The Fuji x100 is a phenomenally successful camera, even 6 months after it hit store shelves it’s still in short supply. I reviewed it myself and fell in love with it but the price tag isn’t for everyone, neither is the fixed 24mm prime lens. In September 2011 Fujifilm announced the X10 which addresses both of these considerations so I figured I would write up a comparison to help people choose between the two. At first glance they look fairly similar as both are based around the same rear screen and controls and a similar magnesium chassis but in fact these cameras will satisfy very different people and produce quite different images. 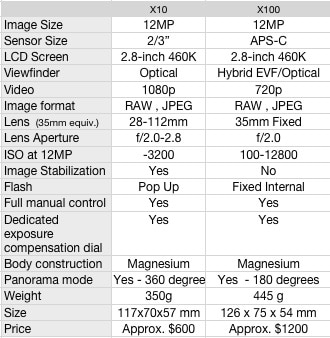 The X100 features an APS-C sized 12MP sensor, roughly the same physical size as sensors in many DSLR cameras like the Nikon D7000 or Canon 7d.  This means that you can achieve comparable shallow depth of field and performance at higher ISO.  The X10 on the other hand features a 2/3″ sensor which much smaller than APS-C and smaller then Micro 4/3.  It is slightly bigger though sensors found in other high end point and shoot cameras which is good because price wise, the X10 is pushing the boundaries of that sector up to a new level.  You can expect ISO performance to be better than other point and shoot cameras but nowhere near as good as it’s bigger brother, the x100.  At comparable focal length and aperture the X100 is going to produce a much shallower depth of field for a more pleasing look but it is less forgiving in terms of getting sharp focus because accuracy of focus is a problem with the X100.  The X10 will have greater depth of focus in it’s shots but this will make it easier to get a perfectly sharp image.  If ease of use is a factor, the X10 will win in that situation.

Both sensors are 12 megapixels though so the image size is identical.  Interestingly the x100 and the x10 both feature a 3:2 aspect ratio for their images. 3:2 is standard for DSLRs but almost all point and shoot camera have a 4:3 ratio image.  I personally don’t like shooting 4:3 at all so I love that the x10 is 3:2 and it will lend a more professional look to the images right out of the box.

One of the standout features of the X100 was the one of a kind hybrid viewfinder that could act either as an EVF or with the flick of a switch an optical viewfinder with digital information overlaid on top.  The X10 only has an optical viewfinder though and this could present a problem because whilst the hybrid OVF on the x100 was very cool, the camera was terrible at focusing in that mode.  I almost exclusively use my x100 in EVF mode, which the X10 does not have….  Of course you could just use the rear LCD screen which is perfectly fine and the same method that most point and shoot cameras use these days.  Those that are fitted with optical viewfinders , like the Canon G12 and Nikon P7100 tend to be highly inaccurate VFs anyway.  If you really want to shoot through a viewfinder then the X100 will be the answer, not the X10.

Only the X10 features OIS stabilization of your images.  This is actually a big bonus and will certainly mean that you won’t need to go to as high ISOs at you would do on the X100.  A good thing as X10 won’t perform as well as X100 in that area.

The X10’s zoom lens goes as wide as 28mm which will be better for landscape style images than the 35mm equivalent of the X100.  There’s no doubt that the 28-112mm zoom will make life easier but will you get “better” images ?  I don’t think so really.  Using a fixed prime lens forces you to think on your feet and create a better composition with what you have to work with.  I love this , but no doubt it isn’t for everyone.   If you need to get photos quickly and keep moving then an X10 will help you.  With the X100 you need allow yourself some time to find the best angle.

As I mentioned in my review of the X100, the video function is crippled.  The focus hunts throughout recording and manual focus is just not possible with the crappy ficus ring on the lens.  It’s also limited to 720p whereas the X10 is capable of 1080p.  In this category then the win has to go to the X10 and the much larger depth of field given by the physically smaller sensor will allow for more accurate focusing.  In theory, shallow DOF video is great but it’s useless if you can’t focus properly as on the X100.  Give me more accurate, deeper depth any day of the week!  So if you want something to capture some great video clips of you and the family on your holidays then the X10 will give you a much better result.

Who will prefer which camera ?

Why do I love the x100?  I’m a professional photographer by day and I shoot with pro cameras like the Canon 5dMKII and Canon 1dMK4.  You come to expect a certain quality and look to your images when you shoot with something like that and whilst I used to use good point and shoots like the Canon S90, I was never truly satisfied with the quality. I always looked at the images and wished I’d shot them with my DSLR.  With the X100 I no longer think like this.  It’s small enough that I take it everywhere with me and the images are excellent with the Fujinon f2 prime lens.

I think that serious professional photographers who want a travel friendly camera will much prefer the X100 over the X10.  Someone who shoots photos for a living will also appreciate the limitations of a fixed 24mm lens and know how to use this to their advantage whereas consumers who are used to point and shoots with a large zoom factor will look upon the fixed lens as a weakness.  There’s no getting around the high price of the X10 though for a camera that is essentially a point and shoot. Whilst they have included a few nice features, like manual zoom and 2/3″ sensor, it’s still going to go head to head with the Nikon P7100 which contains the same amount of controls for $100 less.  This certainly puts the X10 in the premium lineup so if you are budget conscious then I feel there are better options out there.

A further consideration though is that the X100 is quite an involved camera.  It’s designed to be used with a manual aperture ring and use of the viewfinder and overall, shooting with it does feel more like using a DSLR than a point and shoot.  That might not be for everyone though because sometimes you just want to record memories and not make every image as artistically perfect as you can. I get that !  Sometimes it just needs to be easy and whilst you can set the X100 to full auto, it’s too expensive to justify if you are going to use it in that way.  With the X10 though it would be fine to leave it on full auto 90% of the time and then that extra 10% you have the option to use the dials and controls if you felt like it.  I think this is the best looking point and shoot camera that I have seen and let’s be honest, that matter for a lot of people as well.  Plenty of people like to have good looking accessories and this certainly falls into that category.

I think a good way to look at it is that if you own a professional body from one of the big manufacturers like Canon, Nikon or Sony then you will prefer the x100.  If you already own a crop sensor camera like a Canon T3i , 60d or Nikon D300s or D7000 then you will probably be better off with the X10.