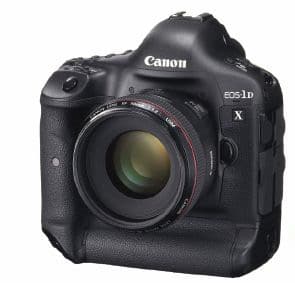 Canon have been listening to the desires of the professional community and implemented a very important firmware update to the EOS-1D X today.  With this update the 1D X will now be able to focus with f8 lens combinations such as an 800mm f5.6 + 1.4x extender, or a 400mm f4 DO + 2x extender.  This has previously been the case with 1D cameras but for some reason Canon decided to remove it from the 1D, much to many peoples annoyance.

The second major fix addresses the illumination of AF points during focus and further details can be found below.

Canon USA have added a dedicated explanation page to explain it all a bit further now.

LAKE SUCCESS, N.Y., October 17, 2012 – Canon U.S.A., Inc., a leader in digital imaging solutions, today announced a new firmware update in response to user requests which further enhances the capabilities of Canon’s flagship EOS-1D X Digital SLR camera. The EOS-1D X will now be capable of AF point illumination during AI Servo AF and cross-type AF for maximum apertures as small as f/8. The new firmware update is available now at no charge from the Canon U.S.A. website and can be downloaded by end users or through Canon Factory Service Centers.

To support the needs of wedding, portrait, sports, wildlife, and theatrical performance photographers working in low light, the new firmware allows AF points in the EOS-1D X’s viewfinder to be illuminated in red when the shutter button is pressed halfway during AI Servo AF, for easy viewing of the selected point. This valuable feature will enhance the photographers’ ability to aim the camera accurately in low-light conditions, and when photographing dark subjects. To preserve exposure-metering accuracy, illumination is intermittent, not continuous. Three choices will be selectable from the menu system – Non-illuminated, Illuminated (Normal) and Illuminated (Brighter).

Cross-Type AF Support at f/8
The EOS-1D X is equipped with an innovative 61-point High Density Reticular AF System featuring up to 41 cross-type AF points, depending on the lens in use. The cross-type AF points recognize a wide variety of subject matter, making them highly desirable for maximum autofocus performance. Until now, cross-type AF on the EOS-1D X has been limited to EF lenses and lens/extender combinations with a maximum aperture of f/5.6 or larger. The new firmware allows cross-type autofocusing with the center AF point even when the maximum aperture of a Canon EF lens/extender combination becomes as small as f/8. Ideal for wildlife photographers and others who often use EF super-telephoto lenses with extenders, this new feature greatly expands the range of EF lens/extender combinations that support autofocus when used with the EOS-1D X.

If AF point expansion is selected with an f/8 maximum aperture lens/extender combination, the four AF points surrounding the center point will act as AF Assist points. This option effectively expands the size of the AF detection area to enhance autofocus performance with subjects that are small in the frame and difficult to track, such as small animals and birds in flight. AF points above and below the center will be sensitive to vertical contrast, while points to the left and right will be sensitive to horizontal contrast.