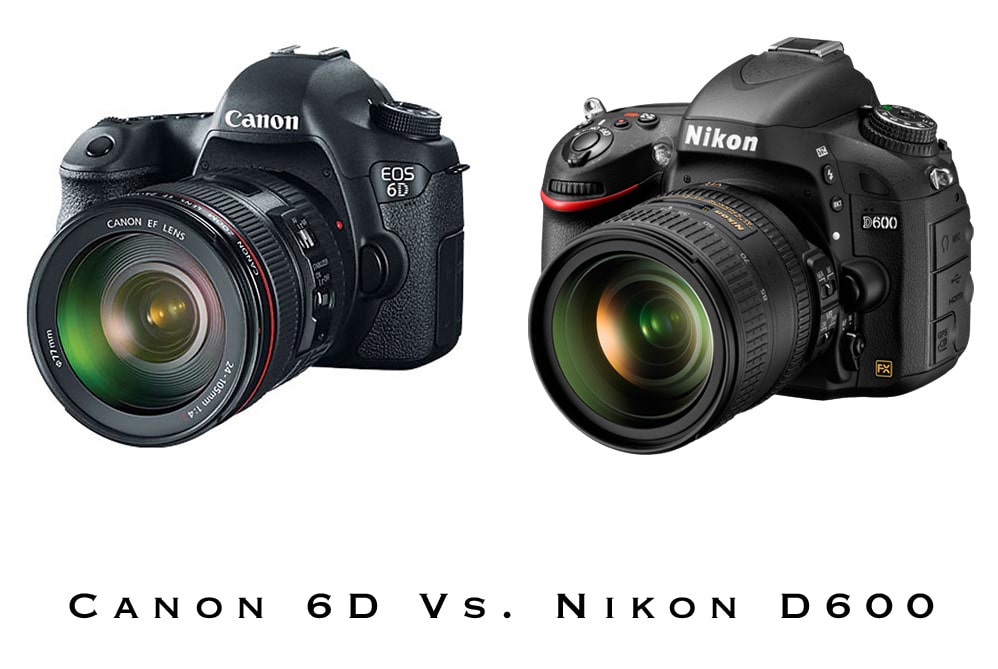 The full frame wars are hotting up and what used to be a feature confined to the pro marketplace has now found its way into the prosumer marketplace simultaneously from the top two manufacturers.  The high cost of CMOS sensor production was the catalyst for ‘crop’ frame APS-C cameras but now that these costs have reduced we can finally get back to the way things are meant to be, the way they always were with film cameras and a 35mm film.  This is an exciting time in the industry and I’m happy to say that both Canon and Nikon appear to have delivered some great products for their first foray into ‘affordable’ some may even say ‘cheap’ full frame cameras, though that is a relative opinion!

So let’s take a look at the defining specs of both these cameras and then talk run though them in a bit more detail afterwards. 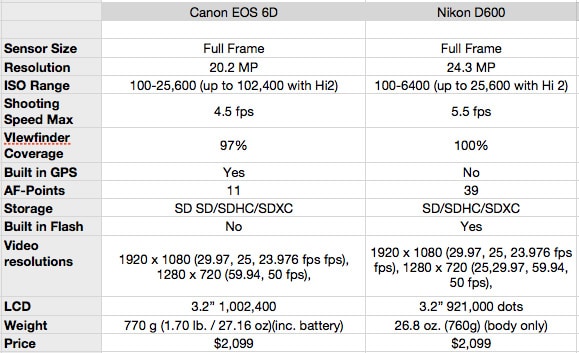 These are set to be the hottest sellers for the second half of this year and supplies might be constrained initially.  I’d advise placing a pre-order with one of these links below ( and yes using these links does help me out as well). Nikon are set to ship their D600 within the next couple of weeks and Canon is set to ship the 6D in December.  Particularly with the Canon camera, if you want to guarantee one for the holiday season you should definitely place a pre-order!

If you play this out via the big numbers ; Megapixels, AF System and Shooting Speed then it appears that the Nikon D600 gets off to a flying start by besting the EOS 6D in every category.  If you dig a little deeper though there are some further considerations to be made depending on what you plan on shooting (as usual).

On the shelves of the big box stores where shop staff sell on the big numbers then the D600 is going to do very well.  24MP Vs ‘only’ 20MP and 39 AF points Vs 11.  For people purchasing on a whim I can see favor falling towards the Nikon camp.  One thing that interests me though is the native ISO range of the EOS 6D.  It is much higher than the D600.  The D600’s second expansion ‘HI’ ISO only equals the highest number in the native range of the 6D.  Now I have NEVER found a camera that produces an expanded ISO on the high end that I could ever see using. There is a good reason why those expansions are often hidden deep in the menus as a custom function, for the most part they simply aren’t good enough and the manufacturers know that.  They are there for emergencies.  The fact that the Canon 6D will go to ISO 25,600 then without dipping into the expansion is impressive.  Even if you don’t need to go that high, it signal a potentially better sensor at high ISOs and that is usually visible at the lower end as well.  It certainly used to be the case that Nikon had the high-ISO edge but I don’t think this is the case now since the introduction of the EOS 1D X.  Every test I’ve seen of that camera Vs the Nikon D4 has then level pegging so we now know that Canon is very capable of a producing high-ISO machine.

Now if shooting sports is your thing then I think with its 39 AF points and 5.5 fps burst rate then I’d have to say the D600 would be a clear choice in that situation.  It is very impressive that Nikon have achieved a higher burst rate than Canon’s 6D even though the resolution of the camera is larger.  Amateur wildlife photographers will also benefit from the D600’s AF system.

Canon has had the edge in this area for a while.  Nikon were late to the party (yes I know technically the D90 was actually first but it sucked so badly…) and they have been playing catch up.  With the D800 and the D4 they were not yet caught up.  Does the D600 change things ? Both 6D and D600 cameras feature the same resolutions and frame rates , they can do slow motion but on at 720p not full 1080p.  Nikon have included a headphone jack for monitoring your audio and that really is a great feature along with the manual adjustment of the audio.  On top of that you can also get a clean video signal out of the HDMI port for recording to an external recorder if you ever want to upgrade the quality of your video.  The 6D is really lacking anything interesting to talk about in this area so Nikon FTW….

This is a pretty simple win for the Canon 6d in this area.  It trumps the D600 by having GPS built in, in fact it’s the first Canon DSLR to do so.  The D600 can geotag images by using an add-on module but for me those a simply too much hassle.  Geotagging is gaining popularity with the map module inclusion in Lightroom 4 and I would LOVE to have a camera that has it built in.  Just set and forget.  Not like the annoying extra dongles that take up your hotshoe space or require extra cables to be plugged into the side of the camera, no thank you.  Internal or nothing.  I can’t wait for this feature to trickle into Canon’s real pro cameras.

So if you plan on doing a lot of adventuring and you want to keep track of your locations then this is a big plus for the 6D.  It also has a tracking recorder to plot your route as you travel around which Is really useful.

Again another big win for Canon as it features built in WiFi and the Nikon requires an clumsy additional purchased add-on.  WiFi for studio shooters is brilliant!  Shoot tethered to your computer …. without a tether!  There is also all sorts of funky ways you can use this at events for sending images directly to a cloud through a portable 3G router, or displaying images on a projector while you shoot at a wedding.  Just like the GPS, these things are a pain in the butt if they need to be added on to the camera, but build it in as Canon has done and you’re on your way.

As you can see with these two cameras it isn’t fair to judge them just by the big numbers.  They are very price conscious cameras, designed to hit the $2100 mark and as such you can’t have everything.  Nikon has gone all out on the sensor and shooting side of things where Canon seems to have held back a bit in favor of adding some really good additional features with the WiFi and GPS.  Realistically the difference in 20MP Vs 24MP is negligible and I’ll discount that for now.  But the AF points and shooting speed WILL make a difference to sports and wildlife people and I think in those situations if I was choosing I would go with the D600.  If I was shooting a little bit of everything with some travel and landscapes then the GPS feature would swing me the way of the Canon.  Even for studio, events and weddings I can see benefits of built in WiFi and the chance of better high ISO images (marginally).  If you really fancy taking the time to make some great videos then I have to say (maybe for the first time ever) that the Nikon offers a better feature set in this area enough to seal the deal if I was trying to choose between these two.  Headphone monitoring is a must-have and having it built in means no expensive and clunky external solutions are necessary.

Neither of these camera stands out as one that would make someone switch camps though.  If one had come out and not the other then I would be saying a different thing because a full frame camera at this price point is a huge milestone.  But with both the big guys unwrapping these just days apart then you can stay loyal to your current lens collection and be happy with either.

My overall impression though is that Nikon in particular have done a great job.  They were not shy about including features in the D600 that are also in the D800.