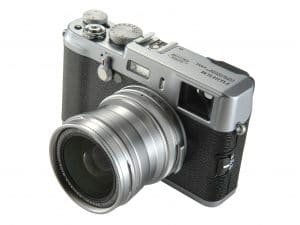 Interesting to see today that Fuji have unexpectedly launched both a 28mm wide angle lens adapter for the X100 and also firmware version 1.3 .  I think it’s pretty safe to say in that case that we can expect to see this camera current for at least another 6 months.  Now would be as good a time to buy one as any.  I still have my own X100 and yes I still love it!  I’ll definitely be taking a look at this adapter when it comes out.

Valhalla, N.Y., May 15, 2012 – FUJIFILM North America Corporation today announced an exciting new premium accessory for the award winning FUJIFILM X100 – a Wide Conversion Lens (WCL-X100) that will further enhance the exceptional photographic experience of using the FUJIFILM X100 digital camera. The new Wide Conversion Lens will not only maximize the FUJIFILM X100’s shooting versatility and performance, but it will also add to the stunning look and feel of the camera with its exacting design similarities.

“We are extremely pleased to offer this new Wide Conversion Lens for the FUJIFILM X100, which has been enthusiastically received from the professional and advanced amateur photographic communities for its beautiful design and outstanding image quality,” said Go Miyazaki, division president, Imaging and Electronic Imaging Divisions, FUJIFILM North America Corporation. “Fujifilm is committed to giving photographers the premium tools that they need to achieve the best imaging results imaginable, and this new lens will allow the FUJIFILM X100 to exceed users’ expectations by opening up countless new shooting opportunities.”

The FUJIFILM WCL-X100, a wide conversion lens made in Japan and designed specifically for the award winning FUJIFILM X100, attaches directly onto the camera and increases picture taking versatility by multiplying the fixed focal length by 0.8x, converting it from 23mm (35mm equivalent) fixed focal length to a 19mm wide angle (28mm equivalent). The WCL-X100 delivers superb optical quality and maximizes versatility of the FUJIFILM X100 by ensuring comparable image quality even at the f/2 wide aperture setting, all while retaining all the original optical characteristics, including the attractive bokeh effect.

Achieving the very best results from the WCL-X100 is simple: select the ‘Wide Conversion Lens’ option in the FUJIFILM X100’s menu system (camera must be updated to firmware version 1.30 or later) or select the function via the Function (Fn) or RAW buttons.

After selecting the ‘Wide Conversion Lens’ option, the FUJIFILM X100 automatically applies image processing to shots taken using the WCL-X100 to reduce image distortion, ensuring balanced illumination across the frame and reduced chromatic aberration which can be commonly found in wide conversion lenses.

The WCL-X100 maintains the full functionality of the FUJIFILM X100, including auto focusing speeds, the 10cm macro capability and of course, the extraordinary hybrid viewfinder. With the optical viewfinder (OVF) selected, icons showing the edge of the frame are displayed instead of the frame rim (equivalent to 80% of the frame field of view), while selecting the electronic viewfinder (EVF) gives users a 100% field of view.

The perfect match for the FUJIFILM X100
The design of the WCL-X100 has been carefully considered to ensure a seamless blend with the FUJIFILM X100. It uses the same materials, textures and colors as the existing X100, plus the optional LH-X100 lens hood and PRF-49S protective filter can be used on the conversion lens. Furthermore, the clip-on lens cap for the WCL-X100 can be attached with both the lens hood and filter in place.