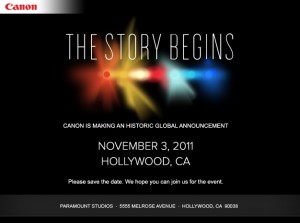 Less than a month now until Canon make their ‘Historical Announcement” in Hollywood.  I’ve received an invitation myself but unfortunately can’t attend. The location of the event clearly signifies a video announcement and NOT a photographic one.  Those of you who are eagerly awaiting a Canon 5dMK3 can take a seat, this is NOT going to appear on this date.

It’s fairly safe to say that we are going to see a large sensor, interchangeable lens video camera.  Canon have taken their time over this product so we ought to see something pretty special here.  The launch of the 5dMK2 nearly three years ago was the catalyst for a lot of changes in the film industry but Canon seemingly took their time with the next step.  The guys over on the Red Center podcast are reporting that 6 or so of these cameras are out in the filed with DPs right now shooting test footage for the demo reels.  ‘Alexa like’ quality was a phrase that was quoted…. but obviously that is handed down information so we’ll have to wait a little on that one.

The big question is where will Canon position this new camera in the market ?  It’s certain that this will not be a consumer product by any stretch of the imagination.  I would expect at least $10,o00 for the body only, which would put it up against the Sony F3.  I don’t think Canon are looking for a fight with the Sony FS100 or Panasonic AF100.  Their DSLR’s are still holding their own in that fight….  There has been a lot of speculation about this product coming in 2 distinct versions and that makes sense given Canon’s current video lineup.  XF100 and 105 , XF300 and 305.  The main differences on those cameras has been connectivity.  I wouldn’t be surprised to see 2 cameras on Nov. 3rd at $12,000 and $15,000.

It’s also pretty certain that the camera will have ability to use PL mount lenses.  A necessity if you are targeting that segment of the market.  The thing is, a Canon camera without ability to use EF lenses would be very odd, so I’d also expect to see some sort of adapter or changeable mount.  Given the popularity of the EF mount for the RED Epic it would be a mistake to not offer EF lenses on these cameras.

The last couple of years has also seen the beginnings of the shift to 4k as a new standard resolution.  Jim Jannard from RED has declared 1080p as dead , but many TV shows and documentaries seem quite happy to continue using it with cameras like the Arri Alexa and Sony F3.  Which way will Canon go ?  If they enter with the pricing I expect them to then they have no need to go with 4k because currently nobody else offers it anyway.  I’ve yet to see something that can handle the data rates of 4k recording at a reasonable price but the unknown factor here is the RED Scarlet.  RED have announced that they are going to go head to head with Canon and launch the Scarlet on November 3rd as well.  Given Jim’s previous rants about the death of anything below 4k, it would be very odd to see a Scarlet at less than 4k.  That said, if anyone is going to back pedal on something like this, I would put Jim Jannard as the man to do it.  My gut says that Scarlet will be 4 though, and about $15000.  Canon will go for on board 2k recording that will use their 50Mbps MPEG-2 codec that was launched with the XF305.  The higher priced variant will allow for 4k out through HD-SDI, giving an upgrade path when 4k recorders come on the market.

What about lenses ?   Not a huge amount of information out there about this but it would make sense to see some compact cine lenses to launch alongside the camera.  They wouldn’t make a pro camera and force people to use the inadequate focus rings on the EF lenses with no manual iris control.  Obviously there are plenty of PL lenses out there already but it would be a missed opportunity if they didn’t make two or three compact zoom lenses like a 16-50 and  24-100.  Again, no real idea on this one other than I can’t imagine they wouldn’t have any lenses on the camera in all the press photos !  Plus they’ll want to package up a ‘kit’ for sale.  An offside possibility is that they will finally reveal the new EF 24-70 and that it will have IS.  In that scenario I can seen them trying to sell that lens as a ‘perfect for video’ sort of lens.

I’m really looking forward to finding out more about this camera and you can bet that I’ll be live blogging that day as Canon and RED announce their wares…..