Browsing some websites and forums this morning I noticed a lot of discussion about the new Canon 60D and how it compares with the 7D.  I can understand this, at first glance it might seem like the 60D has made the 7D somewhat obsolete but that really is not the case.  A closer look at the specs reveals a camera that more carefully fits into the “advanced amateur” category than previous XXD line cameras because of course the 7D did not exist when the 50D was released.  The camera that is best for you will depend partly on your budget (there is a $400 price difference) but also partly on your intended shooting medium.  Video or photos ?  This question is a new one that has to be considered with all of today’s cameras, as if we needed more right?!  Many potential buyers will want to shoot both but I would wager most have a preference for one or the other.  There is also the consideration that these days there are plenty of film makers who are looking to add HDSLRs to their shooting and often they do not care for the photo features. UPDATE: B&H has the 60D in stock right now while they last!!

First off lets take a look at how the main features compare: 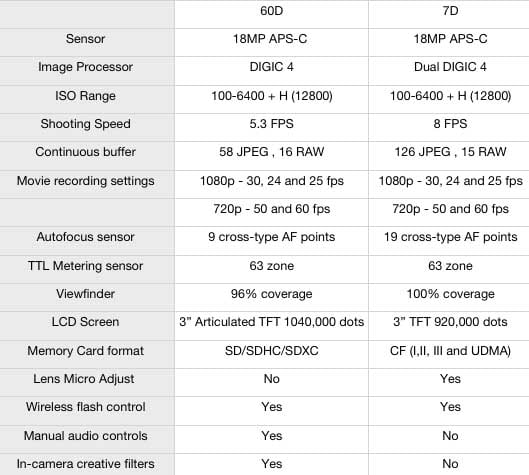 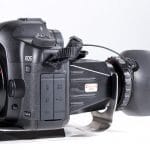 1. The obvious physical difference is the articulated screen on the 60D and for video shooters this is nice addition.  For photos though I personally can’t see it being better than holding your eye up to the viewfinder which would give you far more stability in your shot.  But one thing to consider if you want the 60D for video shooting is that all of the latest LCD viewfinders for DSLRs have been designed to have the finder attached to a mounting on the bottom of the camera.  This means that they will NOT work with the 60D if you intend to swivel the screen AND look at the screen through the viewfinder.  Take a look at the Zacuto Z-Finder for example and you can see what I mean.  That’s not to say that this problems wont get fixed, but for now it might be a consideration becuase using a viewfinder makes it far easier to focus, articulating screen or not.  Of course you could just close the screen and be fine, but if the articulating screen was a deciding factor in your decision then there isn’t much point in that.

2. The next thing to consider is that the 7D has dual DIGIC 4 processors.  The processor is the brains of the camera and having 2 of them dramatically speeds up the pace at which the camera can shoot, and write images to the memory card.  This is the main reason that we see a shooting speed of 8FPS on the 7d and only 5.3FPS on the 60D.  Its also responsible for the much higher JPEG buffer on the 7d.  Having  dual DIGIC 4 also leaves power left over to handle image processing and control noise reduction in high ISO images, the result of which will be better low light performance in the 7D images even though they are using the same APS-C 18MP sensor.  So speed and ISO performance are the next things to consider, do you want to shoot sports ?  Do yo want to shoot indoors a lot, or at night ? If you answered yes to either of those, and pure image quality is a priority then the 7D would be my choice.  In my experience the difference between 5.3 and 8FPS in shooting speed feels like even more than a 2.7FPS difference.

3. Autofocus sensors also differ greatly between these cameras so again this one is going to be important to consider if you want to shoot faster moving subjects like sports, or wildlife that might be running/flying.  The 60D features 9 AF points and the 7D features 19 AF points.  On top of this the “brains” of the 7Ds AF sensor are far more advanced and include more specific focus modes like zone and spot AF focusing.  The 7Ds AF system is far more “intelligent”  whereas the 60D really maintains the same system from the fairly dated 50D.

4. Audio controls differ between the cameras and this is an area where things are a bit backwards.  The 7D lacks the manual audio control that was introduced to the 5dMKII at the beginning of the year, but interestingly the 60D has been given these manual controls.  If you plan on shooting audio on board the camera then this can make a considerable difference to the sound quality.  To me this seems odd.  Every other feature apart from the articulating screen, has been designed to put the 60D firmly in the middle between the T2I and the 7D.  This suggests to me that there might be a firmware update coming in the future for the 7D…..maybe. 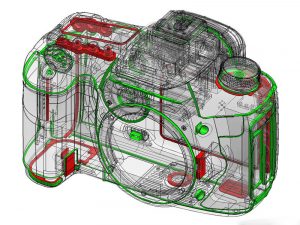 5. Lens micro adjust is a feature that allows you to tailor the autofocus system to each and every lens in your arsenal.  Not all lenses are made equally and many will front or back focus very slightly. For the most part it is not noticeable to anyone but the pixel peepers, but if pure image quality is your main concern then I find it very useful.  I calibrate all my lenses with micro adjust and on some it has made a huge difference.  The 60D does not have this feature but the 7D does.

6. The 7D has a 100% coverage viewfinder.  This means that what you see through the viewfinder is what you get in your image.  The 60D only displays 96% of the image and that can make a difference when you are making an image with very specific composition. Having used 100% viewfinders in my 5dMKII and 1 series cameras I know there is no way I could go back to using anything else.  But if video is you main reason for buying one of these cameras then its not a problem because both screens display 100% of the image so liveview shooting is not affected.

7. Durability, weather proofing and body construction are the final main differentiation for me.  There are other minor details you can see in the table above but the construction differences between the 2 are what I would consider to be the final main point for consideration.  The 7D features a weather sealed magnesium body (shown in the diagram on the right) and the 60D is made entirely of polycarbonate plastic.  Granted, the polycarbonates that Canon are using these days are incredibly strong, not your average plastic, but a magnesium body is still going to withstand more extreme uses.  What is interesting is that the 60D predecessor the 50D did have a magnesium alloy body.  This to me is a clear indication of how Canon wanted to widen the gap between the 7D and the T2i. Which one to buy then?  Purely my opinions here but I would say that if you are looking at either of these purely for shooting video then the manual audio and flip out screen gives the 60D the edge with 2 caveats. Firstly you have to be planning on not shooting the videos in extreme low light and secondly not shooting in inclement weather conditions.  If either of those two things are likely then the 7D takes the lead again.  If you are looking at either camera just for shooting photos then the 7D is the hands down winner.  Faster, better low light, better AF and 100% viewfinder.  I think the $400 difference in price is justified in that respect.  Now for the tricky part, you want to shoot both stills and video in equal amounts…..  this will come down to your preferred subject matter.  If you shoot wildlife and sports then the 7D will give your photos the edge.  If its just landscape photos where AF speed is not a factor then I think you will find the 60D a very competent camera.

The 7D can be purchased from B&H Photo here.  And also from Amazon here.

The 60D can be purchased from B&H Here and from Amazon here.