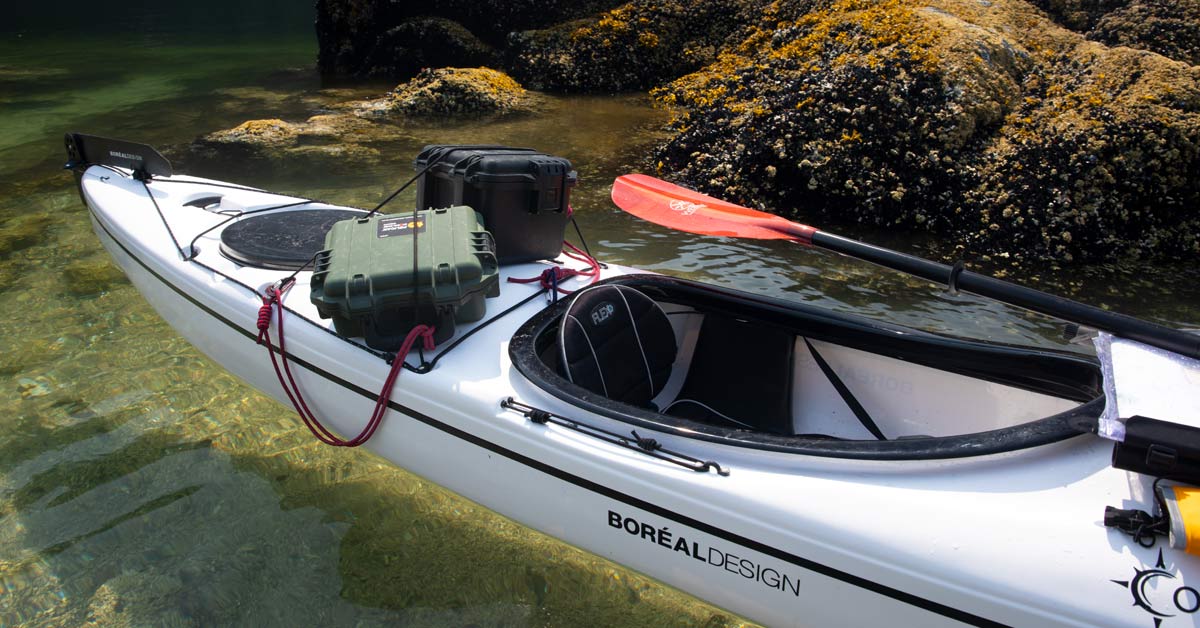 Since buying my new kayak last month I’ve been testing various methods to safely carry camera gear on my trips. First I tried using a waterproof deck bag strapped to the webbing in front of the cockpit. This worked ok on flat water such as lakes, but it proved cumbersome to deal with in less than ideal conditions on a rolling ocean. I also like to take point of view style photos that include the front of the kayak, and having the deck bag there was ruining the shots. The next thing I tried was a thinner dry bag between my legs in the cockpit, and my camera and lenses wrapped in neoprene wraps inside the bag to keep the bulk to a minimum. This solved the issue of the POV shots getting ruined, but again it only really worked well on flat water. Once in the ocean with occasional waves crashing over the kayak, you are of course wearing a spray skirt to seal the cockpit. This then has to be removed to get to your camera, which obviously leaves you vulnerable for a few minutes while you work with the camera. 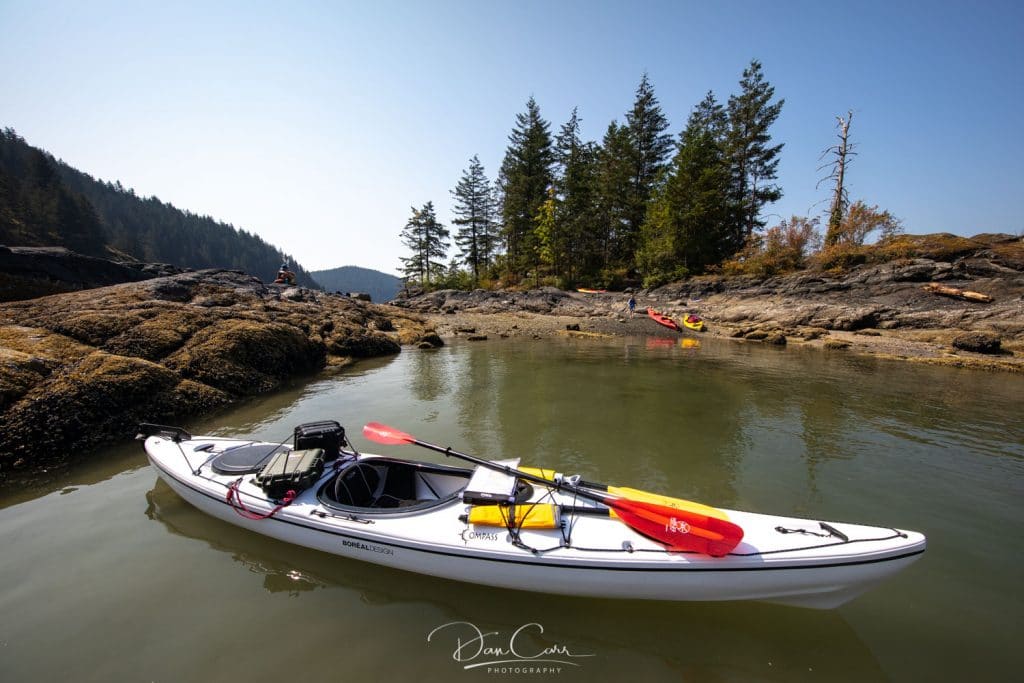 The third method I tested was to use a pair of Pelican Storm cases bungeed to the back of the kayak behind the cockpit. These are then tethered to the kayak with rope and a carabiner just in case they come loose. I used this method for a three-day kayak camping trip up Indian Arm out of Deep Cove in Vancouver this past weekend, and it’s by far my favourite solution. I’m easily able to grab the case from behind me, and so long as you make your tether long enough, that doesn’t need to be unclipped when you bring the case forward to grab the camera. I went with two cases instead of one, because these small cases are small enough that if you need to, they can be fitted through the deck hatches into the storage bulkheads of the kayak. If you go with one larger case, you don’t have that option. In fact for much of this trip I did stow the small inside the rear bulkhead as I rarely needed the two additional lenses that I was keeping in it. 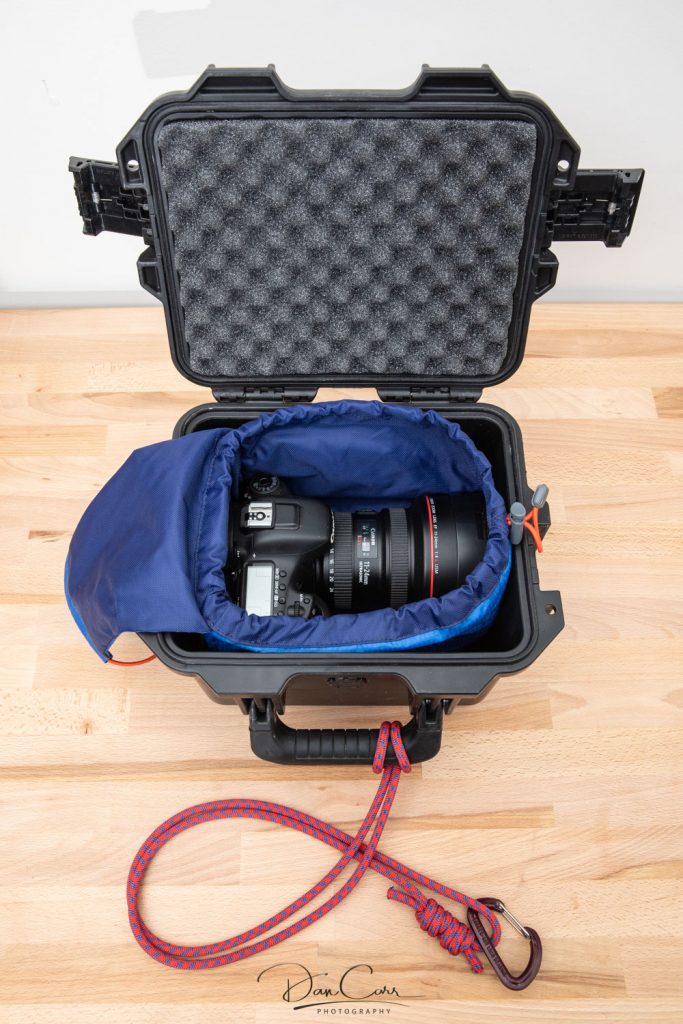 The two cases I’m using are:

I’ve paddled my sea kayak over 100km on various photo and exploration missions in the past month and having thoroughly tested all the options that made any sense to me, I can say with certainty that this is the method I’ll be sticking to. Not only does it give your camera gear some added impact protection,  it also gives you stowage options and a much faster way to put your camera away than if you had to deal with roll-top dry bags. 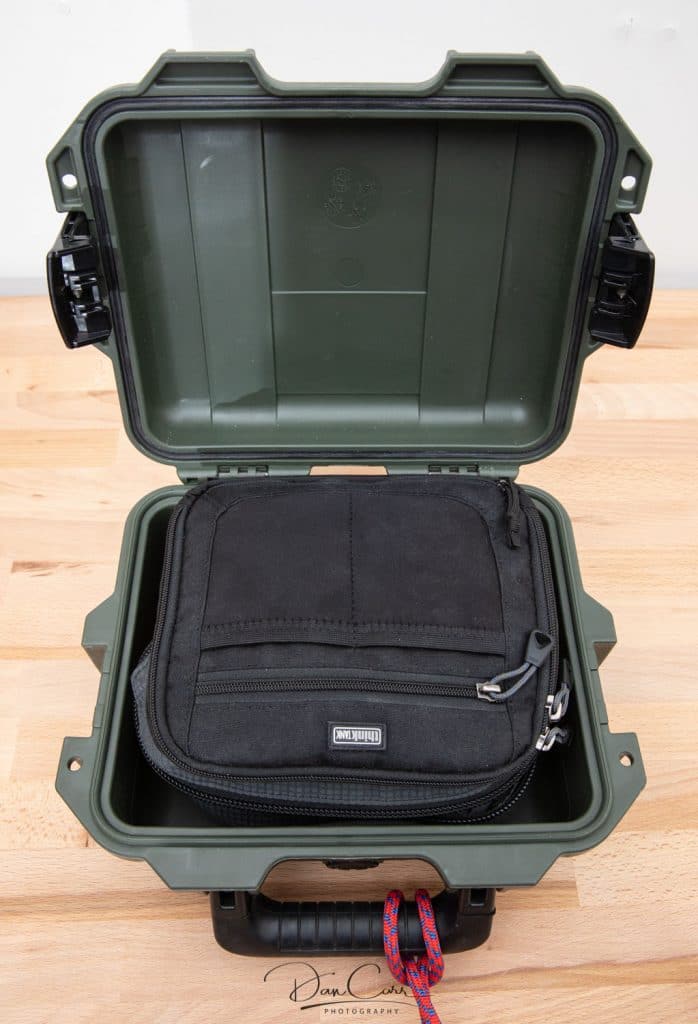 Pelican im2050 case with a Think Tank Speed Changer inside it to protect two lenses, as well as keeping a few accessories tidy.