Behind the Shot: Moonscape Mountaineer

by Dan Carr | Oct 7, 2017 | Behind The Shot, Action and Adventure Photography 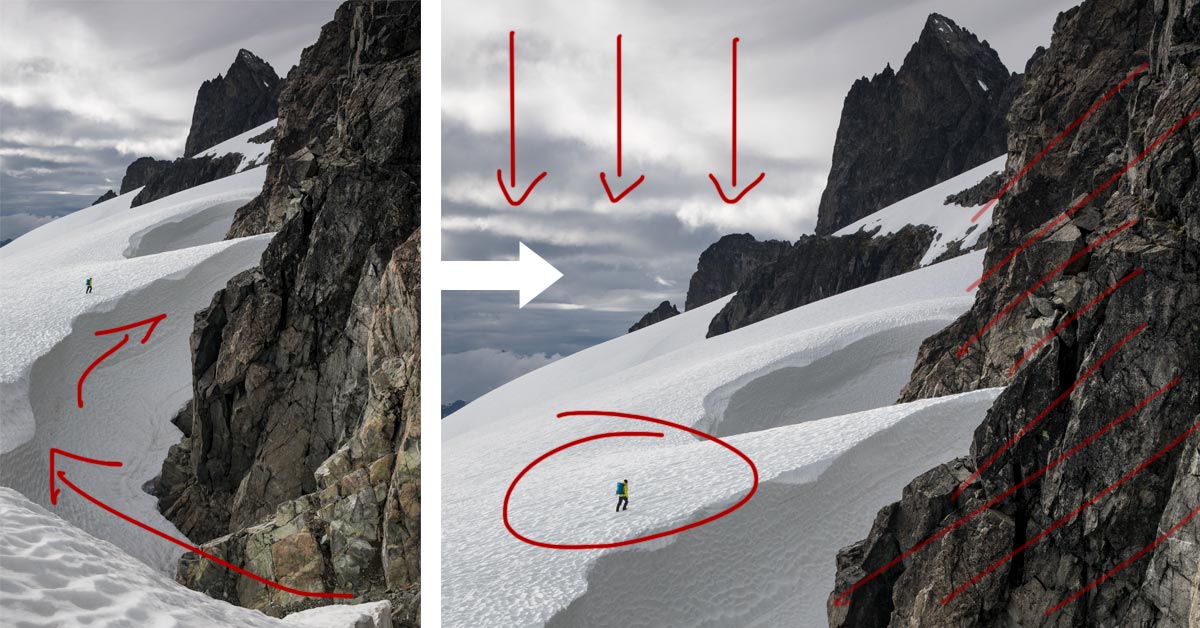 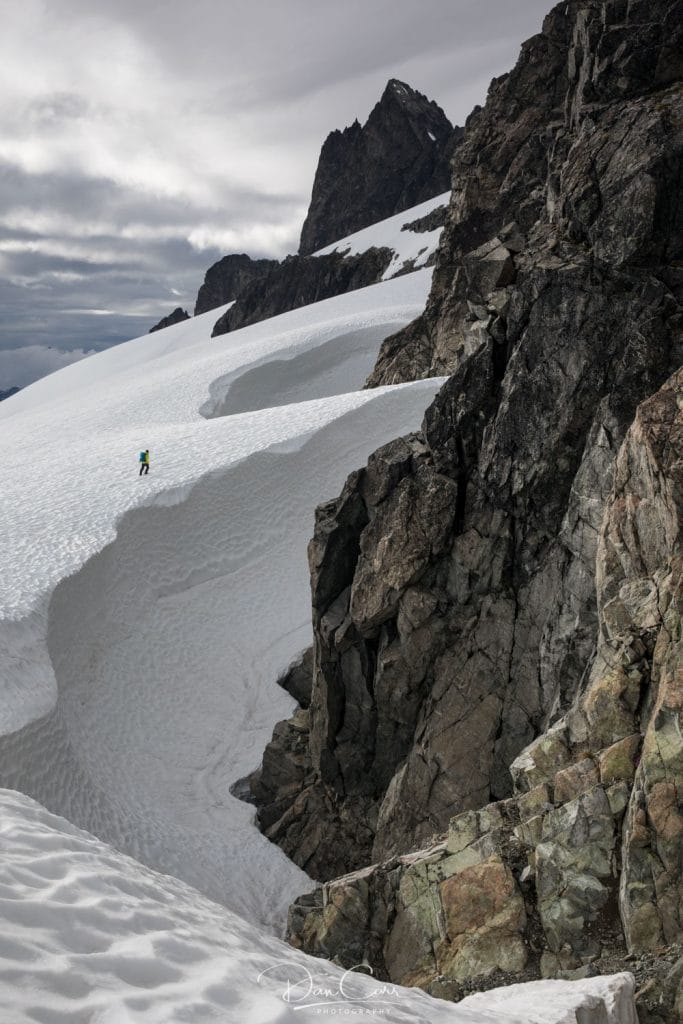 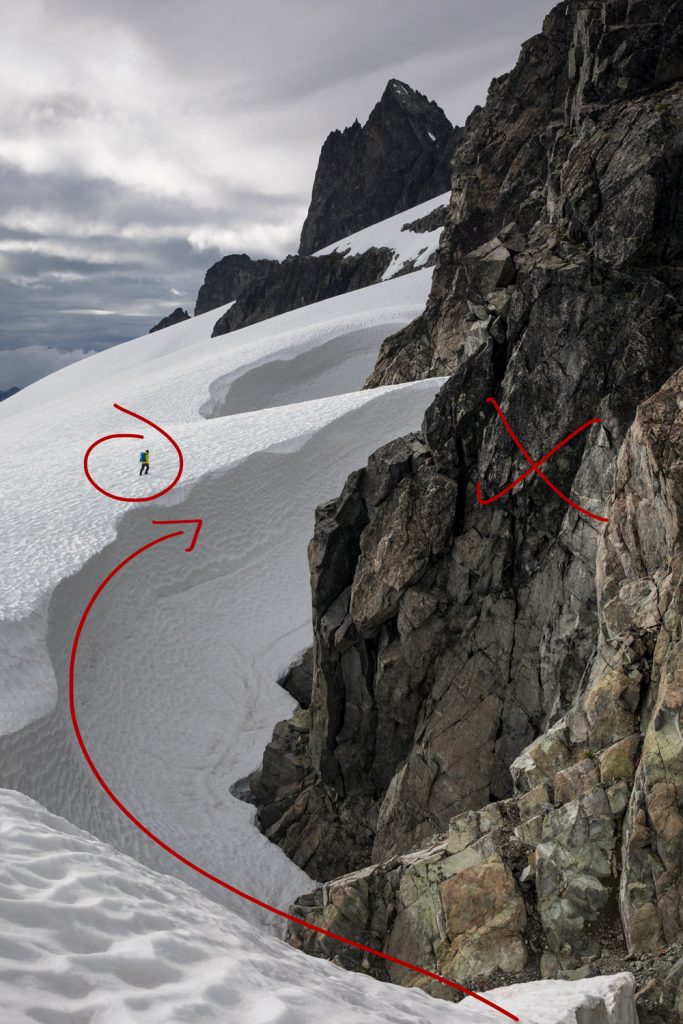 Contrast is once again the key element at play in making this a compelling image, but I don’t just mean tonal (black/white) contrast. Contrast can manifest itself in many forms, and in this case we’re also making use of a contrast in size. The tiny mountaineer, in contrast with the huge rocks and precipitous looking drop next to her. Contrast, in any form, is always a compelling thing to see in an image! A wide angle lens was a key factor, allowing me to take in more of the rocks which were to my immediate right-hand side.

As the mountaineer walk up the snow, I also continuously altered my shooting height to find the best position. Ducking down a little bit gave me more of that lovely foreground snow texture, and also insured that the person was on a nice clean white background. More contrast! This time it’s the tonal contrast of the person on the white show, picking them out very clearly in the image, even though they are tiny. They are instantly visible in the shot as the main subject.

The other thing that I was very aware of was the curving snow line that draws the vision right through the image and directly to the subject. It was this curve that got me to get my camera out of the bag when we got to this point, and I immediately saw the opportunity to get something awesome. Leading lines are obviously great for pointing out your subject, but they’re also really important for drawing the eye through an image and past other important aspects. In this case, the awesome foreground snow textures are super important to this shot, but you wouldn’t want someone to linger there and not end up at the subject. The curving line draws they eye to the subject, but also right through all the other great features of the shot.

Clearly defined subjects are important, but so is visual balance. In this case the sharp contrast of the tiny figure on the white snow is a very strong visual element, but that means the right-hand side of the frame should offer something in the way of balance. This image would not have worked if the right side of the frame was white and snowy. It needed something more interesting and visually compelling on that side, and preferably something contrasting. In this case the dark rock nicely balances the white snow, and the size of the rock nicely contrasts the the tiny size of the figure. There’s a lot of elements in this image, but hopefully you feel as though they are all in balance with each other? Let me know in the comments! What you usually don’t want to have is an image that has all of the strong elements clustered to one side. When you do that, it feels awkward, and it’s not an efficient use of framing.

Visual balance is definitely a tricky concept, but I think this image is a helpful one in understanding how so many lines and objects can coexist in an image, yet still feel balanced and deliver a clear subject.

As is my usual style, I really tried to work with the conditions to create a pleasing image, rather than relying on post processing techniques. People will often comment on how few photos I take when I’m out working (or having fun), and the main reason for this is that I understand what the camera is capable of capturing, and what it is not. A situation might be “epic”, but if the light and contrast isn’t there, I’m not a huge fan of faking it in Photoshop and Lightroom. The result is that I take a small number of images, but I’m usually very happy with the ones I get. Just taking this particular shot as an example, we climbed around this area for a few hours, and I took less than 40 photos, 32 of which were simply slight variations on this particular shot, as I experimented with framing and compositional balance while the person walked further up the snow line. At 7fps, it’s just a few seconds of photography out of several hours of hard work.

One exceptional photo from a day or two of work is all I really need to be happy though! I love this image.

Anyway, I digressed for a second there… let’s talk about what I did do to the image! The clouds in the top left of the frame were quite bright and some detail was being lost, so I used a graduated filter up there to bring the exposure down a little, and then bump up the clarity (mid-tone edge contrast) which does wonders with grey clouds. Since the eye tends to gravitate to bright spots, this helped to quash that, and direct vision back at the mountaineer. 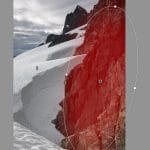 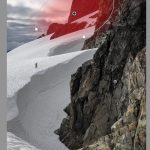 The next thing I did was to use a radial filter over the rocks on the right, with a very soft edge transition on it. Once I placed that, I used it to lift the shadow detail there, and again add some clarity to bring more definition and perceived sharpness to the rocks.

The third thing I did was to place another radial filter on the peaks at the back and bring down the shadows there to make it look a little ore dark and ominous.

As you can see from a before/after shot, the overall look of the image is only altered very subtly and almost all done, as usual, with selective adjustments rather than the global ones. Why is that? Global adjustments do a poor job of guiding vision because they work across the whole image. With local adjustments such as the grad filter and radial filters, it’s like an extension of the original compositional process, and gives us a few extra tools to help guide the eye and tell the story in a more efficient way. 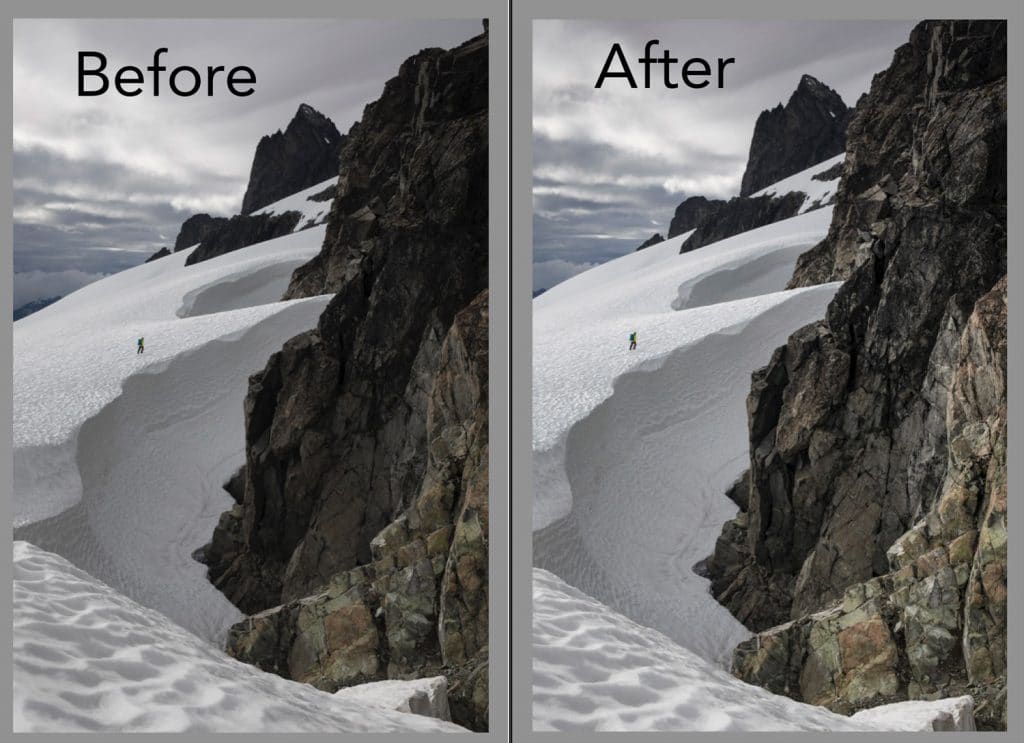 Subtly changes! But that doesn’t mean they don’t make a difference.

Little House on the Prairie 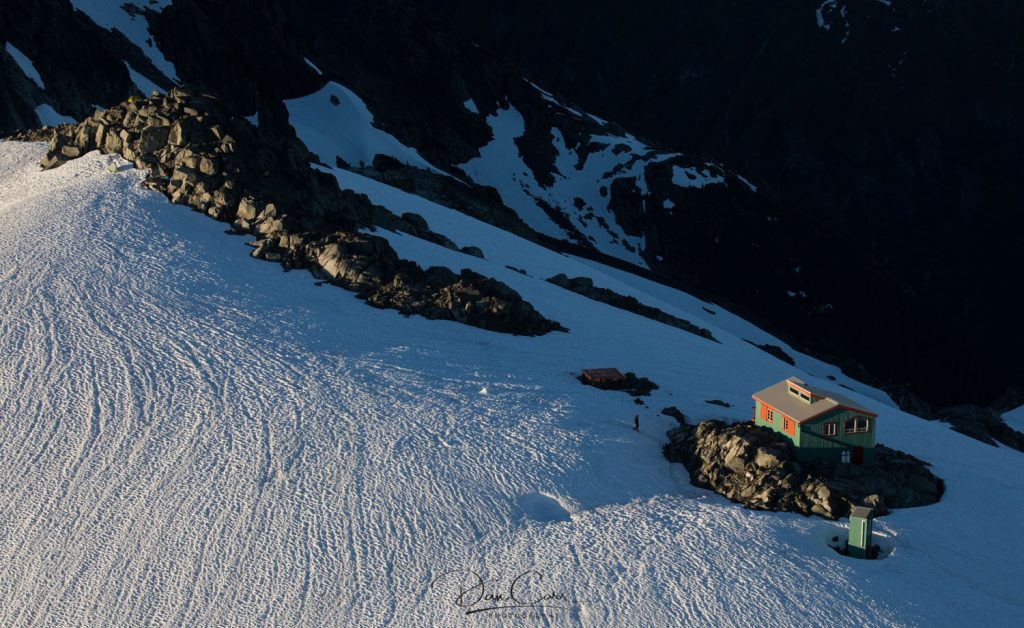 This is the Jim Harberl hut, situated at 2,030 m (6,660 ft) in the Tantalus range above Squamish in British Columbia. It’s run by the Alpine Club of Canada, and available for anyone to stay in once you’ve booked your spot. For this trip we flew into it with a helicopter, but it’s also possible to hike at certain times of the year. It’s far from an easy hike though, and a lot of people would rather preserve their energy for activities in the alpine!

This photo of the hut was taken from an area on the overlooking ridge line, a short distance from the spot where I took the featured Moonscape Mountaineer image.