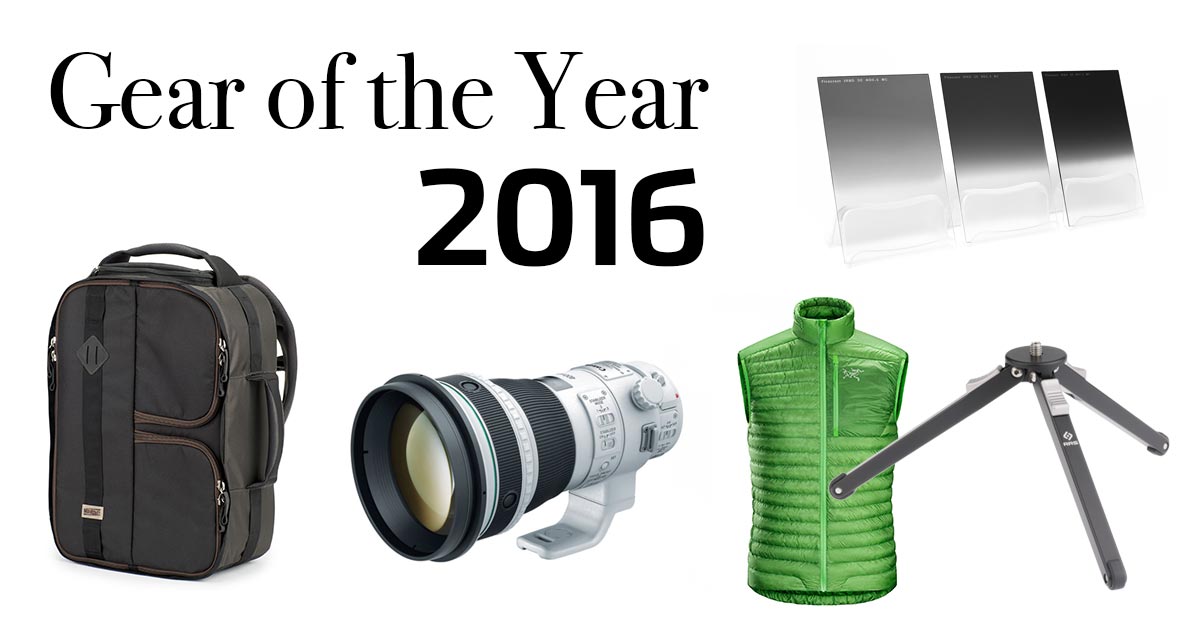 Last year I began a new blog post series called Gear of the Year, where I talk about some of the new photo gear that has impressed me over the past 12 months. With another lap around the sun completed, it’s time to check in and let you guys know about my favourite items from a 2016 that was packed full of exciting photography opportunities.

This year I’ve added a several important new lenses to my arsenal, and changed my primary camera, as well as testing numerous other photography bags and backpacks, accessories and computer-related peripherals for editing purposes. So what’s going to make the cut?!

In 2015 I included the astonishingly versatile Canon 100-400 f/4-5.6 L IS II in my gear of the year list, due to it’s incredible sharpness, small(ish) size, and very respectable performance with the 1.4x extender. It was a lens that paired perfectly with the Canon 7D Mark II to make a lightweight wildlife photography setup.

In 2016, I decided to add the 400mm f/4 DO IS II to my kit before Canon raised lens prices across the board in the first quarter (view unboxing). The original version of this lens was never regarded that highly by the masses, but Canon spent well over a decade perfecting the diffractive optics formula before launching a replacement, and the result is something pretty special. The size of the lens is the first thing that strikes you about it, it’s really the first super-telephoto lens that I’ve owned where you don’t have to make specific changes to your carrying plans in order to take it with you. With larger lenses like my Canon 200-400 f/4, I need to carry it in a much larger backpack, and I need to consider its weight wherever I go. It’s simply not a lens that you can carry around just in case it might be of some use at some point. I’ve found that this isn’t the case at all with the 400mm f/4 DO II, though. It’s small enough that I can pack it into any of my camera backpacks, or even small shoulder bags. The included lens hood does add some volume, and size restrictions, but I purchased the Aquatech Soft Lens Hood, which alleviated some of those concerns and gave me much more flexibility in that regard.

Once you’re been stunned by the small size, you’re then impressed by the light weight of it! This is a lens that you can easily hand-hold all day long, so that means in-turn, that you don’t need to cart around a big gimbal head for a tripod as well. Another weight saving over using my larger lenses! In-fact, this lens is so light, and nicely balanced, that you can comfortably hand-hold it with the Canon 2x extender mounted to it, and still get sharp images at 800mm. A hand-holdable 800mm f/5.6 lens?? Yes!

The third reason that this lens makes the list, is the staggering quality when used with the Canon MKIII extenders. And when I say staggering, I really mean it. Look at the example below… it’s going to blow your mind! Extenders (sometimes called teleconverters) have a bit of a bad reputation among a lot of photographers, but I’ve always been a firm proponent of them, and many of my very best images have employed their usage. That said, I’ve always had much more more luck with the 1.4x extender, and the 2x has been reserved for very special circumstances. When I got the 400mm f/4 DO II, I had heard good things about its performance with the 2x though, so I made sure to test it out, and I was speechless when I saw the results. Yes, AF speed suffers with this extender, but sharpness is barely affected. Like I said, the sample below speaks for itself!

I’ve been using MindShift Gear bags for many years now, and I’ve been fortunate to test almost their entire lineup of products. For those that don’t know, MindShift is Think Tank’s sister company, and they concentrate on camera carrying solutions for the outdoor and and wildlife photography market. This year they partnered with famed photographer, Moose Peterson, to reincarnate his own backpack design from several years ago, and fold it into the MindShift backpack lineup with some nice improvements. The result is three bags, the MP-1 V2, MP-3 V2, and MP-7 V2.

I’ve been using the MP-3 V2 for several months now, and I believe this will be the most popular size in the lineup. The clever, sectioned design of the bag makes organization a breeze, and there’s never been another bag out there that so easily carries multiple cameras with lenses already attached and waiting to go. I love carrying a super-telephoto lens on a camera on one side, and then a second camera on the other size with a 24-105.

The bags also feature a wonderfully useful pair of removable zippered pouches that allow you to store smaller accessories wherever it’s most convenient. Just use the hook and loop attachment to stick them into any one of the three compartments! Something else that’s worth noting is that the divide on the right-hand side between the two smaller compartments, isn’t fixed. You can remove this, thereby allowing you to carry two large super-telephoto lenses. Perhaps a 600mm on one side, and a 200-400 on the other side, giving you ultimate flexibility on safari.

As we’ve come to expect from Think Tank and MindShift Gear, the quality of the pack is exceptional, and there’s a host of nice design touches, like zipper covers that protect from dust and sand when the bag is stood on its base. Or hide-away backpack straps for ease of stowage during travel and storage. This is by far the best camera bag that I’ve ever worked out of. And by this I don’t necessarily mean the best bag overall, but when it comes to finding your gear, having fast access to it and organizing things, I’ve not used anything better. If you’re a wildlife fanatic that’s going on safari, or covers a lot of ground in your car with a camera bag on the passenger seat, this is the bag you want to have with you for that purpose.

Free gift from MindShift Gear – Recently they launched a new program where you can get a free gift if you spend over $50 in their online store after you’ve clicked on one of my links. More details about this offer can be found here.

A good pocket tripod is something that comes in handy for places that don’t allow large tripods, or when you want to keep your kit ultra light on long hikes. If you have two cameras, it’s also a great way to put your backup camera to use shooting a second angle, or perhaps a timelapse while you work with your primary camera. The problem with most pocket pods is that they simply aren’t designed with pro-sized gear in mind, but that’s not the case with this little beauty. The TFA-01 Ultra has ratcheting legs, just like a full-sized tripod, so it can hold the weight of a full sized camera, and a general zoom lens up to something like a 24-70 or 24-105. When paired with the BC-18 Microball, as in the photo above, you have a truly professional, yet pocket-sized support solution.

I spend a lot of my photography time outdoors so comfort is important in the cold while I’m waiting for, or working for the shot I’m after. This year I purchased the Cerium SL vest from Arcteryx, and it now lives in whichever bag I’m carrying with me, whether it’s a camera bag, or a daypack for non-photographic purposes. The vest weighs just 4.2 ounces, and scrunches up into a tiny bag that will easily fit into the pocket of another jacket, or an unused nook of a camera bag. Trust me, you’ve got room to carry thing, I promise you!

I know that technically it’s not camera gear, but it’s just so bloody brilliant that it had to be included.

Early in 2016 I re-built my entire filter kit from the ground up using Formatt-Hitech Firecrest filters after using the Firecrest 16-stop ND filter in 2015, and being very impressed with its quality. Many of my old filters were also from the same brand, but in particular, the graduated filters were older resin filters and I wanted to swap them for newer glass Firecrest ones.  I purchased a set that included a 2-stop, 3-stop and 4-stop soft-edged grad, and I’ve used them extensively all year long. Resin filters are lighter and cheaper, but they scratch very easily, so the glass ones have been a nice upgrade for me.

Save 10% on Formatt-Hitech filters using the coupon code DanCarr10 in either their International store or their US store.

Why no Canon 5D Mark IV on the List?

The Canon 5D Mark IV is an important camera for me because the Mark III was my primary camera for so many years. Of course I immediately jumped on the Mark IV when it came out, and I love it. Whilst it’s a great camera, and it feels right at home in my hand, it isn’t anything truly spectacular when compared to the previous version. The sensor is a big step forwards in terms of dynamic range, but as an overall package, I didn’t feel as though it really lit my fire enough to be classed as “Gear of the Year”. If I was doing a “top ten” list from 2016, it would most certainly be on there, but I’d rather keep things shorter and not force myself to pick a specific number of items.