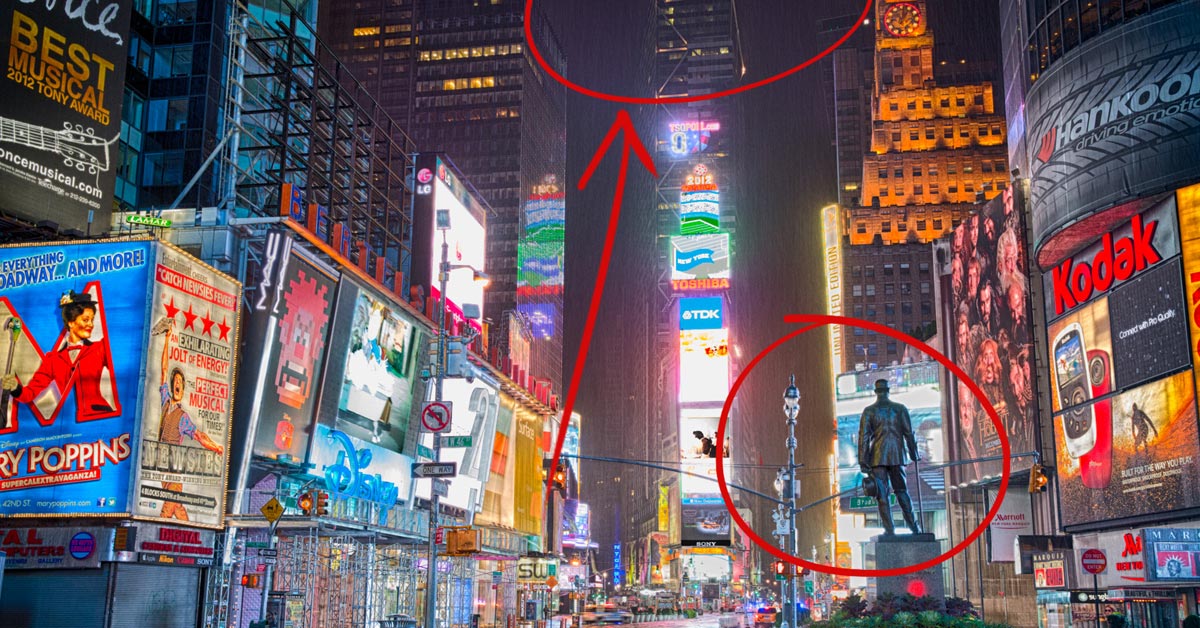 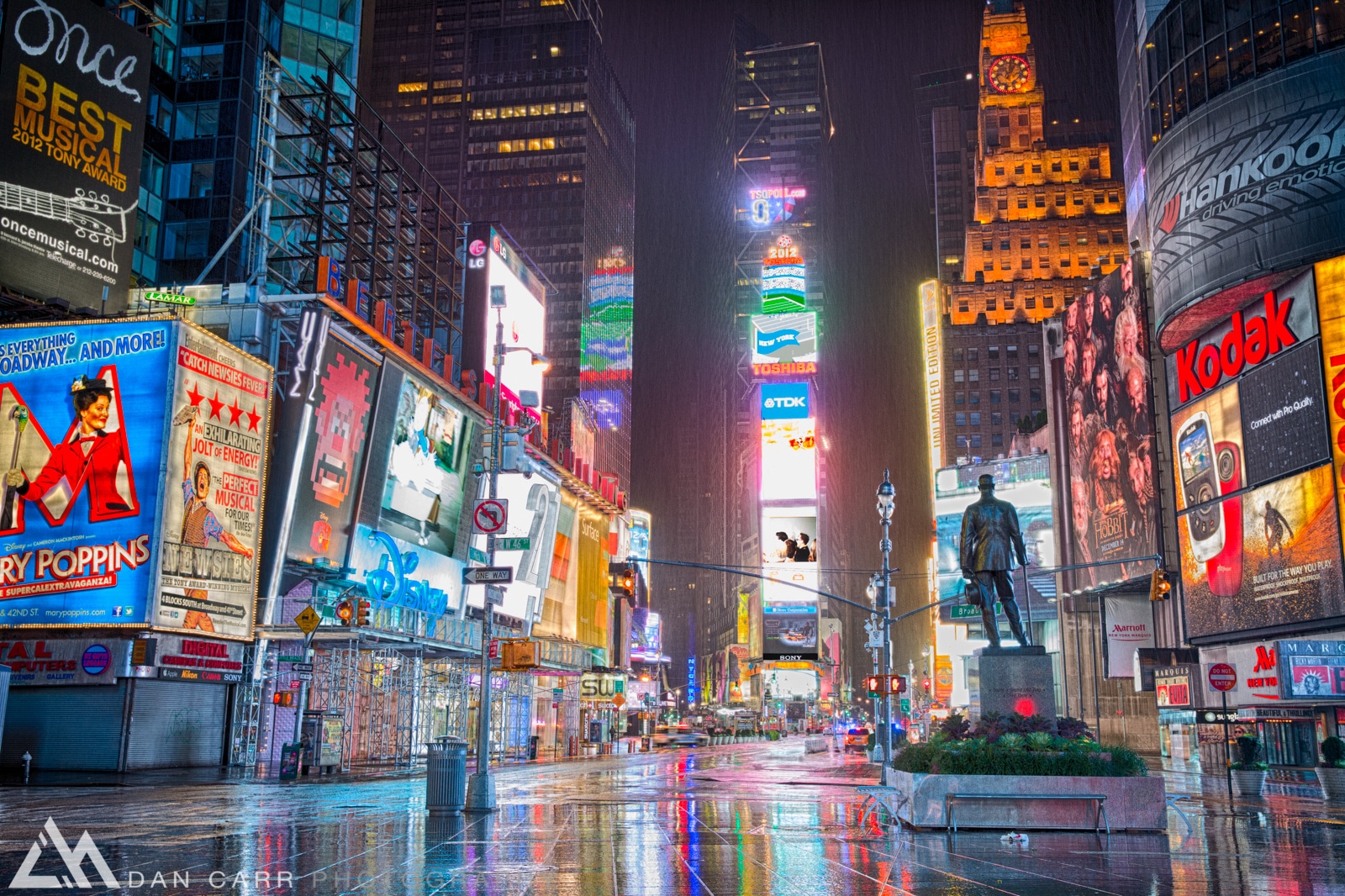 I happened to be in New York City for some meetings at the PhotoPlus Expo trade show when Hurricane Sandy struck, and it allowed me to capture a very unique image that went viral right after I first published it online. What you see in the photo is Time Square, usually one of the busiest place on this planet, but this time it’s empty.

Let me roll the clock back a bit on the evening…

After I left the last meetings at the show, I headed back to the hotel and it was clear a good sized storm was on the way. I’m not an avid watcher of TV news, so I wasn’t initially aware of the impending disaster, but things became much clearer when I walked into the lobby of the hotel where I was staying.  They had wheeled a giant TV into the lobby, and all the staff were gathered around it, transfixed by the protected maps that charted the storm’s path. Clearly this was pretty serious, but I retired to my room and begun to pack my bags for a morning flight back to Canada.  I flicked the TV on while I did this and after a while, reports started coming in of hugs tidal surges and rising water levels around Manhattan.  It became pretty clear that things were going to get worse and at this point the bridges were shut down, stranding everyone on the island.

The previous all time record from the 1800s was an 11ft tide and Hurricane Sandy brought 14ft heights in no time at all.  Coastal cities in New Jersey were expected to suffer but nobody thought that huge sections of the FDR in Manhattan would go under water and some parts of the subway system filled right to the to top.  It was a sobering sight to see on TV and at the same time watch the number of emergency vehicles rushing around otherwise deserted streets from the hotel window.

After a while I got photographer’s itch….. with rain falling hard and no proper wet weather gear with me (hey I hadn’t planned on this!) I knew if I was to make some photos it would have to be close to my hotel, especially since the roads had been cleared of all transport – foot traffic only.  Walking the streets was eerie, there were people but not many.  Far more cops than anyone else.  I set off for Time Square and decided that a photo of such an iconic place, so famous for being bustling with people and life, would make an interesting image on a night like tonight where there was sure to be very few people. 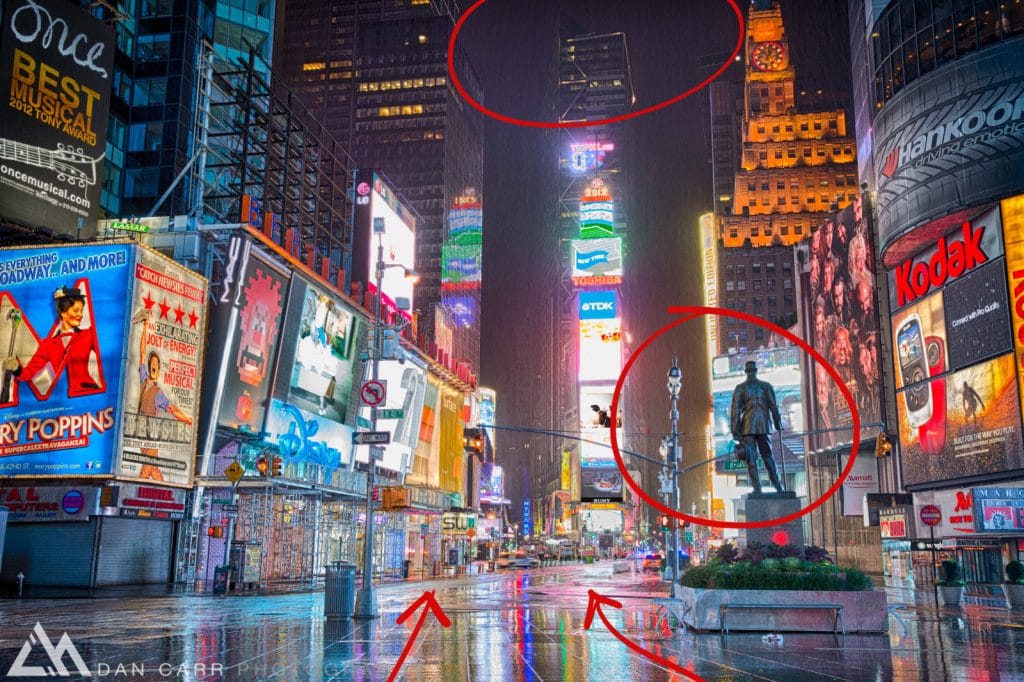 I used the Canon 24-70 f2.8 MkII on my Canon 5D MK3 and put the whole thing onto a Really Right Stuff TVC-24L tripod which I kept low, only 12 inches off the ground to accentuate the reflections on the pavement.  I used HDR, which I hardly ever do, but this sort of scene just screams for it.  It was processed in HDR-Effex 2.0 from Nik Software. The only cars you see in the background are police cars and there isn’t another sole on the street here.  It was a very strange site to see and it might be unique, a once in a lifetime shot.  I took off my jacket and wrapped it around my camera to protect it from the torrential rain which meant I was soaked to the skin in just a few minutes and back in my hotel not long after that to dry out and warm up.

In such a busy scene, it’s hard to compose things without it seeming like you chopped off something important.  The biggest conscious decision that I made was positioning the statue directly in the middle of the electronic billboard that was in front of him.  This really helped it to stand out more, and I wanted it as one of the main interests of the image, silently watching over the empty streets.

Keeping low to the ground accentuated the reflections, and also elongated the lines in the pavement, helping to use them as leading lines that draw you deeper in to the shot. The sightly longer exposure time helped to blur the raindrops slightly, and I think this gives a good sense of the torrential nature of weather, particularly in the middle of the shot away from the neon lights (click the image to view it a bit larger).

Back at the hotel after my quick excursion it was a somber feeling.  Many of the staff were unable to get home across the bridges, and could only watch on TV as their homes were flooded and destroyed before their eyes. Thankfully they were in phone contact with their families, but it’s still something you never wish to see.  Definitely an evening I’ll never forget, and no, I didn’t get to fly home the next day… the airports were closed for another two days.