Behind the Shot: Nine Queens , Winning Image From Austria 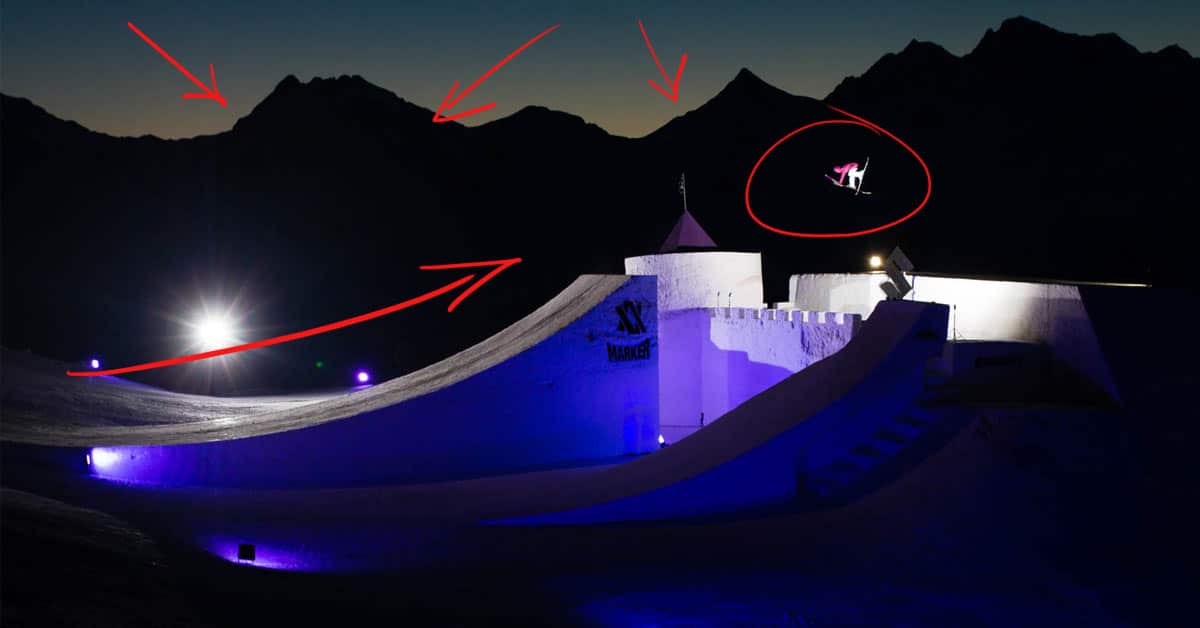 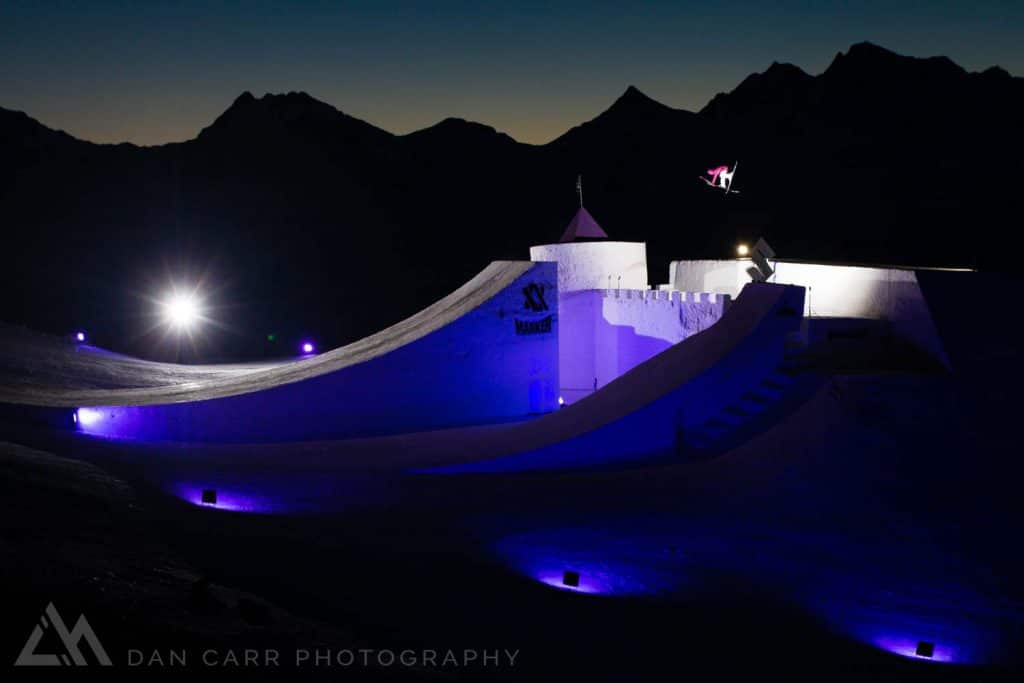 I was invited to Austria to take part in a freeskiing photo competition at the Nine Queens event. Four photographers were chosen to attend and we spent the week shooting the skiing action as sunrise, sunset and night time. At the end of our time there, we submitted our photos and various prizes were handed out. This image won the main award for Best Action Image.  The skier in the shot is American Olympian, Keri Herman.

There’s quite a lot going on here so let’s break it down into different sections:

One of the main features of the shot is the silhouetted mountains in the background, not only do they represent a great area of contrast in the image which is always visually striking, but they also set the scene for the geography of the area. Without that, the jump could be a in a city park for all anyone would be able to tell. The photo was actually taken about an hour after the sun had gone down behind the mountains, but using a long shutter speed (a technique sometimes called dragging the shutter) I was able to wrestle every last little bit of light out of the background, and also introduce some nice colours. Shooting an action image at 1/50 of a second isn’t always an obvious thing to do, but we’ll get to that technicality in a second…

The second major compositional choice for this shot is to use the mountain silhouette line to effectively mirror the line of the coloured LED lights on the ground. I lined up the purple lights as best I could to mirror the peaks of the mountains in the back.  This creates a sort of left-to-right funnel for the viewer to move them from one side of the shot to the other. We often think of leading lines as being really obvious singular lines, actual line in an image, but sometimes it’s possible to construct something much more subtle like this visual funnel. The line of the jump is clearly picked out by the flash as well, and this adds to the lines that all point towards the skier.

The skier is also carefully positioned in a nice clear area and lit so that she stands out well on the solid black background. Colourful clothing adds colour contrast, and her small size against the big mountains creates a further interesting contrast. I say it all the time, but contrast is king when it comes to creating an interesting image. It can be size contrast, tonal contrast, colour contrast or even textural contrast, we’re drawn to all of it!

NOTE: Even with the small size of the athlete in the frame, you can still see that she is getting the grab on her ski. Read this previous post if you don’t understand the important of this seemingly small point. 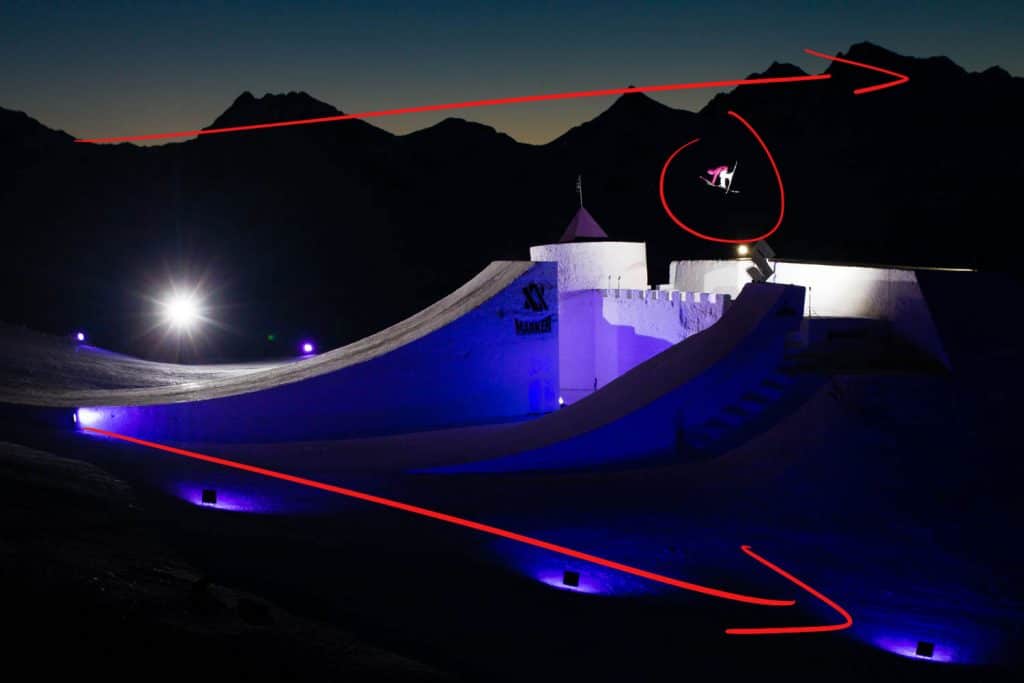 The big flash that’s clearly visible in the shot on the left side is an Elinchrom ranger on a 12ft lightstand at full power. In an ideal world, I probably would have had it out of the frame, but since I wanted to shoot this photo pretty loose, it had to remain in there. The flash is aiming slightly back towards me and that creates some nice contrasts in the obstacle, just as if you were shooting with a backlit shot using the sun. The second flash is a little more hidden on top of the jump and pointing towards the skier.

The skier herself is tack sharp, even though the shutter speed was only 1/50th and she’s flying quickly through the sky. How is this possible?

When working with flashes like this, it’s the burst of light from the flash that is freezing the action. The flash duration of my flash is around 1/1000, so the skier is only illuminated for 1/1000 and the rest of the time her motion happens in effective darkness. As the shutter opens, the flash goes off and freezes the skier into the image, then the shutter remains open for the remainder of the 1/50 second exposure, effectively “painting” in the background of the image using the remaining ambient light. If none of that ambient light falls on the skier, the only thing you see of her in the photo is what was lit briefly during the flash pulse.

Understanding this concept is a HUGE step to mastering flash, particularly with action sports imagery.

I also won the prize for Best Creative Angle in this contest, but I’ll save that shot for another day 😉