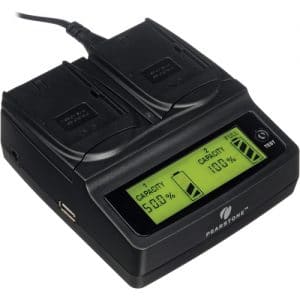 One of the things that I was happy to see at the launch of the Canon 5D MKIII was that they have kept the venerable LP-E6 battery that was first introduced more than three years ago with the MKII.  I’ve always been amazed at it’s capacity and in the last few years several third party accessory manufacturers have also adopted it for powering video equipment accessories such as LCD monitors of external video recorders.  Of course it’s also been used in the 7D and 60D!  In other words, if you are a Canon shooter then the chances are you have one of these batteries and the standard Canon battery charger lying around somewhere.  Wouldn’t it be nice if you could charge two at a time though like the Canon 1-Series battery chargers?!

Well this is where the Perastone Duo Charger comes in.  With it’s large and seemingly informative LCD display it certainly looks impressive at first glance and at a price of $79.95 should allow you to charge twice the batteries for the only slightly more than the single Canon charger.

The first thing you’ll notice when you go to plug in a battery is that the charger is generic and there is an LP-E6 mounting plate on top of it.  In theory this could be a nice feature as it makes it somewhat redundant and presumably possible to add extra adapters to the charger to deal with other types of batteries.  In practice though it’s a little annoying as the adapter plates often come loose, particularly when removing the battery after a charge.

The second thing I noticed was some very erratic information displayed on the LCD screen.  The screen should display the percentage power for each battery but for some reason it constantly jumped about between the correct information and 0%.  More often than not, a second battery would continually display 0% charge up until the point at which it began to charge (after the first one had finished).  Confusing and irritating.  I have since noted another review where the 0% phenomenon has been mentioned so it seems like it’s not limited to my unit.

All of these photos were taken just a few seconds apart. 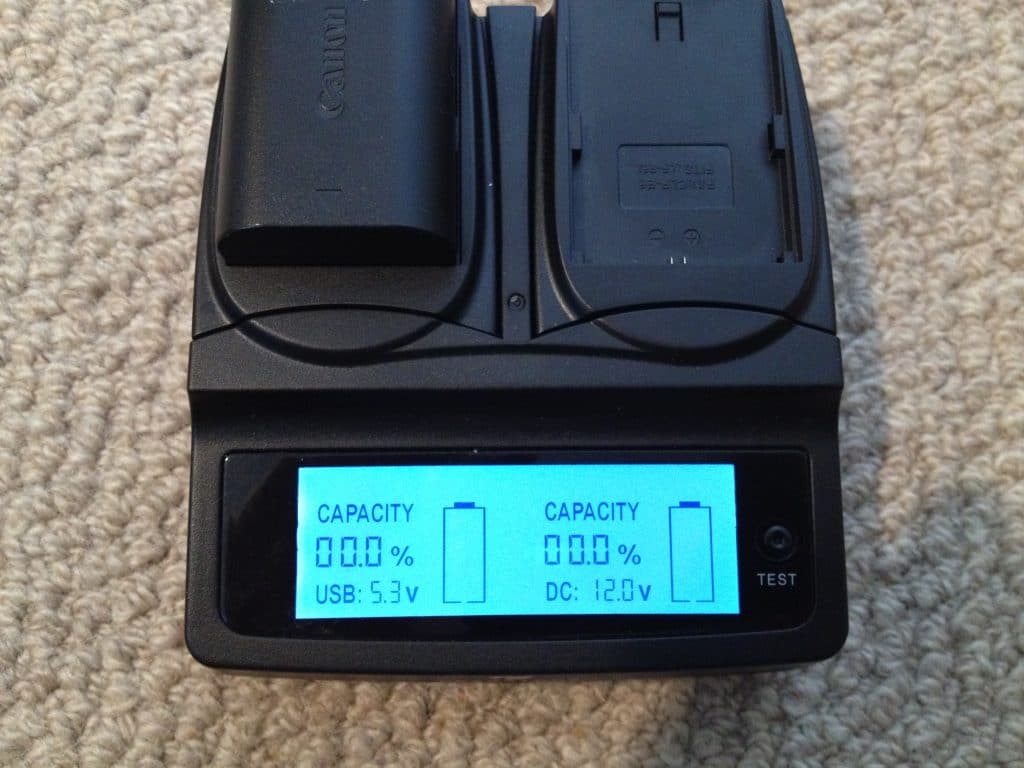 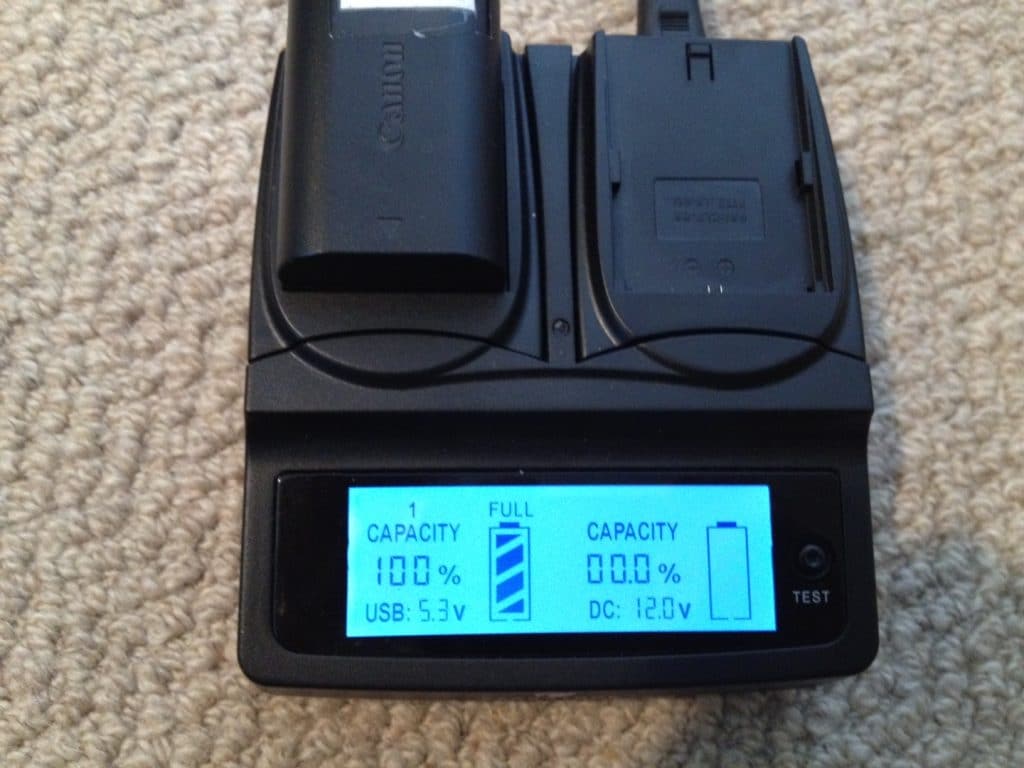 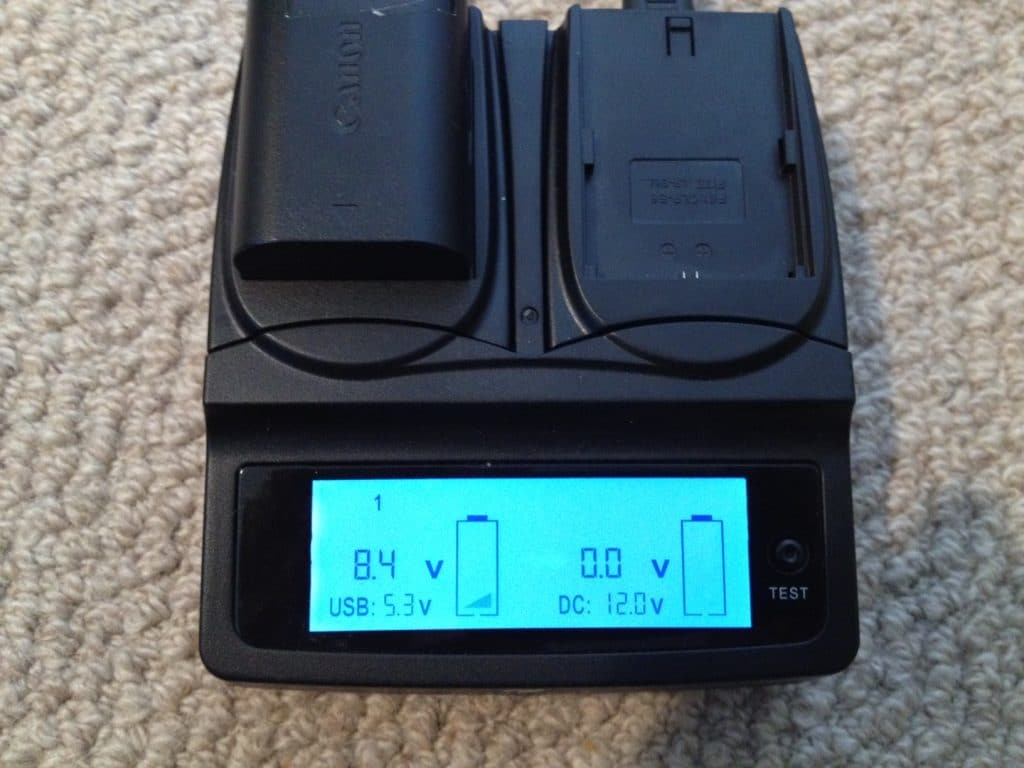 The batteries seemed to charge well enough though but I found it hard to trust the information on the screen when it changes all the time.  For me though, the real deal breaker came when I packed this charger for a photo shoot in Europe.  EVERY manufacturers battery charger that I have ever used is perfectly capable of handling worldwide voltages.  It doesn’t matter if it’s the charger for a $300 point and shoot camera or one for a Nikon D4.  Plug it into any voltage from 110v to 250v anywhere in the world and you will be just fine.

Unfortunately this is NOT the case with the Pearstone Duo Charger.  For some inexplicable reason it will only work with 110v.  So there I was in Austria last week for a shoot, with this charger, and having plugged it into the European 240v outlet of course it did not work.  For me this is a total deal breaker.  I travel with my cameras, that’s what I do.  I don’t want to worry about which charger to take with me for which country, I just want one that works.  Trust me when I say that to find yourself in a rural location in a foreign country with the realization that you cannot charge your camera battery is huge pain in the butt!

If you honestly feel that you will never ever leave N.America with this charger , and you have a huge number of LP-E6 batteries to charge then it does work but quite honestly I’d rather buy two of the official Canon ones for $110 than this one with it’s limited usefulness and inaccurate LCD readout for $80.