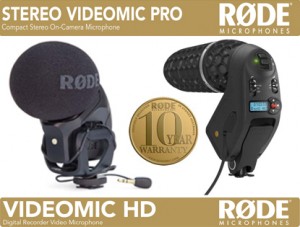 Rode Microphones has just announced details of two new DSLR friendly microphones.  The Stereo Videomic Pro continues their form factor and feature redesign that we saw last year in the Videomic Pro but implements it on the old Stero Videomic.  The second microphone is even more interesting though as it is the first microphone in the world to combine a shotgun mic with a built in recorder and basic mixing capabilities as well as audio monitoring.  Read on for more details…. 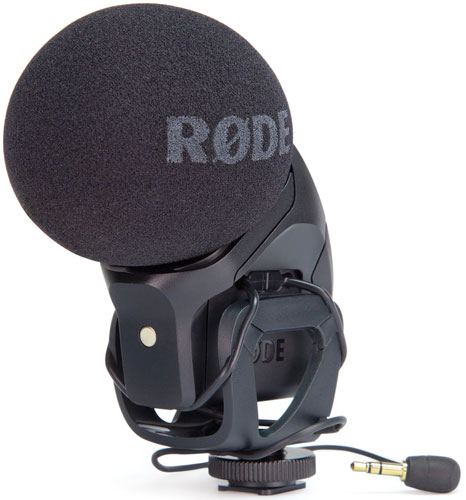 The bulk old Stereo Videomic is gone and replaced with this MUCH smaller version.  Like the Videomic Pro it features a -1odb PAD switch for loud situations like sporting events and live music.  It also has a +20db switch for use with DSLRs.  Sending a hotter signal to a DSLR means that the camera needs to make much less use of their often noisy internal pre-amps and there is also a 75Hz high pass filter switch to help cut down background noises.  The mic is powered by a 9v battery which is certainly not my favorite option.  Most of us have plenty of AA batteries and chargers so it’s a shame it doesn’t make use of that. The microphones themselves are ½”cardioid condenser capsules arranged in an XY pair.  Most people tend to go with a hotshoe mounted shotgun microphone but for ambient noise a stereo mic like this one is much more suitable.  Due to the more complex nature of a pair of mics the price if the Stereo Videomic Pro is a bit more than the shotgun version which are $299 and $229 respectively.  Shipping will begin almost immediately for this new microphone. 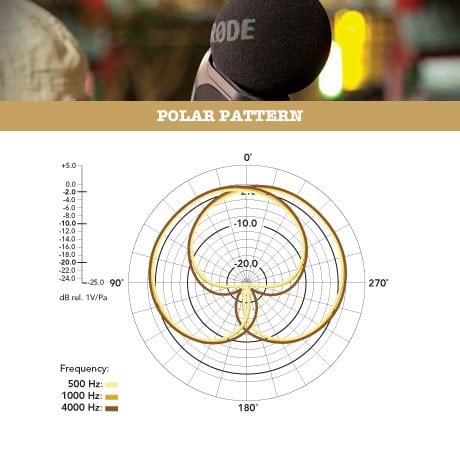 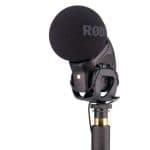 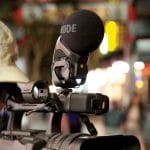 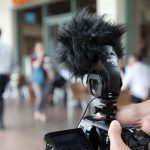 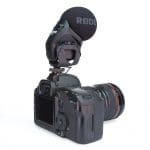 The Videomic HD is scheduled for a little later in the year.  According to Phillip Bloom it is about 6 months away.  The microphone capsule design is supposedly based on the popular NTG-3 shotgun which suggests that this will be a premium product.  It is the very first microphone to feature a built in recorder which records to Micro SD for a higher quality audio track that one which is recorded in camera.  The microphone will also feature a 3.5mm line out to plug into the camera though for those that want to record a ‘scratch’ track for easy synching of the external audio or for those who don’t mind recording in camera and just want to make use of the other features of the Videomic HD.  Those other features are also pretty compelling, the first being the ability to plug headphones into the mic for monitoring, something which you can only do on the Nikon D4 at the moment.  The microphone also features a 3.5mm line in jack which you can plug a second microphone into, a lavalier mic for example.  This line in can be tracked to either the left or right channel of the output to camera , or the onboard recorder allowing you to have basic mixing functions to create 2 separated mono tracks from the two mics.  A further Safety mode sends the regular output on one track and a -20db attenuated signal to the second track. If your recording situation suddenly has an unexpected spike in levels you hopefully won’t clip the sound on the -20db track.  A very nice feature! 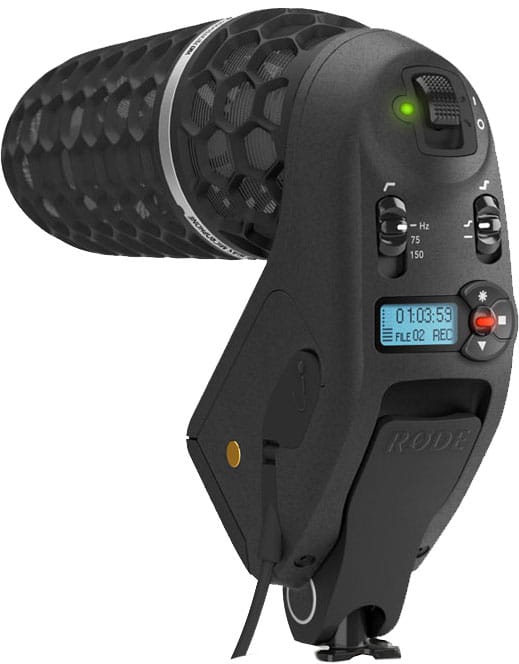 The body of the microphone is manufactured from aluminum and features a built in sound blimp design.  It comes with a dead cat for more blustery outdoor conditions which is also something none of their other microphones come with as standard.  No pricing has been announced yet for this mic, but given the metal body, the NTG-3 capsules and the built in recording capabilities I would be surprised to see this come in at under $600, and not surprised either to see it higher than that.  Given that it would negate the use of an external recorder which would cost a few hundred dollars and feature a seemingly higher quality shotgun than the Videomic Pro which is $229 and feature a built in blimp + dead cat I think we’ll see this higher price but it sounds like it will be worth it. 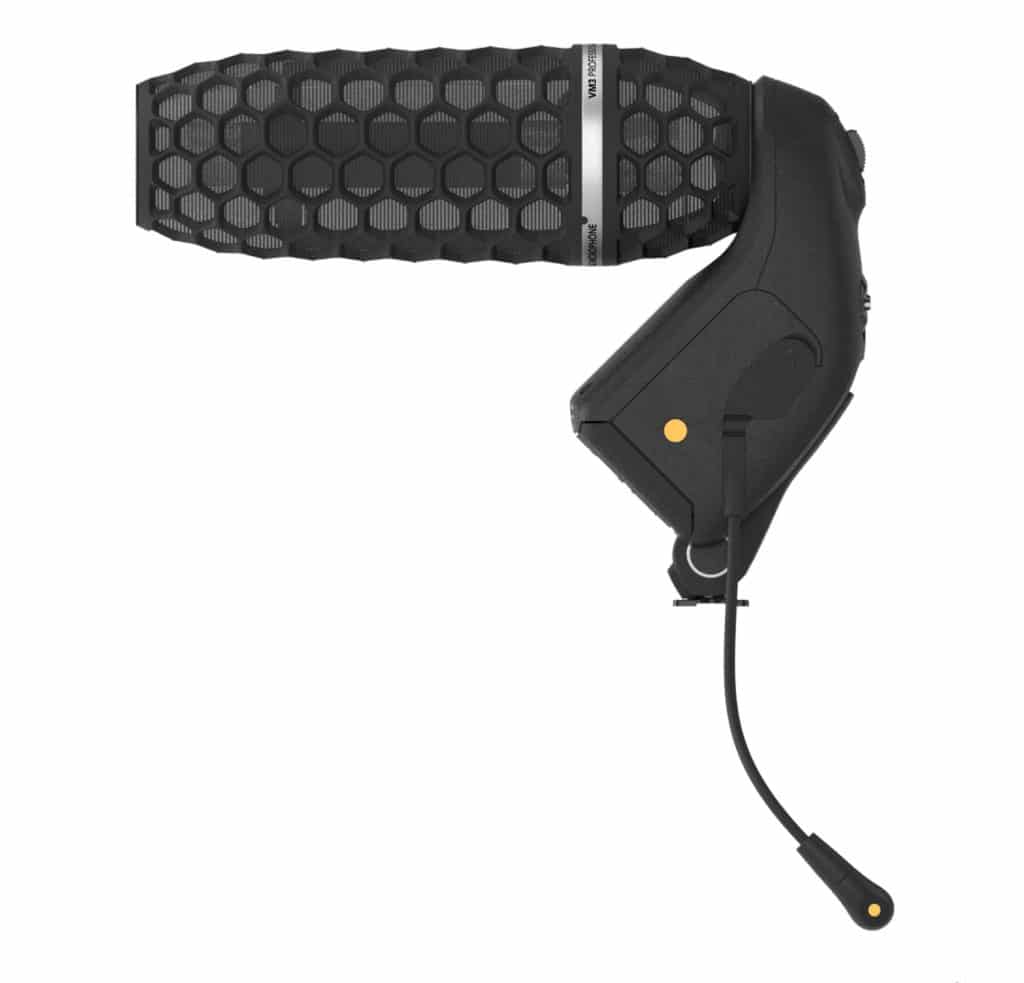 RØDE Microphones is extremely proud to announce the VideoMic HD, a high-fidelity, precision RF bias shotgun microphone with integrated digital recording, designed for use with DSLR and large-sensor video cameras.

The VideoMic HD’s audio DNA is directly inherited from RØDE’s flagship NTG3 professional shotgun microphone. Incorporating the same capsule and sharing much of the electronic design of the NTG3, the VideoMic HD is a true condenser super-cardioid shotgun microphone with RF bias technology. This makes it virtually immune to RF interference and condensation that can cause other condenser microphones to fail.

Continuing its history of innovation and ‘industry-firsts’ RØDE has incorporated a high quality digital recorder into the body of the VideoMic HD. This completely removes the requirement for a separate audio recorder, while still also providing throughput of the audio signal to the camera for a superior reference audio track.

File storage is via microSD card and a microUSB port is supplied for convenient file access and possible firmware updates.

An integrated headphone jack with level control allows users to monitor their recording in real-time, while a high contrast LCD display on the rear of the microphone provides visual metering as well as basic recording control.

Audio capture and output can be configured in a number of ways thanks to the microphone’s innovative output selection.
In its default mode the VideoMic HD’s audio is recorded and outputted as a dual mono signal. When in ‘safety recording’ mode, the microphone captures and outputs the standard audio signal on the right channel and a -20dB attenuated signal on the left channel. In case of unexpected boosts in the audio the user has a safety backup channel of audio that can be referenced. A third output setting allows for dual mono audio capture and a balanced signal output using the optional RØDE VXLR 3.5mm to XLR adaptor.

The VideoMic HD offers a 3.5mm mono line in that supports ‘plug in’ power, allowing for the connection of a secondary microphone such a lavalier or headset. The microphone’s fourth output mode allows the tracking of the line-in to one of the stereo channels, both on the on-board recorder and through the 3.5mm output jack.

The microphone body is constructed from rugged, lightweight die-cast aluminium and features a quick release cam lever for simple and secure mounting in any universally sized camera shoe mount.

Drawing on the design architecture of the award winning RØDE Blimp, the VideoMic HD features a unique windshield and suspension structure. The capsule and line tube are completely suspended inside the microphone, providing superior shock mounting and isolation from physical sound sources through the microphone body, and the outer geodesic structure provides strength while offering superior wind protection to foam windshields. A DeadCat VMHD furry windshield is supplied with the microphone to provide protection in high wind environments.

For more information and to register your interest to be notified when the microphone begins shipping, please visit rodemic.com/vmhd.