Hands On With The Canon G1 X 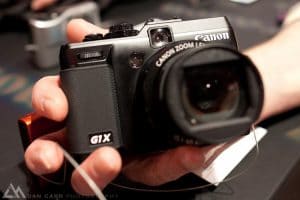 Canon surprised many people with the introduction of this camera last week.  A large (1.5′) sensor camera with a fixed zoom lens is a unique product in the marketplace and I can see it being a popular solution with their target audience being people who already have a pro DSLR.  At CES this week in Las Vegas I was able to get my hands on a G1 X and also to have a quick chat with Canon representative Ben Thomas about the camera.

For full press release info and all the official photos head on over here.  For my first impressions please read on. 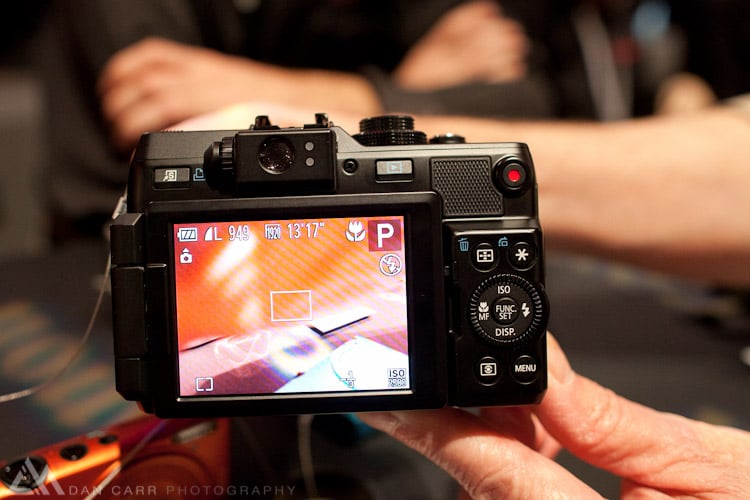 As usual we were not allowed to put memory cards in the camera and take photos so in terms of image quality I can only go by what I saw on the screen.  Of course the first thing I did was crank it up to 20,00 ISO which is the camera’s maximum.  What is clear right away is that you can remove all preconceptions that you’ve ever had about a fixed lens point and shoot camera.  The 1.5″ sensor in the G1 x sets it clearly apart from anything else in terms of high ISO performance.  The difference is literally night and day.  Clearly we can expect to see ISO performance roughly on a par with Canon’s low end DSLRs like the Rebel T3i.

The second thing I wanted to do was see how shallow the depth of field could be with a sensor this size and a lens with an aperture of f2.8 at the wide end and f5.6 at the long end.  The short answer to this is that you probably won’t get too excited by the results in this area.  I was a little surprised how deep the depth of field was, though this stuff is all just complex mathematics it goes to show that a sensor that is 20% smaller than APS-C does make a difference in that area and at full zoom and f5.6 it was barely distinguishable from some P&S cameras in terms of depth (though not in quality). 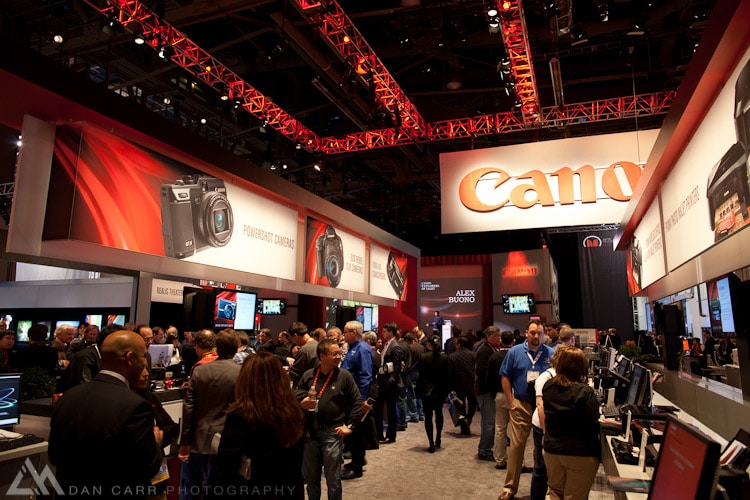 Those of you who are familiar with Canon G-Series or S-Series cameras will be right at home with the menu system , it is essentially no different but there is now no ISO dial on the top of the camera which is a shame.  I personally don’t much like the menu system and a number of times I managed to get the camera seemingly stuck in various modes to which the Canon employees answer was simply to reset to factory default.

Yes I have given this section it’s own title because I feel that strongly about it.  If you have watched the video above , Canon’s Ben Thomas says that the viewfinder is a 100% coverage VF.  It is not, which is fairly obvious as only their pro DSLRs have that feature.  It is actually 77%.  Now hold on a second there, aren’t they saying they are targeting pros with this camera?  What pro do you know that would EVER be happy approximating his framing THAT much ?  I don’t know one that is for sure.  Not only is it  a 77% coverage VF but the image through the VF is utterly distorted around the outside 30% and has NO information displayed in in whatsoever.  This comes in the days where Fuji is making hybrid viewfinders which show you everything and the kitchen sink, and Sony are making EVFs that are such high resolution they are almost indistinguishable from an optical viewfinder.

So why bother with the waste of space VF ?  Get rid of it and make the camera smaller, then allow an optional EVF add on.  My current compact ‘other’ camera is a Fuji X100 and I love the viewfinder.  For this simple reason alone I will never own a Canon G1 X.  I need a viewfinder, it makes me feel connected with the camera and what I’m doing.  There is of course a time and a place for using the LCD screen but it not all the time and all the places. I need a useable viewfinder and the G1 X does not have one that comes even remotely close.  End rant.

Ok so what else did I discover ?  Well the camera will sell for $799, a pretty chunk of change, yet the ring around the lens on the front of the camera was loose on all that I tried.  It felt poorly constructed in that area.  Everywhere else was pretty solid and the LCD was great but I wouldn’t say overall build was anything above average.  I also had issues with the shutter button which was so sensitive that I often took a photo before the camera had locked it’s focus. The focus speed was also distinctly average compared to the Panasonic G-Series cameras like the GX1.

Will this be a good seller though ?  Yes I think it will be but only because there is nothing else like it on the market.  Personally I would be much happier spending a little more and getting a Panasonic G1 X though which has far faster AF and an option EVF, and then just leaving one X-Series lens on it.  Or if you really wanted a fixed lens just saving $200 and going with the fabulous little Fuji X10 which feels much nice in the hand and is smaller.