Ok the dust is settling now on the launch of Canon’s amazing new 1D X camera.  But in the melee of information flying around out there I have picked out 10 interesting and amazing features you might have missed.  If you didn’t catch the full launch preview make sure to check that out right HERE 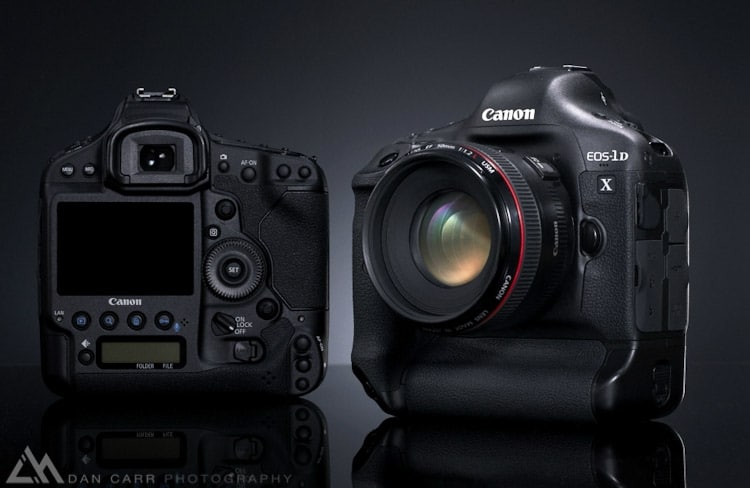 The quick control dial on the back of the camera has a capacitive touch system built into it called Silent Control function.  That means you do not actually need to rotate the dial on the back if you don’t want to, you can simply move your thumb over and around it.  This means that video shooters can silently adjust in camera settings like audio , while the video is being recorded.

All previous Canon 1-Series cameras have had one CF card slot and 1 SD slot.  This time Canon has FINALLY switched to dual CF slots just like Nikon.  Not many people use both slots as it means carrying two types of cards around.  Now it will only be CF cards!

The audio levels can be monitored with level meters on the screen during filming, they can then be altered using the above mentioned silent control function.

You can see 4 new buttons on the front of the camera in the photo below.  These four buttons are completely user assignable.  That’s right, give them whatever function you’d find most useful. 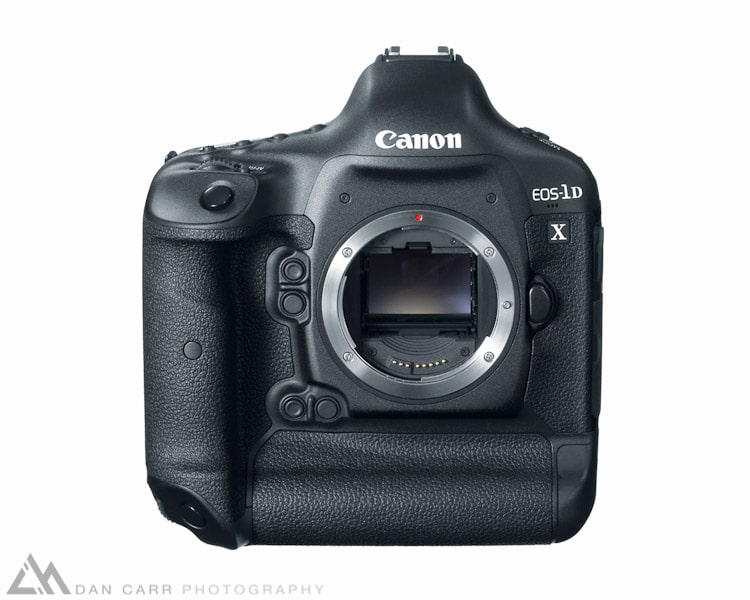 For the first time Canon has given the camera a third processor just to handle the camera’s complex light metering.  In fact it’s a DIGIC IV processor from the previous Canon 1dMKIV.  The dual DIGIC 5+ processors are therefore left to handle AF and image processing.

The camera can shoot RAW at 12 FPS but enabling a special high speed shooting mode can squeeze 14 fps out of the camera in JPEG mode.  The camera achieves this by locking the mirror in the up position so it doesn’t have to waste time flipping the mirror up and down between shots !

Now film makers can shoot long interviews and documentary takes because the camera will create another file instantly when the 4GB file size limit is reached.  The 4GB is a limitation of the Compact Flash file system.

The new cleaning system used dual vibration mechanisms to offer even better sensor cleaning.  From the Canon site “The EOS-1D X makes use of a carrier wave vibration that rolls dust particles down the filters – the advantage is that instead of the risk of scattering dust particles around, they are transported to the capture surface under control, and smaller dust particles can be removed more easily. ”

Similar to the settings for the Canon 7 D in the camera – Automatic, Single Point AF, Single Point Spot AF (available with all lenses), Zone AF, and two AF point expansion settings. This means that you can set a point, and all the surrounding points.  This was a feature I really liked on the 7d. 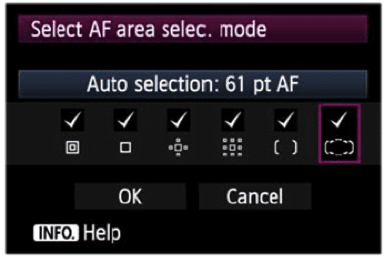 Hidden away in the specs is another neat feature allowing you to ‘stack’ multiple images together in camera into one final image.  There are four modes within this, Additive, Average, (Comparative) Bright and (Comparative) Dark.

The Additive exposure control is for those used to shooting multiple exposures with film cameras. Instead of taking each image with the correct exposure, the total exposure is added up from each individual image. To achieve the correct result, you should underexpose each image so that the resulting image is correctly exposed once they are all combined together. The Average setting provides an automatic exposure control whereby each image is automatically underexposed so that the final image is then correctly exposed. Unlike with the Additive setting, all images in the multiple exposure will be averaged and taken at the same exposure level setting. Comparative Bright is suited to photographing uniformly dark scenes with bright objects superimposed on top. A classic example would be a moon superimposed on a dark night sky — achieving this is done by only overlaying the bright objects within the scene. Conversely, (Comparative) Dark is used to eliminate the bright areas of images and so only overlay the dark areas of each image. This setting is useful for eliminating reflections and bright patches in an image — like the reflections you may see when photographing a portrait of someone wearing glasses.

Ok so I found a couple more things I want to add ! 🙂

A new 2500ma battery and a new charger.  The batteries are compatible with old cameras though and your old batteries will also with in the 1D X !  You’ll have to use the new charger though as that’s the only one to work with the LPE4N battery.

This feature was first seen in the Canon 7D.  It allows digital information such as grid lines and levels to be displayed within the viewfinder.  I loved this on the 7D so I’m pleased to see it make it to the big time now!