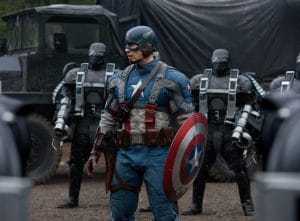 I just received this press release from Canon and I thought it was pretty interesting.  It seems that we can now add Captain America : The First Avenger, to the list of Hollywood feature films to use the Canon 5dMKII in their production.  The small size of the camera makes it ideal for POV shots and sequences like car chases.  The 5dMKII is a few years old now but it seems that nobody has eclipsed it’s video performance yet.  Full info after the break.

“The challenge with a lot of action photography is getting the camera in the right position,” Taylor noted. “I’m always looking to get the camera into impossible to reach places because those kinds of shots make action sequences much more exciting. Most 35mm motion-picture cameras and even the leading digital cinematography cameras are just too big to get into interesting positions.”

Action scenes in “Captain America: The First Avenger” in which Taylor used 5D Mark II cameras for POV shots include a car chase and crash, and a high-speed motorcycle pursuit. The small size of the camera enabled Taylor to mount it on the interiors and exteriors of moving vehicles to capture dramatic action shots. The camera’s size also ensured that it was “invisible” to the film cameras shooting the same scene from a distance.

“The thing with action is that the more angles you can shoot, the faster the cuts you can use, and the more energy you get into a sequence,” Taylor added.