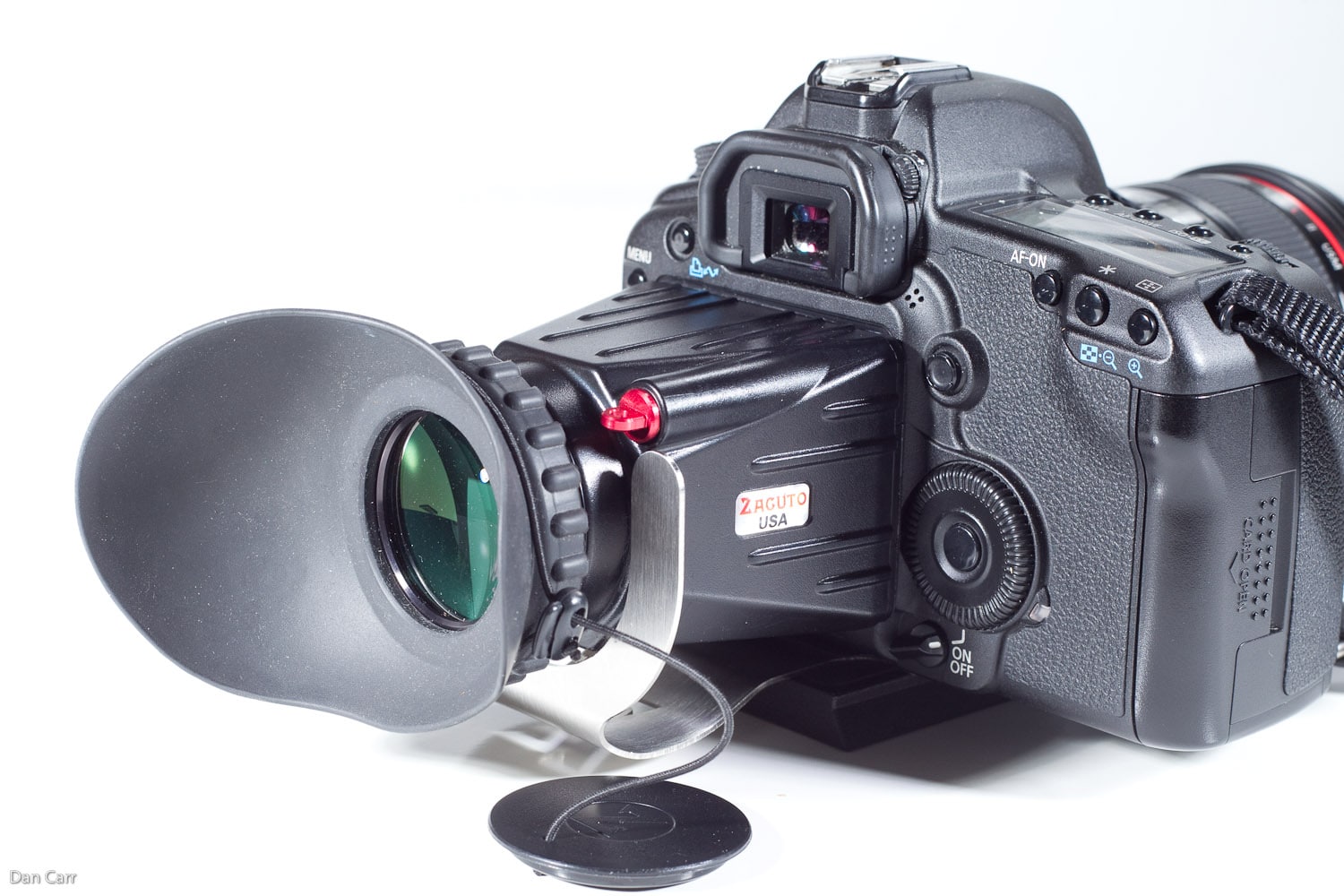 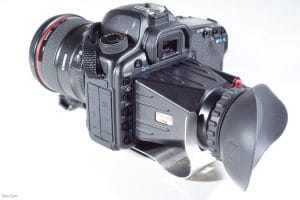 If you have taken more than a passing interest into the video capabilities of your DSLR camera then you will probably have thought about getting some sort of viewfinder for the LCD screen. With the DSLR cameras lacking the ergonomics of traditional video camera design, such viewfinders are probably the most useful accessory to aid video shooting. Not only do they permit easier manual focusing with a clear view of the screen, but they also add stability to hand held shooting with an extra point of contact to your body.

In fact with a well shaped rubber eyepiece they add more stability than you might imagine at first, as long as you can press it it comfortably against your face. The original Z-Finder was one of the first that became available after Canon launched the 5dMKII. Zacuto was already a well respected manufacturer of high-end cine accessories and these two facts combined to turn the original z-finder into one of the first ubiquitous 5d accessories. Since its first launch the Z-Finder has gone through a couple of variations and with the most recent one, Zacuto has split the line in two offering the Z-Finder Jr and the Z-Finder Pro. The Jr carries a recommended price tag of $265 and the Pro a slightly loftier one of $395. It should be noted that these are the prices charged by Zacuto’s own online store, but B&H photo does offer a good discount on those prices. 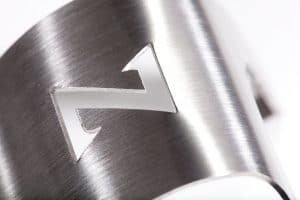 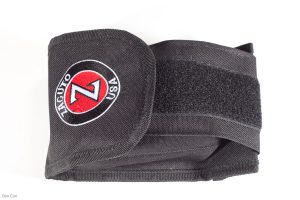 For the higher price, the Pro comes equipped with Zacuto’s new Gorilla plate,adjustable diopter for people who wear glasses and also an anti-fog coating on the lens. The question is though, does the Jr version omit luxuries or necessities ? If you wear glasses then there is a set of extender frames available that move the finder further away from the screen to suit your vision, but the other two main feature differentials needed a little more testing. The Gorilla plate of the Pro is a baseplate that mounts permanently to the bottom of your camera. The Z-Finder is then attached to a low profile quick release plate that slots onto the baseplate when the viewfinder is needed. Previous versions of the Z-Finder mounted directly to the camera via a semi-permanently attached plastic frame that was stuck onto the camera. Many people were not so happy with sticking things to their camera so these new versions forgo that particular mounting method, although they are still backwards compatible with it should you prefer it. 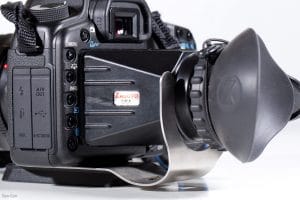 The metal mounting bracket for the Z-Fidner Jr is attached by sandwiching it between a tripod plate and the base of your camera and is frankly a bizarre choice of design. Ideally you want to be able to quickly remove the Z-finder should you wish to switch to shooting stills, or for reviewing video footage on the LCD screen with several people. Whilst you can extract the Z-Finder itself in a relatively quick fashion, it leaves the mounting bracket in place making it impossible to raise the camera to your eye to shoot a photo, and similarly obstructing a view of the LCD screen. I also found the bracket cumbersome to transport due to the sharp metal edged design. Stowing it with the Z-finder in the provided case resulted in many marks on the scratch-prone z-finder body so careful storage elsewhere in my camera bag was needed to prevent damage to other equipment as well. After only a couple of uses, the rubber grip on the bracket started to peel off and the the whole thing needed regular re-bending to keep it in shape. In fact it even arrived in the box bent well out of shape.

The shape of the bracket also had me somewhat puzzled in the way that the U-shaped grip to hold just behind the eyepiece, barely had anything to purchase on. The width of that part of the bracket looked as if it was designed to hold something far wider, with rubber extending right to the edge. But as you can see from the two photos below, the majority of this area goes untouched and the Z-Finder is pressed up against your camera with contact from only the smallest area. And don’t get any ideas about attaching this to your 1dmkIV or your D3s either. Unlike the Pro version there is no adapter for “tall” DSLRs. Perhaps it’s because my background is in engineering and design, but I just couldn’t find anything good to say about this bracket and mounting method. 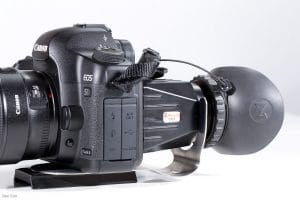 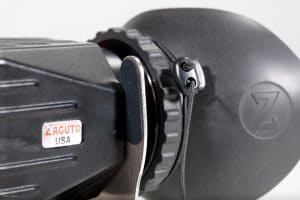 So now you have the Z-Finder attached and you excitedly pop the handy eyepiece cover off and bring it up to your eye to create your cinematic masterpiece. WOW this looks great! You can finally focus with your f1.4 aperture lens wide open, everything is so clear untill………WHITEOUT. Suddenly everything through the viewfinder takes on a hazy, dreamy look and fog rolls across the lens. By the way, in case you hadn’t figured it out this is exactly how it played out when I put the Z-Finder on my camera. Hmm I thought to myself, that’s odd, maybe my camera was cold ? I put everything aside for half an hour thinking that something was either hot or cold and things needed to even themselves out. Returning to complete my cinematic masterpiece a little later I found the same thing happened about 30-45 seconds after raising it to my eye. This is crazy I thought, surely it can’t only be designed for shooting things less than 30 seconds long! I did some checking up on the internet among the forums and even Zacuto’s own website. It seemed that the fogging issue was well documented in the previous version of the Z-Finder. Zacuto states that it can happen when moving between extreme environments but I was just sitting at my desk in my office, hardly extreme. So I went outside and tried it again on several occasions with the same outcome. To this day I have not been able to shoot a shot with it longer than 1 minute in length without it fogging up. AHA Zacuto says! But we sell anti-fogging wipes in our store to prevent this! Oh you do do you?! How about throwing in a lifetimes supply of those when people buy the Z-Finder then ? Well if you don’t want to buy the wipes, you can always buy the Z-Finder Pro for $150 more which has a permanent anti-fog coating on it! Wow.

The big problem I have with this is that the fogging problem was well documented with the previous version of the Z-Finder. Somewhere in the development of these new Z-Finders, somebody would have had to have made the call that they would not address this issue with the lower priced Jr version and therefore they were deliberately putting out a product that they knew would perform to a below-par standard. Where par is simply being able to use the product for what it is designed for. And it’s not as though its a cheap product at $265 for a few bits of plastic and rubber. I expected more from a company as distinguished as Zacuto. I have seen several people rave about how good the anti-fogging coating is on the Z-Finder Pro, and I thought at the time that they were getting awfully excited by a chemical coating on some glass. But now I understand it! They were just overjoyed that it worked better than the previous version they owned. So why not put the coating on the Jr version then ? Did they really need that extra point of differentiation between the Jr and the Pro ? I think not. The Gorilla plate mounting system and the diopter would have been just fine for separating the two. Sure it might have added a couple of dollars to the production cost, but for something that works right out of the box I think it would have been well worth it. 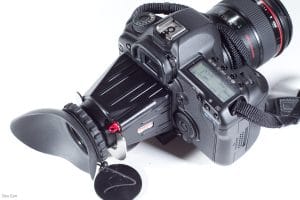 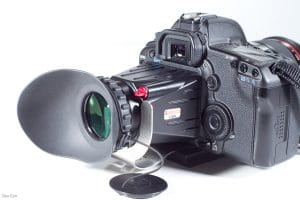 In the interest of a fair and balanced review though, when I could see the LCD through the eyepiece it was a clear image and critical focusing was much much easier. The image I could see was much clearer than through my other viewfinder, the Hoodman Hoodloupe 3.0 which tends to have softer edges around the image. The Z-Finder Jr features a 2.5x magnification lens after the 3x was deemed a little too much in the previous version. Though there is both a 2.5x AND 3x version of the Z-Finder Pro , I think the 2.5x is right on the money in terms of seeing everything without having to look around inside the viewfinder. Whilst I don’t own a 3x one, I have tried it and you do have to physically look left and right to scan the whole frame as it seems much bigger. This might help you a little with focusing accuracy, but personally I thought the 2.5x to be perfect.comparison. The large rubber eyepiece is also a good shape for blocking the light and, as I mentioned at the top of the review, comfortable enough to brace on yourself for added stability. 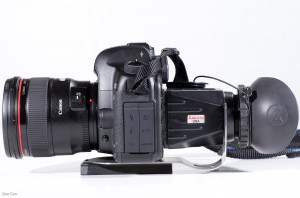 I was super excited to try this product out initially, but left with some pretty mixed feelings at the end of it. Every deficiency that I have talked about seems to have been solved with the Z-Finder Pro. Anti-fog coating and a quick release system that enables you to quickly change to either a stills photo setup or to simply see the LCD screen clearly without obstruction. The Gorilla plate of the Pro can also be left on the camera all the time if you use the Z-Finder a lot, whereas the mounting bracket of the Jr is just frustrating right out of the box. There is no way that I would recommend the Z-Finder Jr to someone unless they were on a very very strict budget and didn’t mind judicious usage of anti-fog wipes. Even then I would tell them to toss the mounting bracket in the junk and just go back to using the stick on method from the original Z-Finders. For a $265 product though I was hoping for a lot more, especially from a company that has a reputation for making high-end cine accessories. My overall judgment on Zacuto gear will have to wait a bit longer until I have sampled some more of their products. Lots of people rave about their gear but in this particular product all I can see is shortcuts and poor engineering. What is even more frustrating though is that they knew about the fogging issue and decided to only implement a fix in the higher-priced product. Even before you realize that you can’t see through the fog though, you definitely don’t have that feeling that you have a good value product in your hand. At the lower price point it still feels overpriced, so to recommend the Pro at $150 more, is something I can only do to those who really don’t worry about the cost of such things. I think the Z-Finder Pro will solve all these problems but personally my disappointment in this product is going to have me looking elsewhere for an LCD viewing solution for the moment.