Apple iPad for photographers. What use is it? 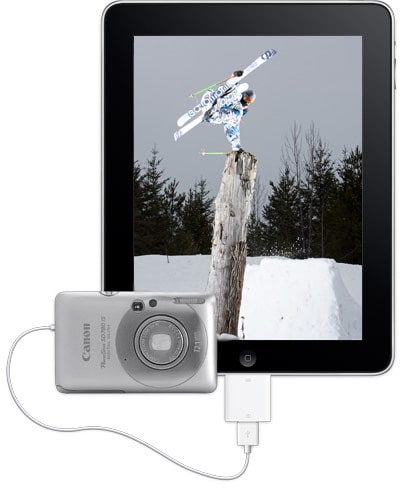 A few days ago Apple announced that it has sold 1 million iPads in the device’s first month on sale. Less than half the time it took the original iPhone to achieve the same feat. Lots of photographers like a good gadget and many are users of other apple products already, but is there actually any practical use for one?

It seems as if the iPad might be the catalyst for a fundamental change in the way that we receive what was previously “printed” media. The iBook store has sold 1.5 million books along with that first 1 million iPads and many of the largest magazine publishing companies have released iPad versions of their monthly magazines. So far most of them have failed to really optimize these digital magazines and really take advantage of the possibilities, but i’m sure that it will come with time. Many people were waiting to see how things took off before committing budgets to their development. But what use can an iPad be to a working photographer right now? 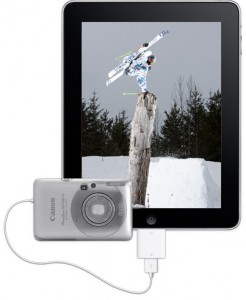 It came as something of a surprise to me that the iPad was compatible with the same RAW files as Mac OSX snow leopard. So that means that viewing your RAW files is no problem at all. In fact, navigating them turns out to be quite speedy. The website Leica Rumors posted a video on Youtube showing a collection of Leica DNG files from a Leica M9 being manipulated on the iPad and it really seemed to do a great job of it. To get your photos onto the iPad though you are going to need the optional Camera Connection Kit, available from Apple for $29.99. The kit contains 2 “dongles” that fit the dock connection in the bottom of the iPad. One is an SD card reader and one is a female USB port that allows you to connect your camera directly to the iPad. Using either of these brings up an import screen that allows you to select which photos to import and they are then added to your iPhoto collection.

The problem of course is the iPad’s limited storage capacity. You cannot use the USB port to add storage via an external USB drive or anything of that nature so you are stuck with with at most 64GB of storage space ( and that is assuming you have added no apps, music or videos). This might be enough for backing up photos from a family vacation but it’s unlikely to do the trick for most pro photographers out there  The other problem with using an iPad for this purpose is that you have no way of duplicating the photos onto another drive. Something that is an absolute necessity if you are to maintain fully redundant data backups. One option would be to travel with a device such as my previously reviewed Hyperdrive Colorspace UDMA. This would take care of your second backup for you and negate the need to bring a laptop. At most I can see myself using this combination for a weekend break somewhere as long as shooting photos was a secondary goal.

iPad as a portfolio 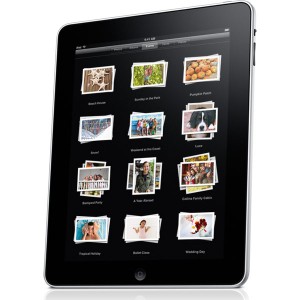 There’s no denying that the 1024×767 pixel screen of the iPad is beautiful. Photos displayed on the screen look vibrant and clear. Combined with the smooth operation of photo viewing software it makes for an interesting and impressive way to show photos to prospective clients. I can definitely see people carrying these around at trade shows but I still think that traditional photo buyers at editorial and advertising agencies are still going to need that printed alternative that you can easily hold on to. The usefulness of the iPad for showing your work is going to depend on what sector you work in. For people like wedding photographers having a first meeting with a potential client it could really make a stand-out difference. For high-end weddings it could even be used as a content delivery method. All your photos presented on the iPad which the bride and groom can carry around with them to show all their friends. The ability to pass the iPad from person to person so easily is what can really make it stand out in this instance over something like a regular computer. It FEELS like passing a photo album around but it looks so much better than that, and I haven’t passed a photo album around in a long long time.

iPad for reviewing shots during shooting

Before the iPad was officially announced, I think this is what most photographers dreamed of being able to use it for. If you could tether your camera to the iPad and instantly review your images it could be a very useful device. Unfortunately Apple’s decision to not include a USB port on the iPad has made this a bit of a problem. The camera connection kit does allow you to connect a camera but only to download shots, not control things while tethered like you can with standard tethering programs on a regular computer. You could review your shots with the connection kit but it would slow your work down to the point where it’s really not worth it. There is one more solution that I have stumbled upon though…………

Shuttersnitch is an iPad app available from the app store HERE  Designed specifically for the iPad, it enables direct FTP transfer of JPEGS from any FTP enabled device, to the iPad. This includes the Eye-Fi wireless SD card , or any wireless enabled cameras such as a Canon 1dMKIV with the WFT-E2 II. With the Eye-Fi you could put the SD card in the second memory card slot of a Canon 1dMKIV and tell the camera to write RAW+ small sized JPEG files. You can select it to write the JPEGS only to the SD card and then configure it so that ShutterSnitch displays the JPEGS as they arrive via FTP from the Eye-Fi. It will automatically display the JPEG on screen, along with basic EXIF information. It’s also possible to transmit RAW photos and video via ShutterSnitch, but at this time it cannot display them.  Everything also works on an iPhone too! I haven’t had a chance to try out the program with an Eye-FI yet so no comments on the speed, but shooting small JPEGS it should be pretty fast. If anyone tries it out please leave a comment below!  If this works as I imagine it could , its actually better then direct tethering as there are no wires!  You could have an art director several feet away monitoring the shots coming wirelessly out of your camera! 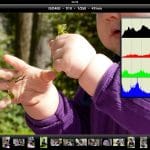 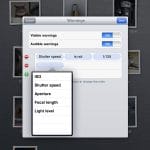 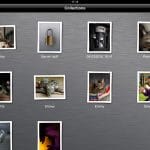 There are hundreds and hundreds of image editing applications available on the iPhone and all of these will also work on the iPad. But none of the apps are designed with professional photographers in mind and so far, none of them allow you to edit RAW files. Personally I can’t see any reason why you would ever want to edit photos on such a small screen anyway so I dont really see this as a problem. If you need fast image delivery for content sharing websites and social media like twitter and Flickr then you might want to make a couple of fast adjustments but nothing too major. One interesting piece of info though is that an Adobe product designer named Terry White posted some information on his blog which all but admits that Adobe is working on a version of Lightroom to be used on the iPad! So watch this space I guess…. it would be fun to be able to adjust RAW images though I don’t know how I would ever integrate that into my workflow. But this is just the beginning, I suspect there are many uses of such a device that we have yet to think of.

This is worth a quick mention, there are a few photographers out there making a bit of extra money on the side of their business by selling wallpapers for the iPad. Trey over at stuckincustoms.com has a beautiful set of HDR images available for purchase, pre-formatted at iPad screen size. Other photographers have gone even further and enlisted programmers to create apps available in the app store that give you a selection of wallpapers. Trey has reported very very good sales from his site. I would also expect to see a slew of photography related books appearing in the iBook store before too long. The high resolution screen would lend itself very well to displaying books like this.