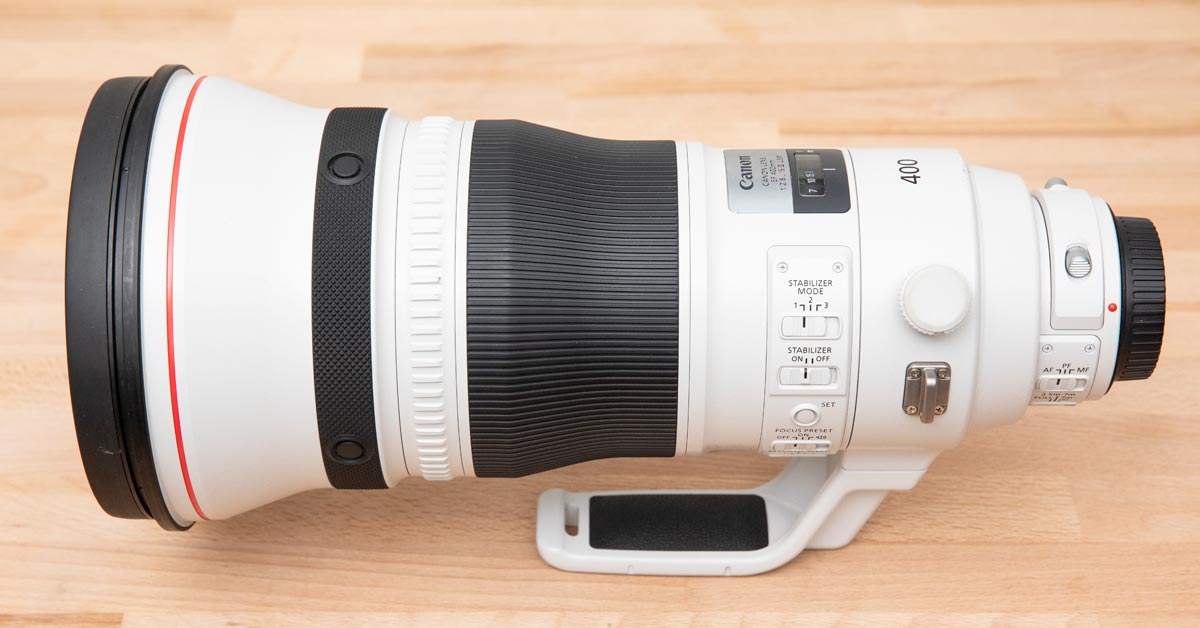 Having spent some time with this lens now, I thought I’d offer up some initial thoughts on what can certainly be thought of as the flagship lens in the Canon EF L-Series lineup.

This lens is not a whole lot heavier than the lightweight EF 400mm f/4 DO IS II, which is a remarkable achievement. Most of the weight savings came from a total optical overhaul which have now positioned the majority of the glass elements closer to the lens mount. With the lens barrel being that much thinner at that end of the lens, these glass elements are considerably smaller than they were when they were closer to the front in previous versions of the lens.

Not only is it lighter, but with the weight concentrated at the lens mount end of the barrel, the whole thing feels much more stable and comfortable to handhold. Yes, you can easily handhold this lens for long periods of time! In fact, despite it being a touch heavier than the 400mm DO II, I actually preferred the balance of the setup, and found it just as easy to hold for long periods. I can’t underline enough how much of a game changer this weight redistribution is! I was staggered.

The next thing that leapt out at me was the improvement of the image stabilization. On paper it’s only a one stop improvement, to 5-stops, from previous Canon super telephoto lenses, but in practice it just seemed to work much better for me. In part this might also be a knock on effect from improved weight distribution of the lens, but whatever the reason is, the result is a that I was happily nailing shots handheld at 1/50 of a second and below. It gave me real confidence using the lens unsupported.

In terms of overall image quality, it’s a given that this is as good as it gets. It’s as sharp wide open at f/2.8 as it is stopped down to any aperture. It really doesn’t get any better, although you should expect some noticeable vignetting at the widest aperture. No real surprises here, but it’s nice to know that even with a total optical overhaul, the lens designers have kept the staggering performance of the previous version, and potentially improved on it if you are really pixel peeping.

I have always loved the 400mm focal length for wildlife photography because it allows you to get a variety of different compositions when you use a 1.4x and 2x extender. With this lens you get a 400mm f/2.8, a 560mm f/4 and an 800mm f/5.6. I have used these combinations to great effect with the smaller 400mm f/4 DO IS II so I was curious to see how things would perform with the new 2.8 III.

Before getting this lens in my hands, I already knew of two professionals who sold their 600mm f/4 II lenses to switch to the new 400mm f/2.8 III based purely on its performance with extenders, and the focal range flexibility that gives you. 560mm f/4 is not hugely different to 600mm f/4 after all. And it gives you that option of using an f/2.8 aperture to gather more light if you need it.

Remember, a one stop difference in light with all other things being equal, will give you double the shutter speed! That can easily be the difference between a sharp shot and a blurry mess when you’re working with skittish wildlife in low light, or at a sporting event under fluorescent or LED lighting.

So how did the extenders perform?

With the 1.4x extender I got pretty much the results I was expecting, it’s incredibly sharp and autofocus is lightning fast under tough conditions. But as I said, I was expecting this because I have already been accustomed to sharp images from the 400mm DO IS II with the 1.4x extender. The 400mm f/2.8 III was just as sharp, and the autofocus was definitely faster to lock on, and more accurate (less front or back focussed shots).

What really surprised me was the autofocus speed with the 2x extender. On the 400mm f/4 DO IS II I could get sharp shots with the 2x extender in place, but I would never trust it with anything that needed to be tracked using AI servo focusing. It just didn’t cut it. With the 2x on the 400mm f/2.8 L IS III though, it’s a different story. Focus is much faster than I have ever seen with any other Canon lens when using the 2x. Not just fast, but deadly accurate, too. And that’s important with an 800mm focal length because wide open, you have a razor thin plane of focus.

The only thing I did notice here was that it does benefit from being stopped down 1/3 of a stop to f/6.3. Shots are very sharp at f/5.6, and totally acceptable, but there is an improvement to be seen by stopping down. Honestly, clients would never notice it, but it’s there if you peep really closely.

You might be thinking I’m going to list the price as a bad point, but actually I’m not. I think the price of Canon’s super telephoto lenses is justified, and they hold their value well on the second-hand market. For example, I recently wrote about how a $12,000 lens only ended up costing me $400 after buying it new and using it for many years. So yeah, the 400mm f/2.8 L IS III is expensive at $12,000, but it’s worth it.

The only real negative I can come up with is the wide-open vignetting, and to be honest I’m clutching at straws here. I never even felt it needed to be corrected in any of these sample images on this page, so that shows you how little of a concern this really is. But I had to try and come up with something…

If you have the Mark II version of this lens you might be asking yourself if it’s worth upgrading to the III. Personally I think it probably is, if you are using this lens to make income for your business. The weight saving makes it easier to use, easier to travel with and easier to get sharp shots in low light. I know for a fact that I got some shots of these foxes that I would not have got with the Mark II version.

With the Mark II I would have felt it necessary to use a tripod, whereas with the Mark III I was happy to lie on the ground under a camouflage cover for several hours with no lens support. When the foxes and their kits were running all around me I could quickly change my angle and position in a way that simply would not have been possible had the lens been on a tripod. With this lens I could react as fast as I wanted to, and it put the biggest smile on my face!

The weight saving will also likely mean that you are inclined to take the lens with you more than you would with heavier, older versions. Right there, that reason means you’ll get more for your money. No point having an expensive lens in your close that doesn’t get used at every opportunity.

And lastly, I have to say that the AF speed improvement with the 2x extender is a real bonus. The 1.4x extenders have always worked well, but the 2x extender on this lens makes a fabulous hand-holdable 800mm f/5.6 lens. It’s worth noting, though, that this lens is only compatible with the Mark III Canon extenders.