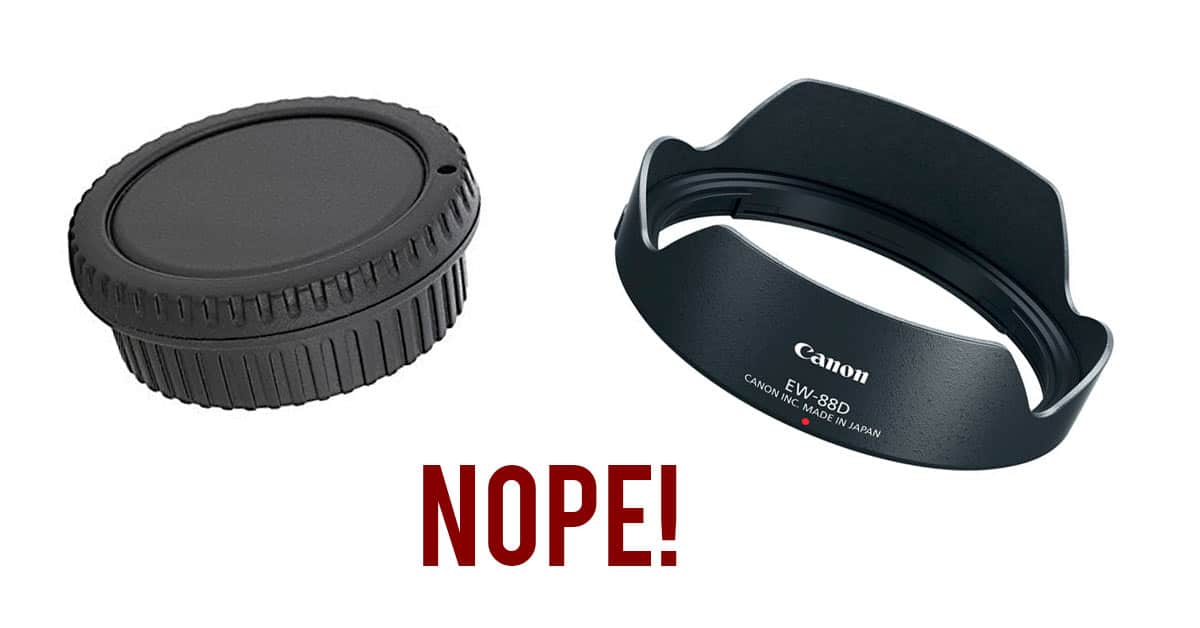 As I’ve also mentioned in that starter post, I found it  easier to imagine weight savings as fractions of my camera gear, because ultimately what I was trying to do was free myself up to carry more gear if I wanted to. You should choose measurements that make sense to you, but for reference, these are numbers I was keeping in mind to help me visualize my progress:

You Probably Don’t Need Them Anyway…

Lens hoods are designed to help prevent lens flare when the sun happens to be at just the wrong angle in your composition. A few degrees fore or aft of that very specific position though, and the lens hood is doing next to nothing. And you know what else can be a lens hood? Your hand. I rarely use lens hoods anyway for landscape photography because I often have a filter holder on the front, or at least a circular polarizer which is hard, and sometimes impossible to adjust with a hood in place. A lens hood can offer come protection from scratches on the lens when you’re working in a crowded or tight environment, but that hardly describes the backcountry. Not only will you save some weight by ditching the lens hood, but you’ll also save some volume because those things can be a pain in the ass when it comes to packing lenses into a tight space.

I weighed the lens hoods from the two lenses I will most likely carry on a backpacking mission:

Now this might seem like a pitiful amount, but really, what’s the point of carrying anything unnecessary when you’re backpacking?  If you saw an extra, spare sock in your bag you wouldn’t carry it with you just fun now would you? Of course you’d take it out and leave it at home. You’ll notice that this is actually pretty close to the weight of a spare battery for my 5D Mark IV, so that might help to put things into perspective. If you’ve been fretting about carrying additional batteries, ditch your lens hoods and take that extra battery instead so that you’ve got plenty of power for some nighttime star trails!

In most cases I’ve also been known to carry around a body cap for my camera, and the rear cap for the lens that’s mounted to the camera. If you plan on having a lens attached to the camera at all times, which seems likely when backpacking, then these two caps can also be left at home. This saves an additional 28g if you’re a Canon user, and likely a very similar amount for other brands. Now we’ve gone and saved a total of 90g by ditching a bunch of useless plastic things that would serve us little purpose. That’s more than the weight of a spare camera battery, and about 1/7 the weight of a 16-35 lens.

Remember that in the previous post, I also saved 140g just by changing the kind of rain cover I was using on my backpack, so with just a couple of small changes we’re creeping up on a quarter of a kilo in savings, which isn’t far off half my original 600g target specified in the starting post. I have a feeling I’m going to be smashing that original target…