Behind the Shot: Grizzly on the Rocks 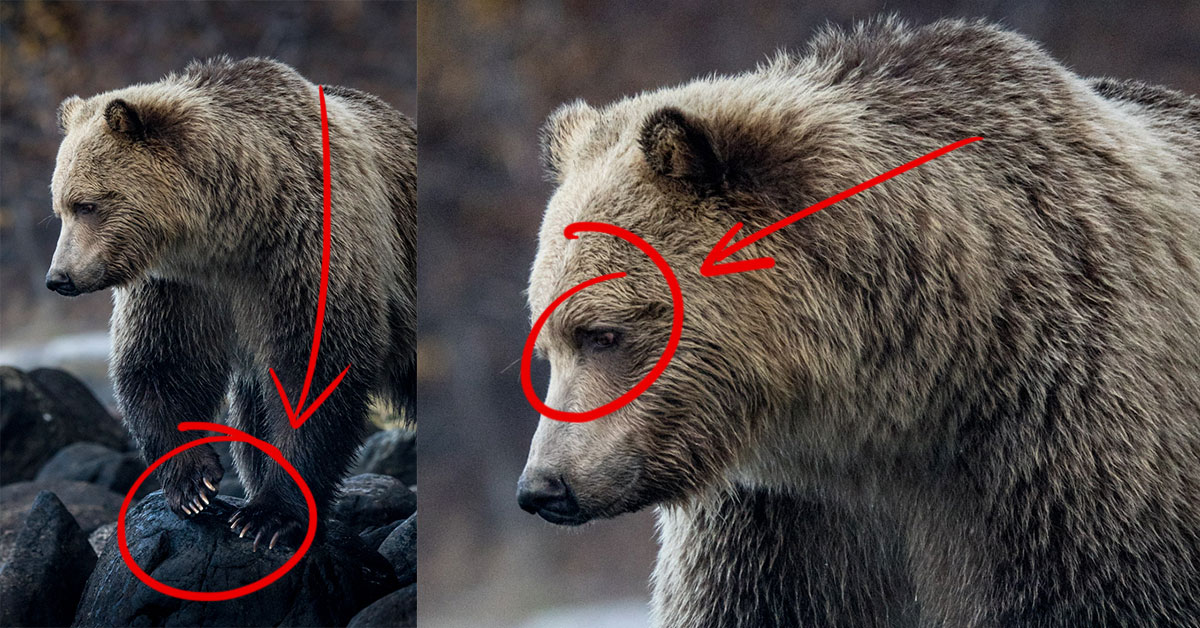 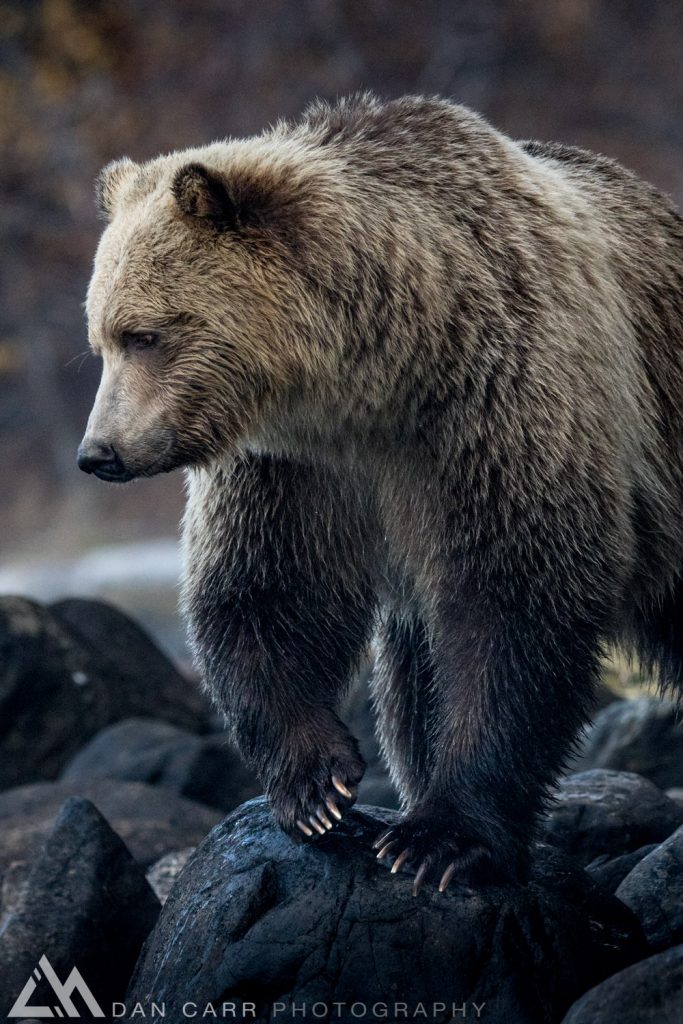 I posted this photo on Instagram recently and it was very popular, so I thought I’d make it the subject of this week’s Behind the Shot article.  It was taken a couple of months ago while I was in the Chilcotin Mountains of British Columbia.  I was there to photography grizzly bears, and as I have done in the past, I used a kayak to get some unique angles.  Whilst the kayak does add some complexities to such a situation, it provides an incredibly immersive angle because you can really get down low.  Sometimes at eye-level with them, and sometimes even lower when they are standing on things as this beautiful bear is doing in this photo.

The main technical consideration for this shot, as it should be with any wildlife shot, is to get the eye within the plane of focus.  It’s a rare wildlife shot that works well without the eye in focus!  For this reason, I never shoot with a fully automatic autofocus system that takes full control over which AF points are used.  It’s much better to use a small cluster of AF points, or even a single AF point if your subject is moving slow enough that you can confidently place it on the eye.  Of course, this is all much more important when you have a large animal like this bear!  If you were shooting a smaller animal, like a bird, then it’s easier to get the eye in focus even when the focus point falls on their body and not the eye.  With something much bigger, AF systems often get tricked into focussing on the front of the nose and with the shallow depth of field from shooting at long focal lengths, that can leave the eye looking very soft. 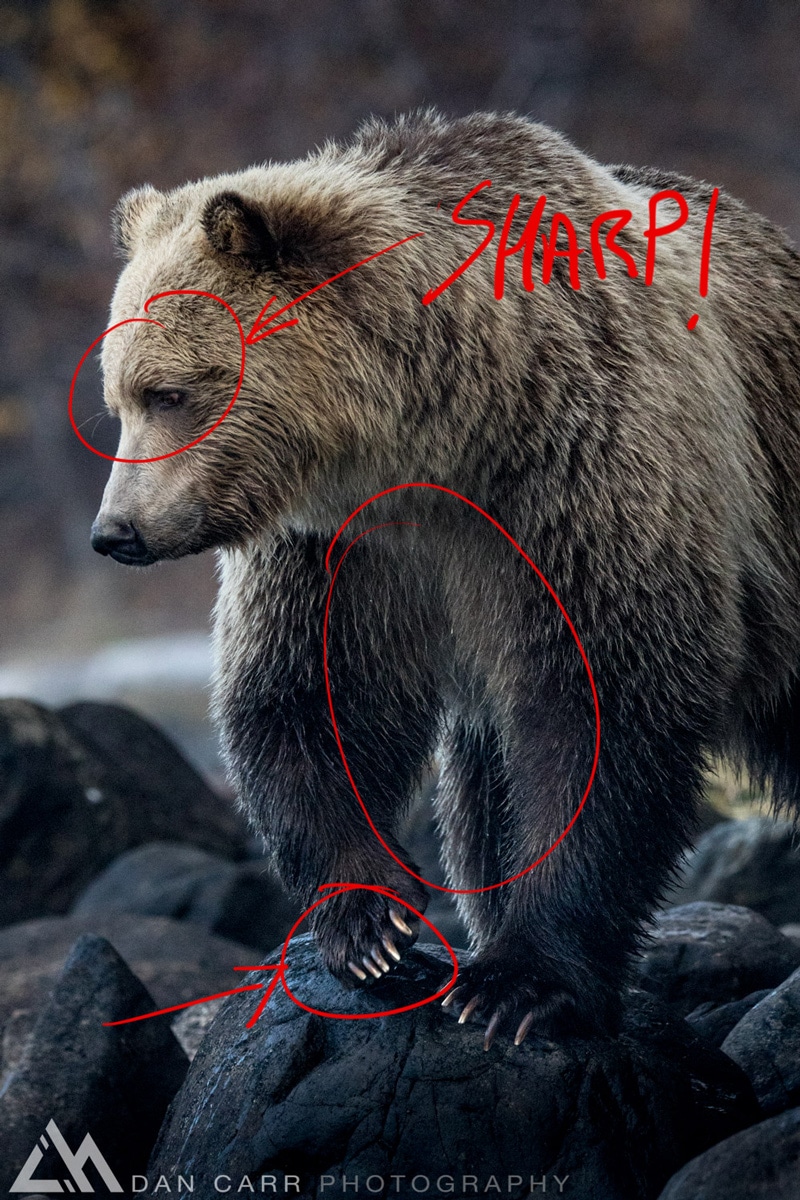 In this instance, I’d seen the bear walking down the shoreline and paddled a wide arc out and around it to position myself in front of it as it crossed the black rocks.  It’s quite a light coloured bear this one, so I figured the almost blonde fur would be a lovely contrast with the black rocks.  The beach either side of the rocks was composed of sand and pebbles that were similar in colour to the bear, so this was a better option.  I selected a decently fast shutter speed of 1/500 because the bear seemed to be in a hurry to get somewhere, and I didn’t expect it to slow down as it came closer.  I was also contending with the ever-present rocking motion of my kayak!  To support the lens and camera in the kayak, I use a Really Right Stuff PG-02 gimbal, mounted to one of their carbon tripods, the TVC-24L.  The gimbal allows me to balance the setup perfectly so that it takes no effort to hold or position the otherwise heavy combination.  The Canon 200-400 f/4 L IS 1.4x is a beast of a lens!  You can see a photo of my kayak setup in the post from a couple of days ago about a recent feature of mine in PDN magazine, and also in this previous Behind the Shot post.

Having established a necessary shutter speed, I then looked at getting an aperture that would maintain some depth of field in the bear so that we could see plenty of details in the fur.  With f/8 chosen, I then needed to bump the camera up to ISO2500 to achieve a correct exposure with my chose aperture and shutter speed.  Thankfully the Canon 7D Mark II produces some great images at that setting.

As the bear walked across the rocks, I didn’t shoot photos continuously. There was one more thing I need to get in the shot to complete this image: The claws!

Whenever possible, I like to try and underline the most impressive features of a particular species.  For grizzly bears, their teeth and their claws are the two things that often make people stop and go WOW! As this bear walked along the rocks, I shot short bursts of photos every time a paw was raised into a position where the claws of one foot were prominently displayed.  This underlines their size, but it also adds some movement to the image which I like.  The brighter tone of the claws, compared to the black rocks also creates contrast which immediately draws out attention to them.  As the bear crossed the rocks there would have been many opportunities for a “good” photo, but only a couple of split seconds for a truly great one when all of these factors aligned.  Pre-visualizing the shot, and getting myself into position was what allowed me to head back to shore with a smile on my face this time.

As usual, I did a minimum amount of processing in Adobe Lightroom CC.  I used the de-haze slider to remove a slight lack of overall contrast from a rising fog off the water, and then I used a localized adjustment with the shadow slider under the bear’s chest to bring back in a bit of detail indicated in the image above.  I also made a small tweak to the brightness of the rock on which the bear is standing, to get a nice graduation to black on the right-hand lower side of the rock.  This helps push the eyes towards those lovely claws.