Behind the Shot: First Drop in Alaska

by Dan Carr | Jan 8, 2016 | Action and Adventure Photography, Behind The Shot 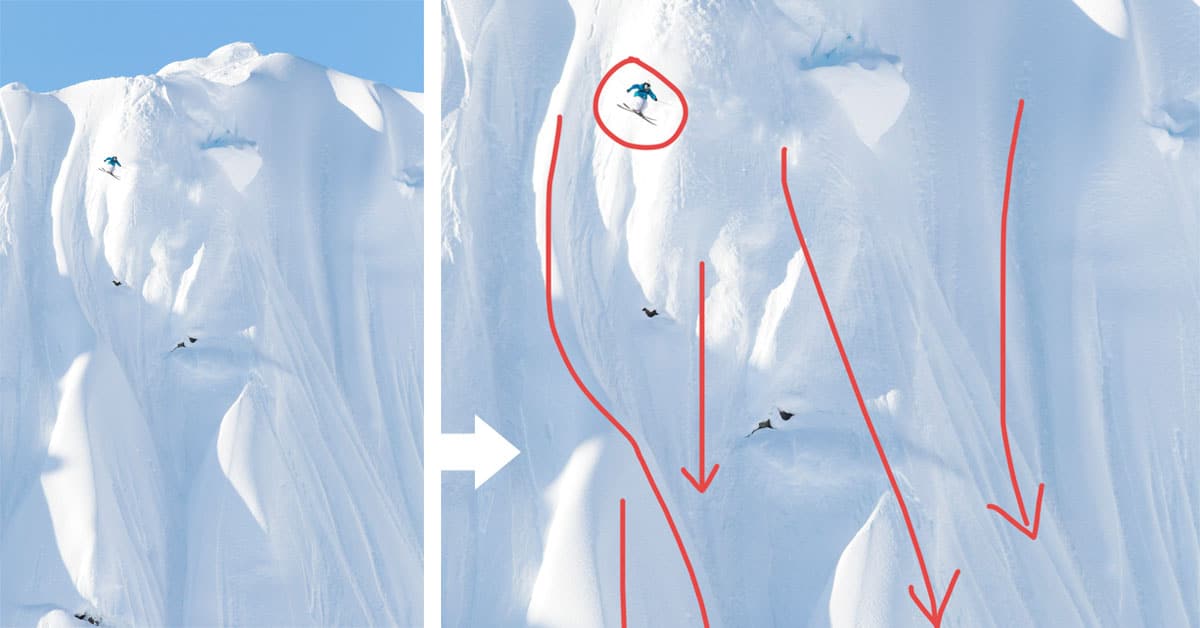 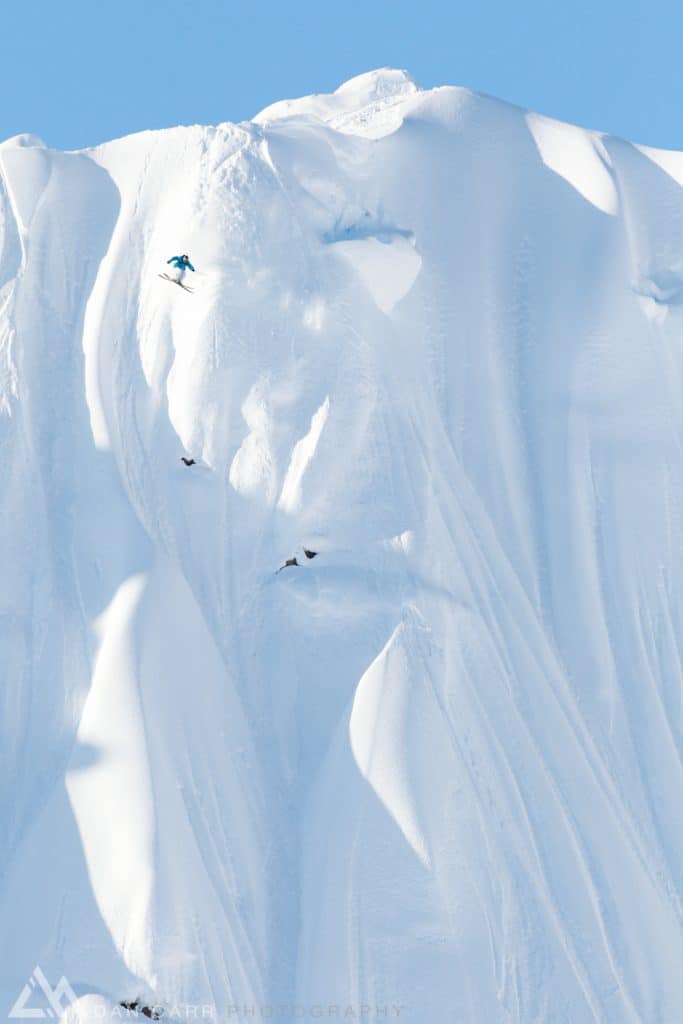 I thought that this week we’d actually re-visit one of my all time favourite skiing photos.  This is a shot of professional skier Dane Tudor from a few years ago, in Haines, Alaska. Haines is a famous spot for heli skiing and I was up there with him to shoot some photos for his ski sponsor at the time, Salomon.  This was his first time in Alaska, and mine as well.  It’s quite an intimidating place to ski, and from a photography perspective there’s also a lot of pressure to get the shot when a helicopter can cost over $10,000 per day.

Skiing in this kind of terrain is a waiting game, though.  You need fresh snow to make the skiing good, but you also need good weather for the helicopters to fly confidently.  You can’t take a chance on a small window of weather because they might be able to fly you out to the terrain, but it’s not much use if they can’t also fly you home again! On top of these two factors, you always have to take into account the snowpack stability.  Will the whole slope rip off as one giant avalanche as soon as the skier touches it?  Whilst that didn’t happen on this shot, it DID happen a few days later on this same trip and I came uncomfortably close to being in a very bad situation which was thankfully averted by good preparation and safety knowledge. 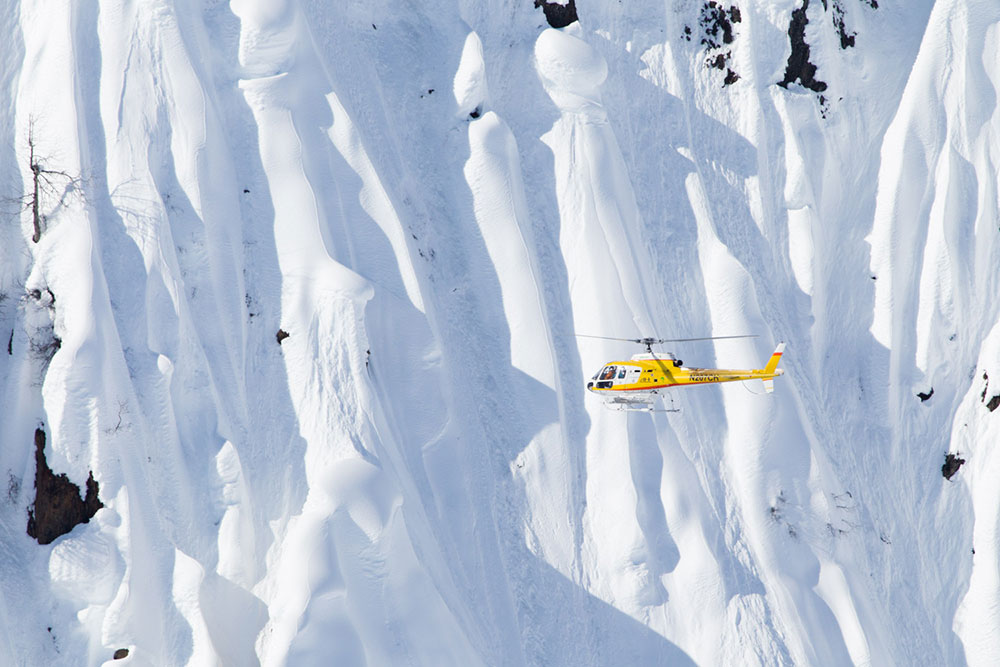 One of the remarkable things about this shot is that it was the very first run of the day, on the first day we had been able to get out into the mountains with the conditions required.  As this was Dane’s first time in Alaska, it’s fair to say this was a pretty ballsy move to make before breakfast!  There’s no warm-up runs in Alaska… when it’s good, it’s good, and you go!

The ridge line in this area was actually curved enough that the helicopter could drop me off on the opposite side and I would essentially be opposite the skiers.  After we were done, I’d ski down to meet the skiers at the bottom of their lines and we’d all ski down further to the helicopter which would pick us up further below, long out of reach of any avalanches. 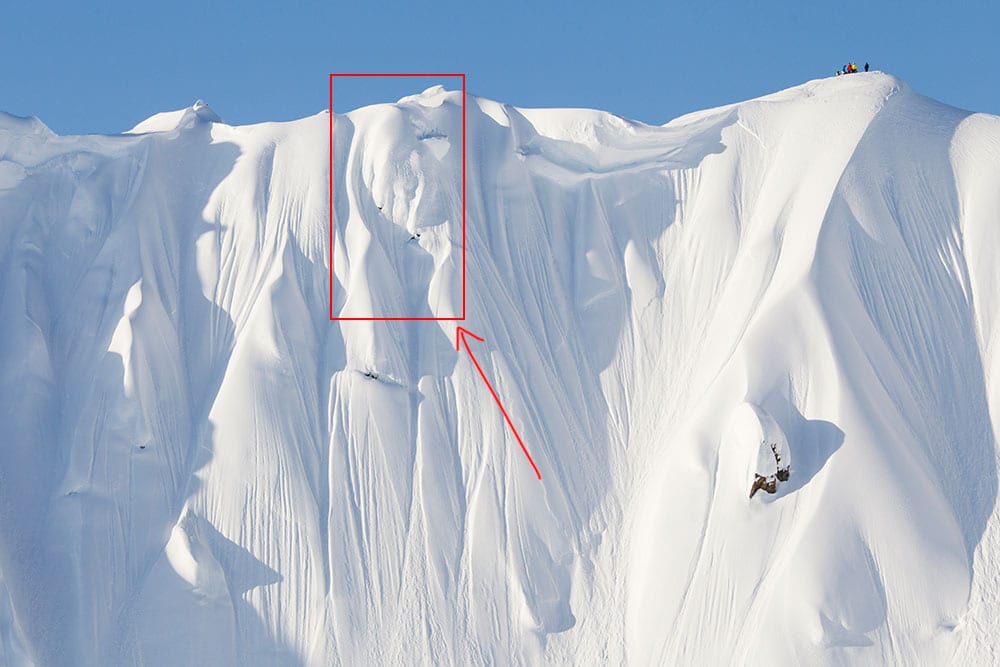 Why Does the Shot Work?

I had 1.4x and 2x extenders with me for my 300mm lens, so I could have shot at 420mm or 600mm, or we could have positioned ourselves close around the ridge.  To show a sense of scale, though, I shot much looser at 300mm and made sure to show the area where the skier intended to land.  If someone is going to do something so extreme, you want to show people just how extreme it really is!  Extreme sports photography is all about underlining how big, or how far someone is willing to go, so tight shots are usually not the way to go. Had I shot this much tighter, for all you know it might have been a 10ft drop instead of 50-60ft. 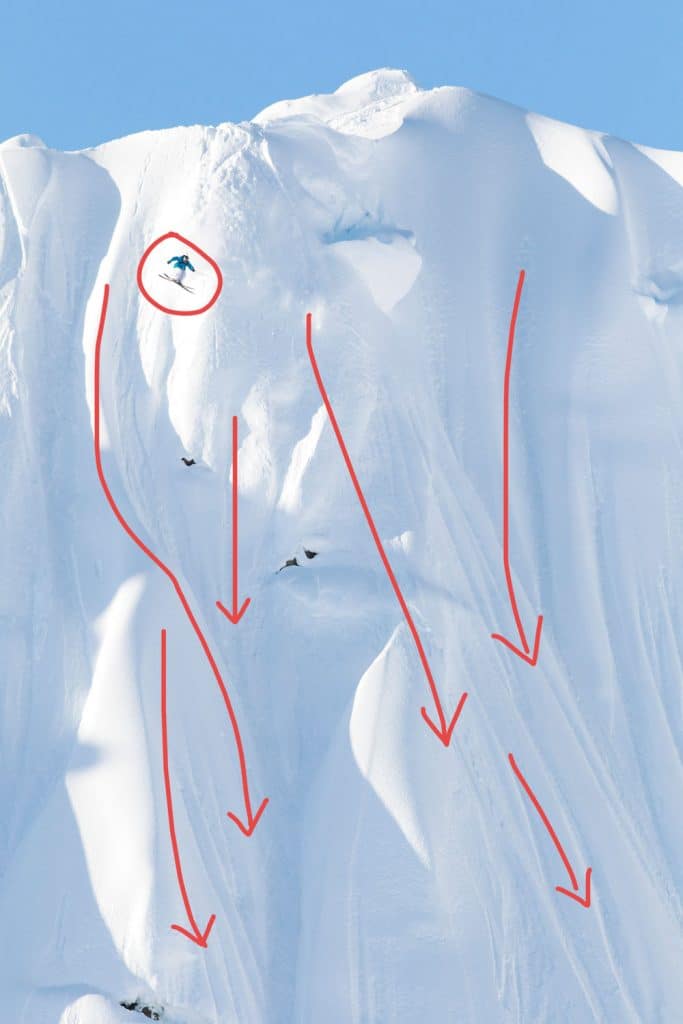 The choice to shoot vertically also works well with the leading lines provided by the snow spines.  The bright blue jacket on the skier allows you to hone in on him quickly, but the eye is invited to pan downwards across the image after that so see where he’s headed.  I always look for a clear subject, but also for ways to invite the viewer to explore the image after revealing that subject.  I’m also aways on the look out for contrast, and here it’s provided by the shadows on the snow, the blue/white contrast of the skier on the snow and also the blue/white contrast of the sky.  Finally, there’s a size contrast as well because the composition shows us how tiny the skier is compared to his surrounding terrain.

The single most important thing about this shot from a composition point of view, is getting the skier on a clean background.  Backgrounds are MASSIVELY important when you are taking a shot like this that has a small subject in a large landscape!  It’s important for the subject of the shot to be instantly visible so you need to contrast them on a simple, un-cluttered background.  As you can see, the skier is against a perfect patch of pure white snow, rather than being in an are which had shadows or texture.

The skiers path is predetermined, and he simply threw a snowball on his intended trajectory so that I could set up in exactly the right spot to get him in that position in the frame. Once he counted down 3,2,1… DROP, I shot a quick burst of images to make sure I had one where his entire body and skis were in the white area.  Funnily enough, even though this was the first shot of the trip, it ended up being the ad which was run around the world by Salomon.

Stefan Scherff – Why did you go with ISO 500? I guess you could have done it with a bit less shutter speed too and by that reducing ISO?

Dan Carr – ISO is an enabler to achieve either a shutter speed or an aperture that you require for a specific reason. So the question is, why did I need f/8 or 1/1250 ? 1/1000 is a minimum for this situation to get a sharp skier when he’s moving that fast. The extra 250 is a safety buffer because I don’t want to mess up a one time thing! F/8 is to ensure sharp focus on all the spines of snow because they are providing a beautiful texture and I don’t want that softened. Put those two things together and ISO 500 was need to get them.

Do you have a question?  Leave it below in the comments, or on the post on my Facebook page.

Gear Used To Take This Shot 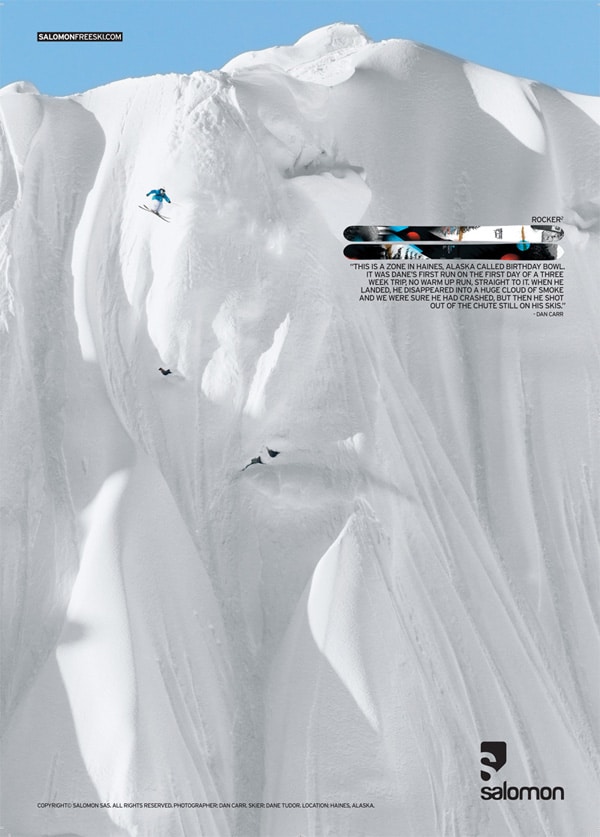