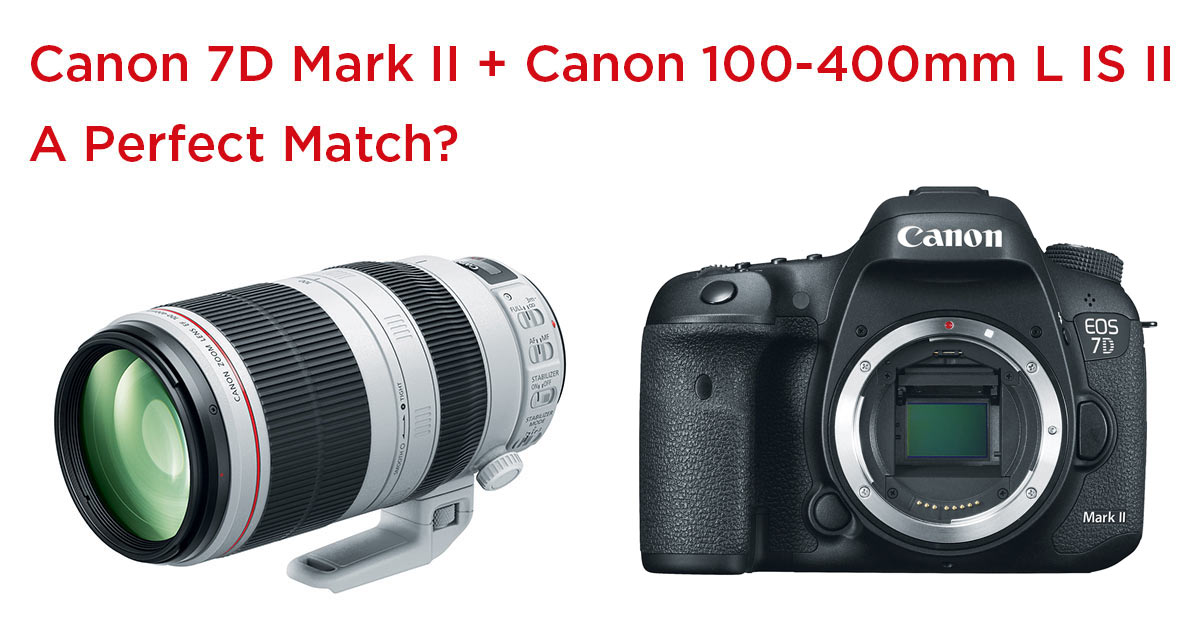 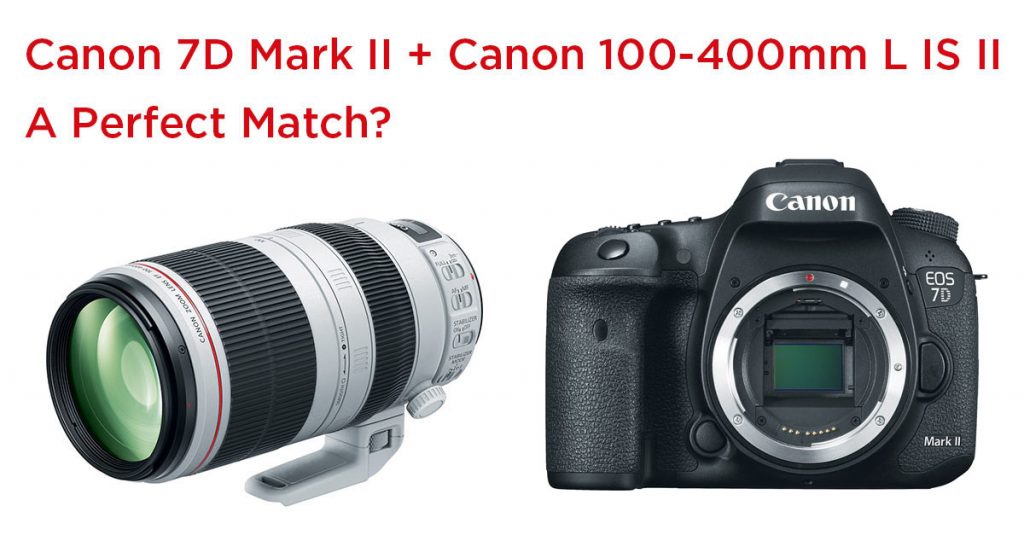 For Canon folks, the 7D Mark II is definitely the most exciting camera announcement of 2014, particularly if your hobby (or job) is shooting sports or wildlife images.  The original 7D was popular in these niches as well, but Canon have gone after these markets in a much bigger way with the 7D Mark II.  The 65-point AF system is generally on a par with that of the 3-times more expensive flagship EOS 1-DX, and in fact features a much wider spread of AF points across the frame. I think it’s the best AF system I’ve ever used, and the customization options are frankly incredible.  Here’s an example of one of my 7D Mark II customizations that I call “Dual back button AF”:

Hopefully you are all familiar with back button AF, where the AF is only active when the AF-ON button is pressed on the back of the camera.  On the 7D Mark II I have the AF-ON button assigned to engage AI-Servo tracking, but I can also assign the * button next to it to engage single spot-focus in One-Shot focus mode.  This way I never have to use any menus to switch between AI Servo and One-Shot focus.  I simply hold my finger down on whichever button I need.  I can even squeeze the DOF preview button to engage full 65-point AF at any point as well.  Switching between AI-Servo and One-Shot in a fraction of a second is incredibly powerful, particularly with wildlife photography.  You can use the super accurate spot AF point to set focus on your static subject, but if they suddenly start to move, just move your finger to the AF-On button next to it and you unleash the full power of the AI-Servo system instantly.

As well as the incredible AF system, the 7D Mark II is also built like a tank and according to LensRentals.com, has the best weather sealing of any DSLR they’ve ever dismantled.  High praise from a company that’s probably got more experience with dissecting camera gear than anyone else in the business.  A solid build and strong resistance to the elements also make it a great wildlife photography option where you’re often out in the wild and want to have the option to brave all weathers while you wait for your critters to appear. Let’s not forget as well that when they do appear, and the lightning fast AF system locks on, you’ll be able to fire shots off at a blistering 10fps. 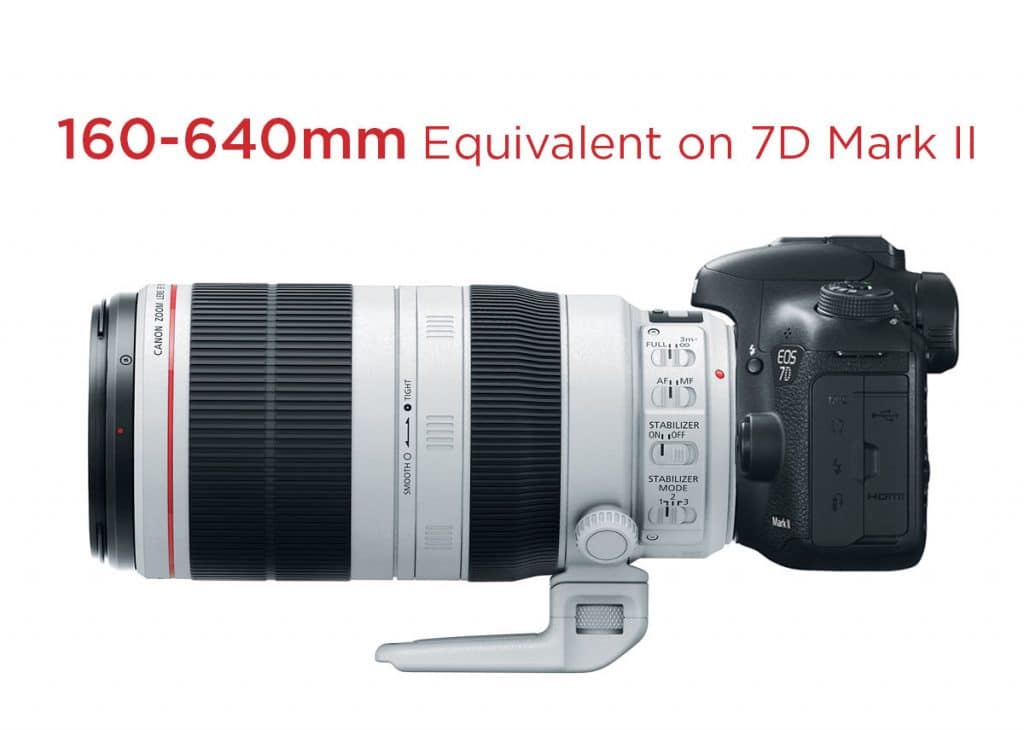 Shortly after the 7D Mark II hit the shelves, Canon also unveiled the long awaited replacement to the 100-400mm L IS, the 100-400mm f/4.5-5.6 L IS II USM.  The term “long-awaited” often gets thrown around in the photography world because we’re an impatient bunch, but this time it’s fair because the Mark I was 16 years old!! That’s half my entire life!

When it comes to sports and wildlife photography there’s really no escaping the fact that you’re going to need a pretty long lens.  You might be happy with something in the 400mm range, but quite often you’ll need longer than that, especially if bird photography is one of your favourite subjects.  Quality long lens options are relatively few and far between and the old 100-400 has been a steady seller for it’s whole life to fill this area.  Yes there’s the old 300mm f/4 IS and the 400mm f/5.6 as well, but the zoom has always been a more popular choice.  What we need to remember is that on an APS-C sensor camera, like the 7D Mark II, the 100-400 is actually a 160-640mm equivalent.  Now we’re talking!!  640mm is a very respectable focal length for wildlife photography, and more than enough for most sporting applications.  For the first time in a non 1-Series or 5-Series body, Canon have also included the ability to autofocus with a lens featuring a max f/8 aperture.  This is HUGE news for wildlife photographers as well, particularly with this lens because it means you can attach a 1.4x extender to this lens and get an equivalent 896mm lens and still use autofocus.  Not only that, but it seems that Canon are so confident in the performance of this combination that they included MTF charts for it and they look pretty damn impressive.  In fact, for the first time, Canon also included MTF charts for this lens with a 2X extender on it!  Now that particular combination will not autofocus on ANY Canon camera, but the mere fact they included the charts suggests to me that they are quite proud of the results and this would give you 1280mm equivalent focal length which is just insane! Check out the graphic below for your options. 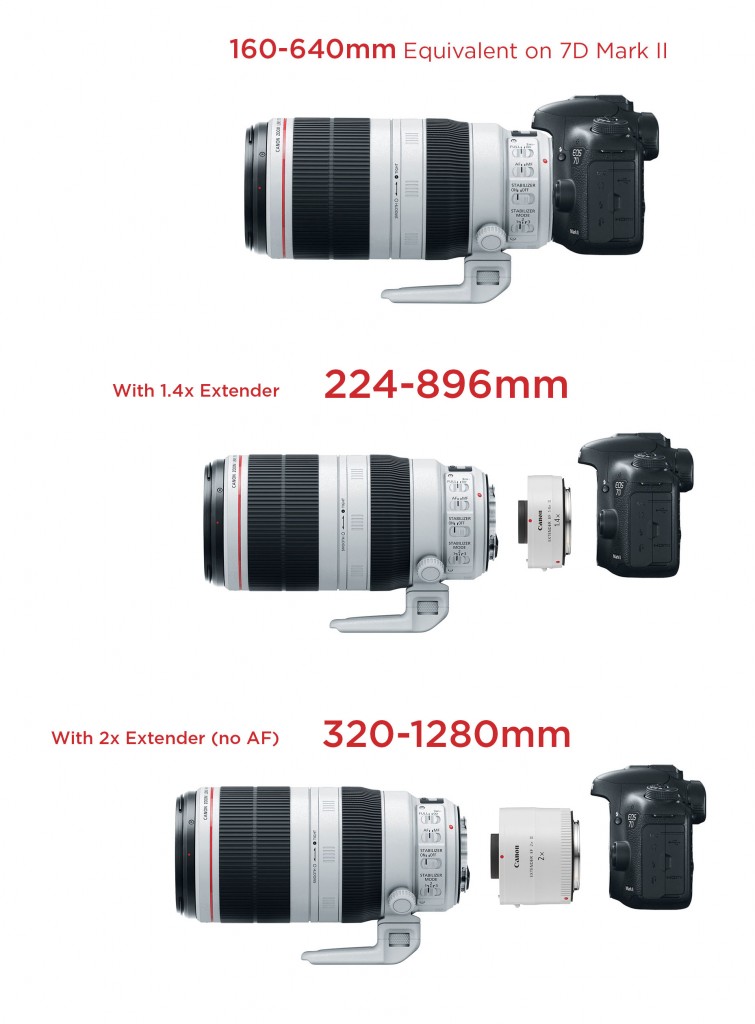 The 100-400 features several new innovations for a Canon zoom lens as well.  Firstly it comes with an all new type of lens hood that has a small window in the side for allowing you to adjust a circular polarizer.  This is of less significance to sports and wildlife shooter who rarely use such filters, but it’s a nice improvement nonetheless. The next improvement is in the design of the lens foot.  As you can see from the images on this page, a small thumb wheel now allows you to release the foot when it’s not needed.  Importantly, it’s no longer joined to the actual ring so you can quickly and easily store it in your bag when it’s not needed. All previous models where a right pain in the ass to store as you had to remove the whole ring and it was very awkward!  Another first for this lens is the variable friction control for the zoom mechanism.  The Mark I version of this lens featured the infamous “dust pump” push-pull zoom mechanism and for the Mark II this has thankfully been replaced with a more standard zoom ring, with an added friction control that allows you to customize the feel of the zoom, and also lock it out to prevent creep when carrying.  Optically this lens features a fair bit more glass than the original version and that accounts for the slight weight increase, even with the new magnesium chassis.  It also features multi-layered Air Sphere Coating (ASC) technology which uses trapped air bubbles between glass to decrease the deceleration of light as it enters the lens and cut down on ghost and flare-causing reflections.  Canon’s recent run of zoom lenses (200-400 , 24-70 f2.8 L II, 70-300 L IS etc) have been remarkable in terms of optical performance and in some cases surpassing, or at least equalling the prime equivalents that their zoom range passes though.  Given the extended development tim of this lens, and the recent quality of Canon’s zooms, I suspect this lens will be quite remarkable compared to the original version.  The MTF charts that you can see below also confirm some impressive performances.

So is this pair a perfect match?  For $4000 you can get a 10fps shooting camera with best-in-class AF system and an equivalent reach of over 600mm.  I know there are other options for zoom lenses, like the excellent Tamron 150-600 which I have here mounted to a 7D Mark II in front of me.  But the Tamron is a much larger lens and the relatively compact 7D + 100-400 package is, for me, one of its most attractive features.  It’s a combination that you could put in your pack, along with a wide zoom like a 16-35 f/4 L IS, and be well equipped for a day of landscape and wildlife photography or a sporing event from the sidelines.  A killer, simple setup that doesn’t break your back or the bank.  Not that $4000 isn’t a fairly hefty price tag, but when you consider the price of other options like the a 400mm prime or a 600mm prime, this is a drop in the ocean. 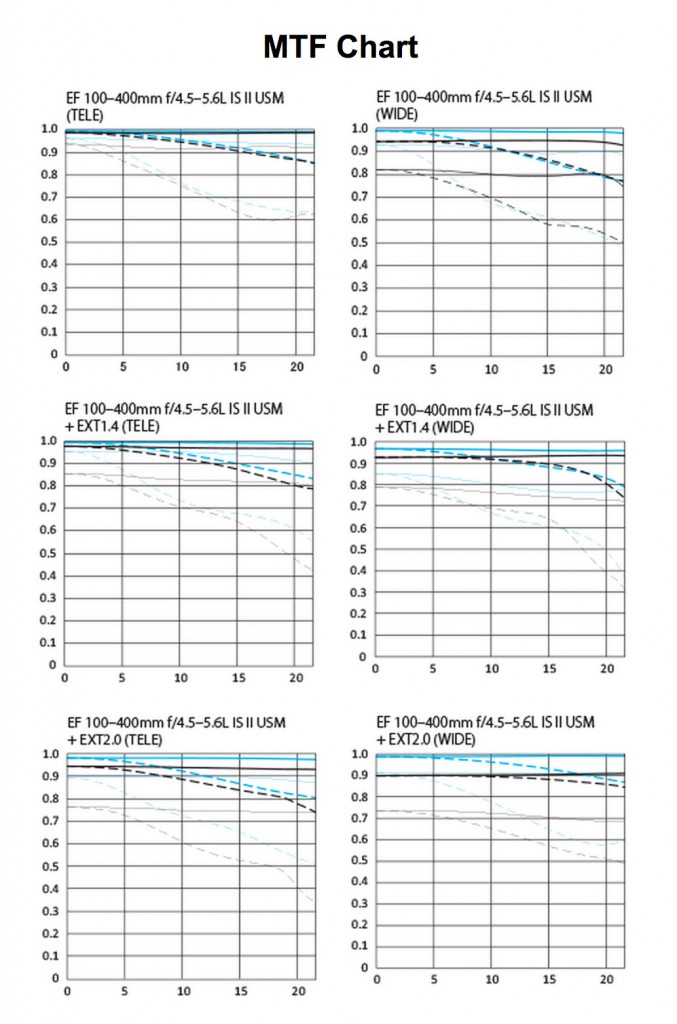 Will Your Camera AF at f/8?

Not sure if you will be able to maintain AF with your camera, and the combination of the 100-400 + extender?  Since this is a question that was asked so often in the comments, I have created a resournce to list all cameras that will maintain AF with a lens+extender combination that delivers a max aperture of f/8.