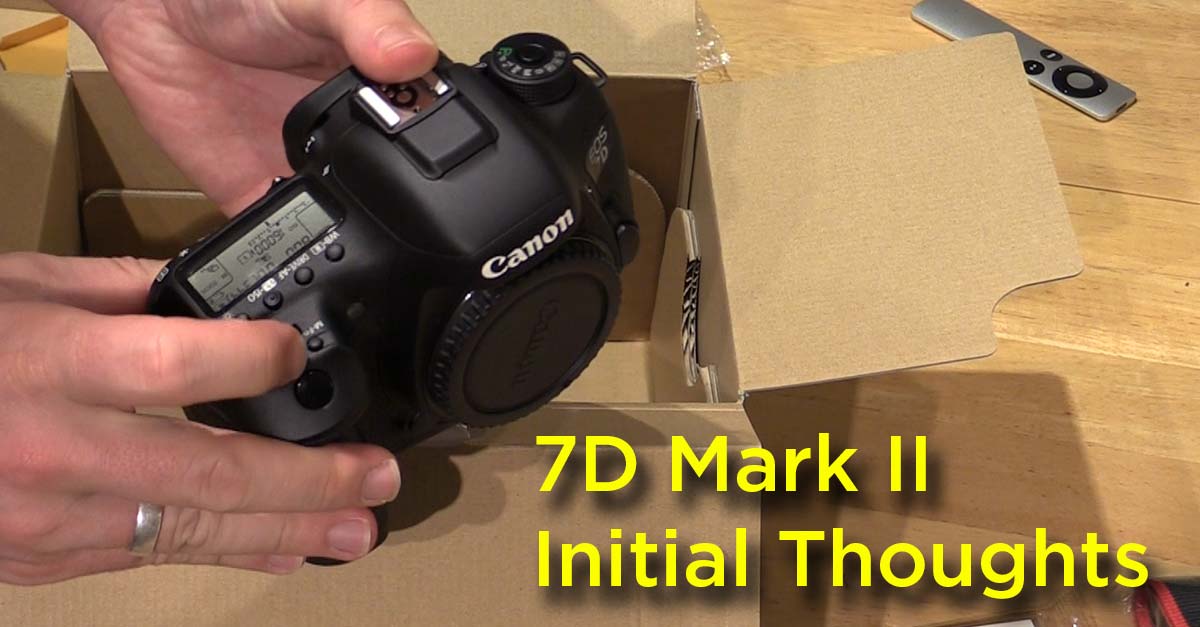 I picked up my new Canon 7D Mark II  from the first shipment that came into Canada so I wanted to share a quick video with you guys, and also some very initial thoughts about this interesting camera. The second version of the 7D has been a very long time coming and the original continued to sell well right up until the end.  I owned a 7D at one point, but I was never happy with both the level of noise and also the structure of the grain that it produced.  Something about it really rubbed me up the wrong way.  That was about 5 years ago though so as soon as I saw the specs of this camera I knew I was going to have to give it a try.  The reason for buying the original one was that I wanted to get the speed it offered, in a smaller body than a 1-series camera.  Even more so than the first version, the 7D MKII is very clearly aimed at sports and wildlife photographers with its 10fps burst speed and impressive 65-point AF system.  Once again, the speed in a small form-factor was a compelling reason to purchase one, but this time so is the crop factor of the APS-C sensor.

In the last couple of years I’ve really broadened my photography to include a wider variety of subjects.  Part of that meant purchasing the new Canon 200-400 f4 L IS with the 1.4x extender for some wildlife photography trips.  That lenses 200-560mm range is brilliant, but every now and again I feel myself wanting a little more reach.  There’s no way I can justify spending another $12,000 on a 600mm f/4 (for now at least), so the 1.6x crop factor of the 7D MKII suddenly becomes very attractive.  Instead of spending $12,000 on another lens, I can turn my 200-400 into a 320-896mm.  That’s a heck of a range!  In fact since the 7D MKII is relatively small, I could carry a 5D MKIII in the bag as well so with one lens I can cover from 200mm all the way up to 900mm.  Amazing!

Now this post is just some initial thoughts having had the camera in my hand now.  The weather here in British Columbia has been absolutely abysmal and I haven’t yet been able to shoot what you might call ‘real’ photos with the camera.  Just a few tests in my home.  Over the coming weeks you can expect several more articles about this camera as i get to know it better.  It deserves a lot of coverage because it’s an important camera in Canon’s lineup and I know that many of the people that follow me and my work are looking eagerly at this because it’s really aimed at my niche.

Right away you can tell this is a solid camera and in the hand it doesn’t feel dissimilar to a 5D MKIII.  The original was also a magnesium body though so this isn’t much of a surprise, though the MKII has gained a few extra buttons which come in handy for taking control of the mammoth AF system it’s now packing.  Side-by-side with my 5D MKIII they are essentially identical in size.

An APS-C camera will always have a smaller viewfinder window than a full frame camera because the pentaprism is that much smaller. The 7D MKII’s viewfinder covers 100% though and I didn’t find it too constrictive.  I remember when I first moved up to a full frame camera I couldn’t believe how big the viewfinder seemed, it was like looking through a fishbowl, so I was worried about going back down in scale again.  I shouldn’t have been, it wasn’t a problem.  What I was interested to see was that the exposure meter has been moved to the side of the viewfinder, like the 1-series cameras.  A change that I’m definitely in favour of.  Most exciting though is the spread of the 65 AF points.  These points now cover a much larger width of the viewfinder which is BRILLIANT.  Honestly, this is maybe the most exciting thing for me to see so far.  It’s even better than the 1D-X in that respect and I can’t wait for them to carry this on to ew models in the future as well.

In terms of operability it’s just like riding a bike.  Canon haven’t changed their user interface much in the last few years and I was at home right away.  Turn the lights off and I’d be able to operate it all as if I’d owned it for years.  The M-FN button is now present next to the shutter button and you can use custom functions to assign all manner of options to it.  There’s also an interesting new lever that surrounds the direction button that we haven’t seen on any other cameras.  What’s a little weird is that with the default setup, it basically does the same thing as the M-FN button does, in that it cycles through the AF point selections.  You can customize its function, but it really wasn’t immediately obvious to me what I wanted to use it for.  I tried all the options, and eventually settled on a setting that returns the AF point back to the central point if you have moved it around.  I can see some use to that, but in all honesty, the addition of this new lever isn’t going to seem ground-breaking to anyone as controls were, in my opinion, already pretty well managed.

Oooooohhhhh #canon #7dmk2 #7d2 #cameraporn Jokes aside, I’m looking forward to using this. It’s small size and fast speed definitely make it a compelling choice and so far I have got to say I’m very impressed with high ISO performance.

So this camera is pretty fast!  10fps is music to my ears and I was pleased to find that so far, it does seem to be a genuine 10fps.  With the original 7D, it had a habit of slowing down quite a lot from it’s advertised 8fps.  Relating to the speed, I was glad to see options in the menu system for defining the speed of the burst mode options.  If 10fps is too fast for your needs then you can turn it down to whatever you want.  Likewise, you also have the option to define the slow speed as well.  I did play with the ridiculous JPEG buffer as well, which is to all intents and purposes, unlimited.  I think the officially quoted limit is over 100 continuous shots but I can’t see too many people coming across the buffer limit in real shooting.  Fun to play with for a bit though!

Look I’ll tell you guys right now that this is some seriously unscientific testing with the ISO at the moment.  I could sit here and shoot crappy test objects all day in my office but the reality is that I need to evaluate it in a real situation to draw a solid conclusion.  What I CAN say though is that I’m seeing less noise than I expected, and in particular, the noise seems to be much more confined to darker areas.  This will favour “shoot to the right” exposures.  The other problem with drawing a conclusion right now is that Adobe does not yet support 7D MKII raw files at the time of writing this.  Canon’s DPP 4.0 software will work with them, but Adobes noise reduction algorithms are far superior so it’s hard to tell right now what I will set as my own personal stop point in terms of useable ISO for my work.  The important areas for me are in the 1600-3200 range because this is where I’m currently comfortable with my 5D MKIII.  I don’t expect this camera to beat the full frame 5D, but if it cane come close, say 1/3 to 2/3 of a stop, then I’ll be a happy chappy.  We’ll also need to look at the quality or ‘personality’ of the noise though because believe it or not, each camera is very different and grain structure can make it or break it for some people.  A lot of my distaste for the original 7D was not so much how noisy it was, but how that noise looked.

I’m going to have to do more testing on this and I’m also going to compare it both to a 7D and a 5D MKIII because this has been the most requested thing people have asked me to do.

I’ll leave it there for now, but expect several follow up articles in the coming days and weeks as I get to know this camera even more.  If you are thinking of buying one of these cameras (or in fact any other) it would really mean a lot if you clicked through the links on my pages! BIG thanks to everyone that does!