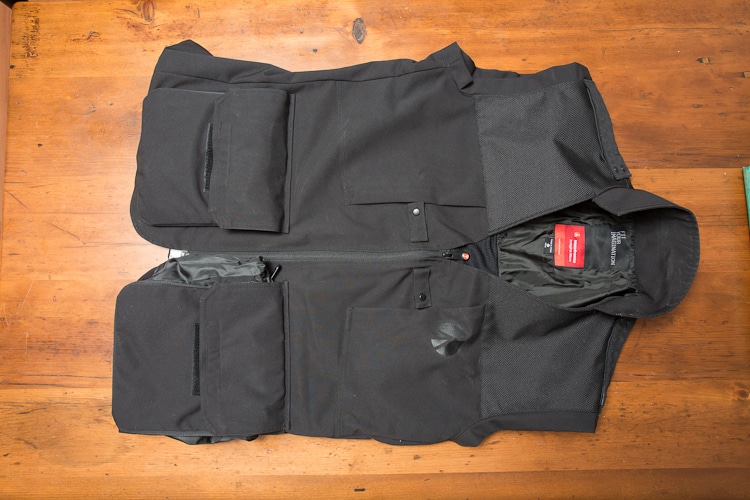 The folks at Manfrotto Canada recently provided me with one of their Lino Photo Vests for evaluation and I’ve been using it for a couple of months now.  Being an item of clothing I felt I should wear it in my introduction video so take a look below as I run through the main features of the vest.

The Manfrotto vest doesn’t have as many pockets as some of its competitors out there like the Domke vest but the most important pockets are well thought out.  Frankly it would be unhealthy to ever fill all of the pockets of some of the other vests I have seen so keeping it simple and decidedly more svelte is a big plus in my opinion.  The two main pockets are expandable to an enormous size, big enough to fit a pro-sized camera with a lens attached.  The interior pockets need a little more thought from Manfrotto though.  You get two small hook and loop closure pockets which are about the size of a business card.  I couldn’t think of anything to put in them except perhaps some AA batteries  but their positioning made it awkward to easily access them.  Then there is the two laminated pockets on the right hand side that come inserted with Manfrotto product cards suggesting you insert either of their table top tripods in there.  Neither of these pockets have any way to close them and with the target market for this jacket I can’t think who would be carrying a pocket sized table top tripod ?  Those pockets are essentially useless for anything more than storing some business cards.  There is one more pocket on the left that is zippered and is reasonably large.  This pocket is best used for some snacks or a pair of gloves, nothing too bulky because being directly opposite the large exterior pocket presses the contents of it into your leg quite uncomfortably.  Essentially I quickly stuck to using the external pockets only on this vest which is what it is all about anyway. 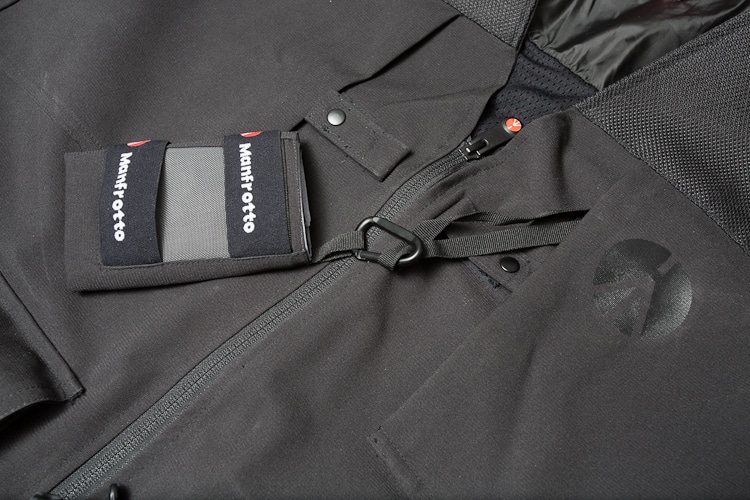 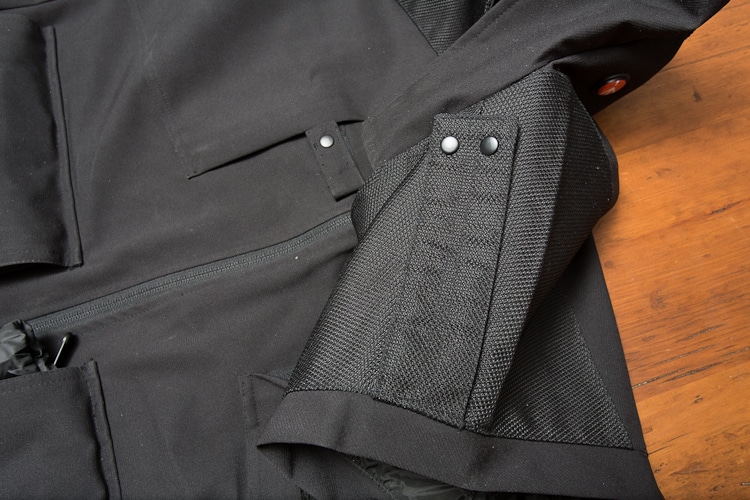 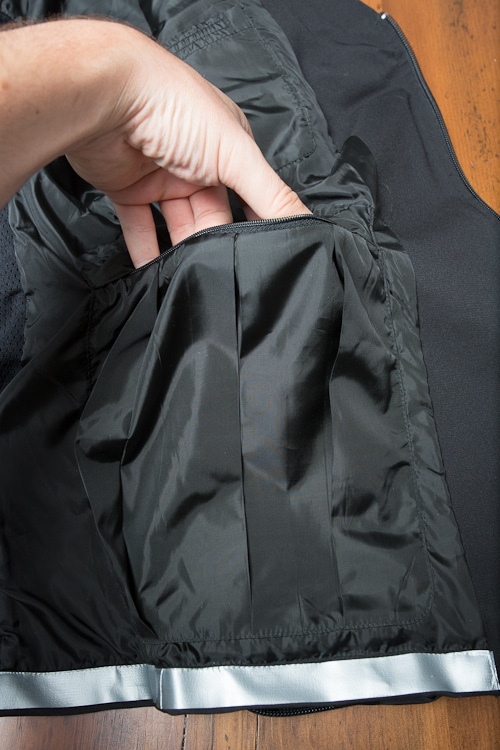 My favorite innovation of the design is the ability to re-purpose the padding from the pocket as a knee pad.  Sports photographers all know that numb knee feeling you get from being on the sidelines of the football pitch all afternoon and as a motorsports photographer it can be worse as the trackside space is concrete.  I put the knee pad to use on several occasions whilst shooting this years 24 Hour of Le Mans and it worked just fine, even offering thicker padding than all the dedicated knee pads that I saw other photographers using.

I’m also a fan of the little memory card holder that is included, its very lightweight and holds a huge number of cards.  I’ve been using Think Tank’s memory card holders for some years but I actually prefer this Manfrotto one.

Manfrotto have also tried to design a system that transfers the load of the main front pockets up to your shoulders.  An internal suspension system attempts to pull down directly on your shoulders with the weight of the pockets and tries to minimize the forward pull that a heavily laden front pocket would have.  Does it work ? Well nearly…. As soon as you put something in the pocket you certainly can feel the pull on your shoulders but in reality I didn’t feel that it aided in the long run.  After a while wandering around with several lenses in my pockets I still began to notice fatigue as I continually compensated for the weight on the front pulling me forwards.  What the system certainly does do though is prevent the vest getting too misshapen with all the gear in the front.

As I walked around the track for the week of the race and eventually the 24 hours of the race itself I tried various configurations of gear.  In the end I settled on my two usual cameras, one on my shoulder with a 70-200 and one on a monopod over my shoulder with my big super tele lens.  In one of the vest pockets I put my 24mm f1.4 and my fisheye and in the other pocket I put my 600EX flash and ST-E3 radio transmitter.  This worked  well and for me represented the most amount of gear I would want to wander about with.  Anything more and I was simply not comfortable. 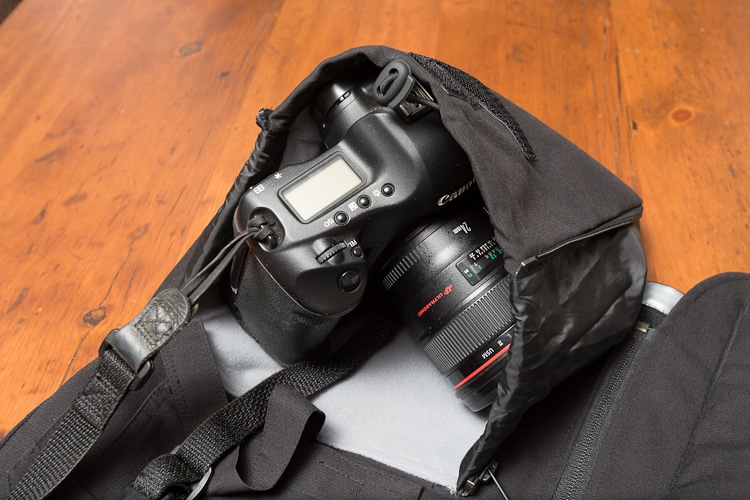 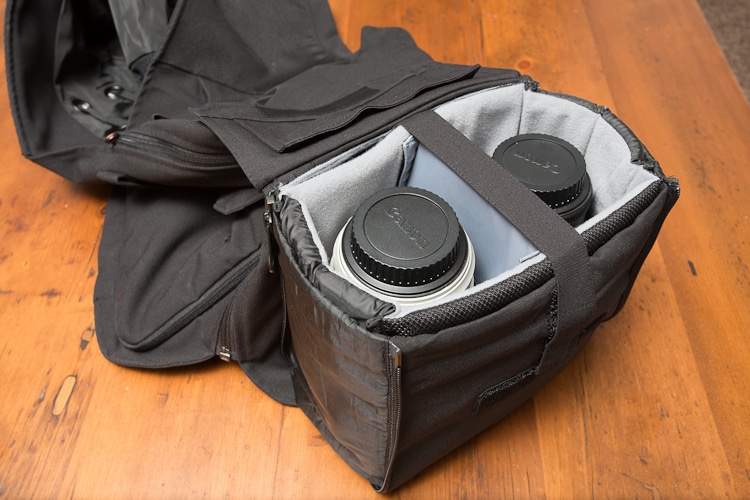 As airlines continually clamp down on the weight and size of belongings that we are allowed to bring on board many photographers end up seeking ways to circumvent the regulations.  A popular maneuver is to wear an item of clothing that has large pockets.  If you find yourself in a situation where your hand luggage needs to be weighed then you can transplant some equipment into your pockets.  The problem with this is that regular jackets don’t hold an awful lot and most peoples vision of a photography vest is a sandy colored vest that makes it looked like you just stepped off an African Safari.  It itself that makes you stick out like a sore thumb.  The great thing about this Manfrotto vest is that being all black makes you far more discreet.  From a distance it doesn’t shout photographer and even up close I don’t believe that most people would make that assumption.

The first trip that I took this vest on was to shoot the Le Mans 24 Hours in France.  Being a pretty large sporting event there were another couple of photographers boarding the plane in Montreal and one of them got the dreaded “excuse me sir can we weight that please?”.  Now luckily this guy was also prepared, he was sporting one of the aforementioned ‘safari vests’ , and he calmly emptied the contents of his bag onto the floor and re-packed it into his vest with his 500mm over his shoulder, gave a nod to the flight attendant and strolled onto the plane.

It does happen, it’s happened to me and there’s a huge amount of satisfaction to he bad from being prepared for it.  What I like about this vest though is that you don’t look like a weirdo all those times when you wear it but it doesn’t become necessary to use it. 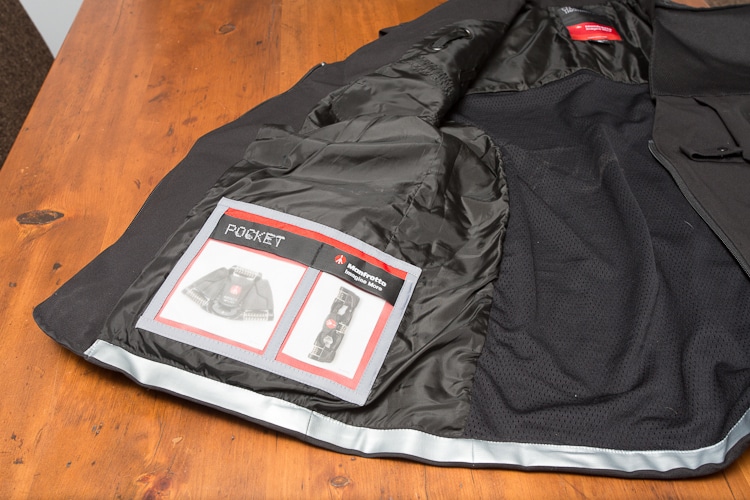 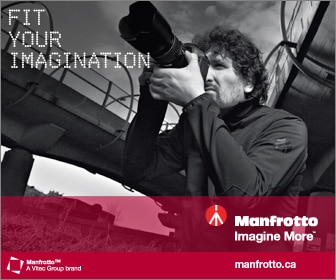 Who’s going to use this ?

I’ve mentioned sports photographers already and this is the most obvious one to me.  They typically need to remain mobile but simultaneously have the gear necessary to react to a wide range of scenarios.  A lot of sports photographers use a belt system, myself included but they can be both annoying in a crowded situation and also a bit clumsy getting in and out of a vehicle or seated area, both things where the vest is less of an issue.  The second type of photographer who is going to benefit from this is landscape photographers.  When I head out for photos of this type I almost religiously use my 24mm f1.4 II lens.  I’ve found that I can put my Canon 5DMKIII in one pocket and my 24mm in the other pocket with some filters, sling my tripod up on my shoulder and off I go, no backpack.  This is extremely liberating to get out amongst nature and feel much less encumbered by your equipment.  It’s a shooting solution that I highly recommend you try at some point.  Photo journalists will also find this pretty useful and will comfortably help them carry the ubiquitous wide angle zoom while the 70-200 is in use or vice versa. 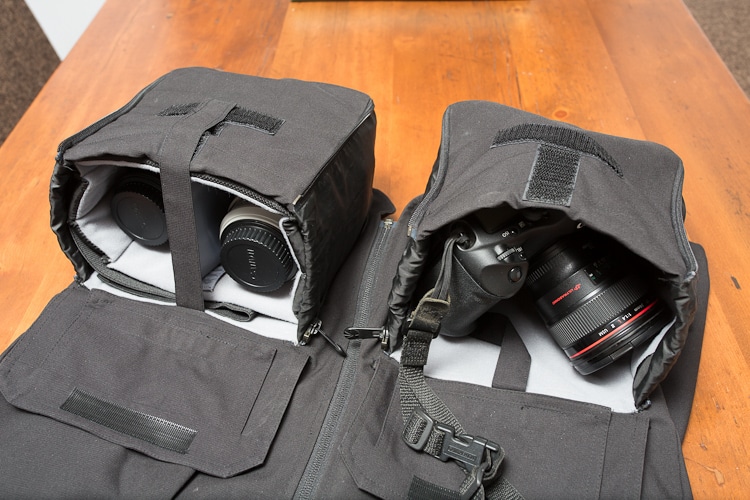 Black is great for a less conspicuous look and a smarter look but on a sunny day outdoors shooting sports it gets very hot!  I would like to have seen a lighter color available as well, or perhaps a lighter colored lightweight version.  The fact is that this is a very very well built vest made from hard wearing, windproof materials.  On a sunny summers day you’ll quickly be sweltering and that is an issue.  The back is mesh and offers some relief but none of the water resistant, wind resistant material on the front seems not to offer any respite.  I know I joked about the safari jacket look earlier on but at the same time it is a popular usage for photo vests and I could not possibly imagine wearing this on such an adventure.  It’s simply far too hot and heavyweight.  On a colder day I would happily wear the vest when I’m shooting but on anything approaching slightly mild I would have to switch to a belt system which can keep you much cooler.  If Manfrotto put some of these features into a lightweight, packable nylon vest in a lighter color then it would have a lot more versatility in terms of weather you could wear it in though then you’re back to looking like a photo dork.  Swings and roundabouts I guess.

Coming into this I wasn’t a photo vest user but quickly appreciated the situations where it can be useful.  What is clear as soon as you pick the Manfrotto vest up is that it is designed, built and priced as quite a premium product.  At more than $220 it is pricey, though you can see where the money is spent when utilizing features such as the removable knee pad.  The only physical design faults come in the implementation of the interior pockets which would have been of limited usefulness even if they had been better thought so overall I was impressed with the feature design.  I do think that the material choice is really going to limit the usefulness of this vest though.  It’s definitely an Autumn / Winter clothing item and for some people a $200+ item that can only be comfortably used for half the year is going to be a non-starter.  Assuming you live in an average climate that is.  If on the other hand you do a lot of landscape photography or sports work in the colder months then I can certainly recommend taking a look at this jacket, you won’t be disappointed in its build or the way it functions to carry your gear.

I’ve placed links to some popular online retailed in the US for this vest but for you Canadian readers I know that you often like to buy in Canada so you should go directly to Manfrotto HERE and they will be able to assist you in finding a local stockist.