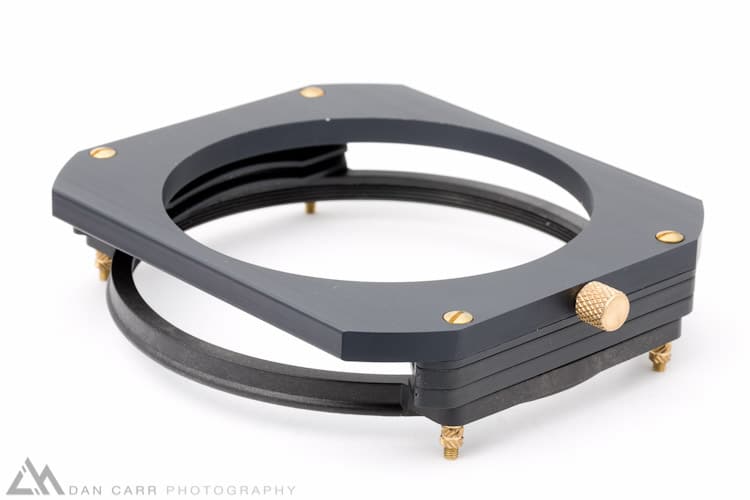 The unit that I was provided with is Hitech’s newer modular system, not to be confused with their previous offerings which featured a set number of filter stages in 2-stage and 3-stage offerings, and not to be confused with previous plastic holders.  The main plate of this holder is very nicely machined aluminum with thoughtfully recessed holes for the mounting screws.  The kit that I’m reviewing came with options for up to three drop in filters and a separate 105mm adapter.  It also came with some spare crews of varying size and nuts to put it all together as you see fit.  One set of spacers was also provided for adding thicker filters such as a 10-stop with a rubber gasket. 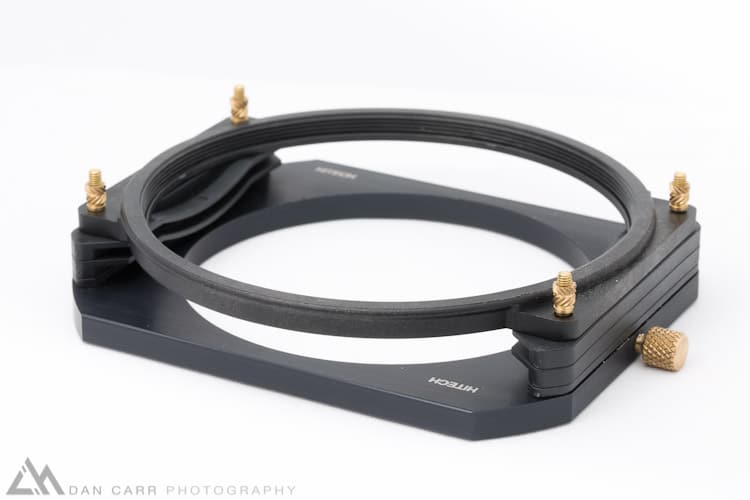 If you’re looking at filter holders then it’s likely that you’re considering options from Lee and Cokin as well and they all vary slightly in the way that the filter is attached to the camera.  All three of those systems have an adapter ring that screws onto the lens’ thread with the Cokin z-pro (the equivalent size to the 100mm Hitech) simply sliding the adapter into a slot on the back of the filter holder and securing it with a couple of pegs.  It’s a solid mounting method but not fast and easy to remove.  The Lee system looks similar to the Hitech but the release is a spring loaded clip which you pull back to allow removal of the filters.  On the Hitech holder, you have to unscrew a small clamping knob.  The problem with the Lee system is that you can inadvertently catch the release knob on something and the whole thing might fall off the lens.  If you tend to put your tripod on your shoulder  while you change positions, you could find your filter system coming loose.  Whilst the Lee holder is the easiest to remove, the knurled knob on the Hitech provides a bit more solidarity for those that do keep things attached while they move around.  My one complaint about the Hitech mechanism is that you have to turn it pretty hard to get it to grip into the adapter ring though.  As you can see in the video above, once turned to its maximum position there isn’t much of the pin sticking through.  Still, it holds well enough and I haven’t had any issues with it coming loose.  If there had been a second knob on the opposite site then it would have been a small improvement.

I also love that the whole thing is tool-free where others require a small flat head screwdriver.  If you need to change the configuration of your holder in the field it is but the work of a few seconds, and spare parts are included in case you loose them.  My biggest issue with the modular system is the plastic 105mm adapter.  Plastic threads are simply not a good solution for something where you are going to be taking something on and off it all the time.  Every time you go out shooting you will be adding and removing your circular polarizing filter so that you can return the very expensive filter to its protective pouch.  Wear on the thread is inevitable and in fact right out of the box I had issues getting my 105mm filter on there.  The Hitech 105mm circular polarizer has a very very thin threaded section, essential one thread, whereas the 105mm holder’s threaded section is perhaps 5 or 6 threads deep.  It didn’t make much sense to me as a the unused threads simply add to the overall thickness of the 105 adapter which leads to easier vignetting issues.  I would love to see Hitech offer a low profile aluminum 105mm adapter designed specifically to match their CP filter.

I’m not talking about optical vignetting caused by the resin and glass in the filters, here we are talking physical vignetting.  Seeing parts of the filter holder within your field of view.  It’s an inevitable issue that all landscape photographers will have dealt with at some point and it essentially relates to how far your filter system extends past the front element of your lens.  Keep stacking things in front of it and sooner or later something will show up in your image. 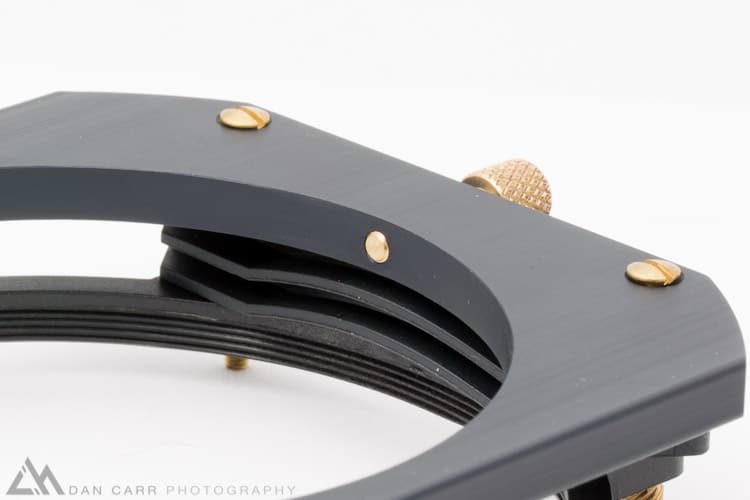 This is the little pin that hold it onto the lens adapter, it doesn’t stick out very far so be sure to turn it pretty hard.

I’m guessing most peoples questions will initially relate to the front mounted 105mm filter.  Why put the filter on the front like that instead of a sprocket-style drop in ?  It gives you very easy access to the rotating ring that is why.  Another option would be a square polarizer but then you are limited if you want to use a graduated filter simultaneously as you can only orient the filter in 90 degree increments if you want your gradient to be horizontal in the image.  In a lot of cases this isn’t going to be an issue though.  Using the Hitech 105mm Threaded Ring“>front mounted 105mm filter adapter I wasn’t able to configure the setup in a way without vignetting wider than about 28mm on a full frame camera (my 5d Mark 3).  This was using what Hitech call their standard 77mm adapter ring.  They also offer a wide angle adapter ring but unfortunately several requests to Hitech for clarification on whether this would remove the vignetting up to 16mm has yet to yield an answer.  If they respond then I will update this article and if anyone from Hitech is reading this, please feel free to comment below as we’d all love to know. Removing the 105mm adapter and putting two stages in the holder I found that vignetting began in the 24mm area.  I would suggest that for most people you are going to want to default to trying the wide angle adapter, in fact I don’t really understand why these companies even make a ‘standard’ adapter in the first place as we all want LESS vignetting.  Lee are guilty of the same thing. 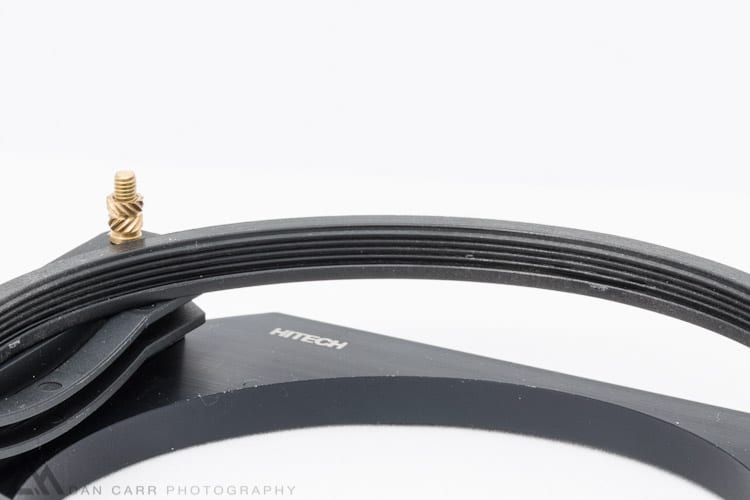 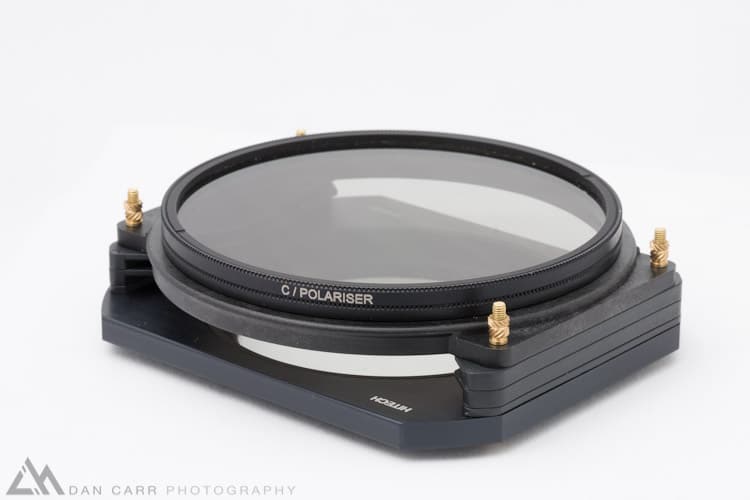 Overall I liked this holder quite a lot, it feels solid enough that it will stand the rigors of being tossed into the bag of a trekking landscape photographer but light enough that you won’t notice it is there and easily to dismantle for travel.  In design its closest rival is the Lee holder but the Hitech seems just as good, and a little more solid.  My main issue comes with the plastic 105mm adapter on the front though which feels poor compared to the rest of the holder.  Couple that with the ease of vignetting with that setup and I can’t say I recommend that solution immediately for polarization. This kit HERE comes without the 105mm adapter anyway so my advice would be to get it and first try life with a 4×4 Lee polarizer. If you really feel you are limited with the rotation available relative to your graduated filter then at that point consider trying the 105mm adapter. The polarizer itself is  nice and sharp and pretty neutral in color.

In looking for the Hitech products on the B&H website I was swamped in a plethora of options and variations of Hitech gear.  It was very confusing!  To help you out, the links in the widget below will point you to exactly the right products that I’m talking about.