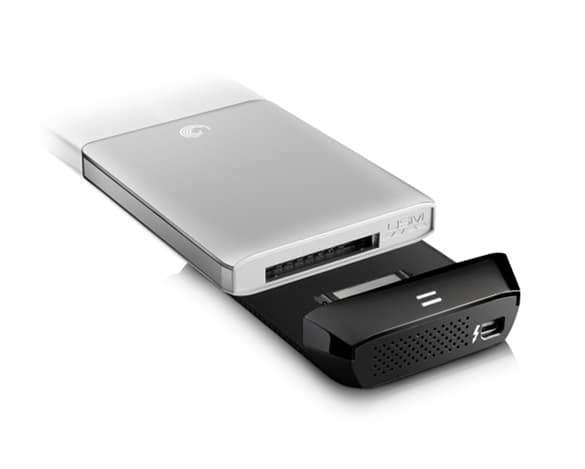 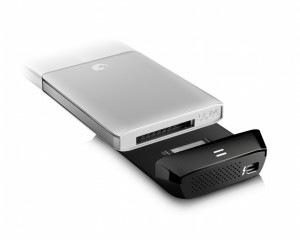 On a recent trip to Europe I underestimated the amount of drive space I would need to take with me.  I was forced to go to the nearest computer store and purchase another drive.  If I was going to have to do this I wanted to make sure that I picked up something that would at least be useful in the long term.  I use a Macbook Air when I travel and I hadn’t yet purchased any Thunderbolt drives to go with it.  At the time of writing (June 2012) Thunderbolt drives are still few and far between and those that do exist are bulky, externally powered ones with highly expensive SSDs in many of them.  If I’m traveling I certainly don’t want to have to carry another power supply with me so many of those are out of the question. After some research I soon discovered that currently, the only bus powered Thunderbolt device out there is the Seagate GoFlex drives.  My local store only had the USB3 version but the design of the GoFlex drives is such that you simply purchase adapters to clip onto the back of them to change the ports.  In fact, buying the USB3 version is great because then I can buy the Thunderbolt adapter and I’m left with a drive that can be used in both USB3 or Thunderbolt.  Given that the Macbook Air only has one Thunderbolt port this could be very useful if I need to use the drive, but something else is occupying the Thunderbolt port.

So this is what I did, I grabbed a 1TB USB3 GoFlex in the local store and then when I passed an Apple store a few days later I picked up the Thunderbolt adapter for it.

I ran my usual AJA speed check on the drive with the Thunderbolt interface and was able to produce the following read / write speeds. 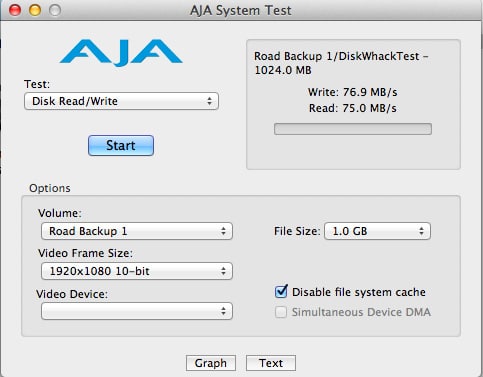 Over USB2 this drive was only producing about a 24MB/s write speed so this is obviously a big increase.  If you had to compare it to Firewire800, which I can’t do directly as I don’t have a FW800 port anymore, I would say from experience that this is roughly 10% faster than that. So if you are currently using FW800 then on it’s own I don’t think you’d want to jump ship to one of these unless you specifically want to make use of Thunderbolt so that you can plug something else into your FW800 port.  A card reader or second hard drive for example.  The compelling benefit though is the flexibility of the design, yes you can also get an FW800 adapter for it.  On the road I could use Thunderbolt and then I could use FW800 with it on my Mac Pro at home.  Of course if Apple would stop screwing around and give us damn USB3 and Thunderbolt on a Mac Pro then that little work around wouldn’t be necessary but that rant is for another day…..

Now remember that at this point, these speeds are really being limited by the speed of the internal drive.  Thunderbolt itself is capable of much faster speeds but to take advantage of that you’ll need to run a much more expensive (and smaller capacity) SSD.  For my purposes at the moment this is good solution to my problem though.  I don’t have one of the new USB3 enabled Macbooks, but given that USB3 is capable of producing faster speeds that this, we should see similar, if not identical times through that interface as well as it too would be limited by the drive speed.  If I do get a new Macbook, which I surely will at some point, then I can just switch this back to USB3 interface and use it in that manner.  I really do like the flexibility this solution has given me and I’m quite glad that I was forced into it by my own stupidity really!

So if you want to finally make use of that Thunderbolt port you’ve been carrying around for a year, and you want a bus powered external drive that will easily fit in your laptop bag then definitely take a look at the GoFlex solution.