New Mac Pros Due Next Week From Apple 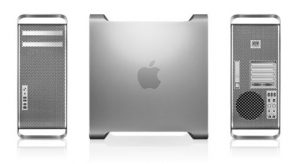 According to the website 9To5Mac , Apple is set to finally update the Mac Pro line next week at the WWDC conference.  That noise you hear ?  That’s the collective sigh of relief from the creative community.  It’s been nearly two years since the introduction of the previous Mac Pro and speculation had been rife that the Mac Pro lineup was simply not profitable enough in Apple’s books.  Many people had already concluded that the line was dead, replaced by new top-end iMacs with Thunderbolt ports.  The previous incarnation of the Mac Pro (which I own) does not have Thunderbolt ports on it, in fact it’s the only Apple computer that does not.  Most people had assumed that the delay was simply Apple waiting for Intel’s new processors but when they came out a couple of months ago and there was no Mac Pro……. people got worried, myself included.

I use a hexcore Mac Pro in my office because I simply can’t stand waiting around for computers to do things while I’m waiting.  One day I’ll be processing hundreds if not thousands of photos, and the next day I might be playing with some 4K video footage from a RED camera.  I’ll also happily pay the price premium over an iMac for the simple reason that I like to have 4 drive bays.  I often find it useful to use multiple internal drives, for example currently I have an internal drive dedicated to Time Machine and one with Boot Camp on to run Windows.  Then I have a fourth drive that I use as a scratch disk for programs like Photoshop.

Whilst we don’t know detailed specs of the new machines, they will of course have Thunderbolt and finally USB3.  I wouldn’t be surprised to see Firewire 800 go the way of the DoDo , so hopefully we will see 2 Thunderbolt ports on the front of the machine, and 2 or 3 on the back.  There’s also the possibility that we will see a slightly different form factor that fits easily into a rack mounting system.  Mac Pros could then be used to replace the now discontinues XServe.

I’m just about to embark on a month long trip to Europe but as soon as I return I shall be ordering one of these new machines, so long as Apple don’t pull any weird stunts with the pricing or specifications.  I can’t wait to have a Thunderbolt storage system and simple access to things like USB3 memory card readers.