Recently Canon announced the introduction of three new lenses to their EF lineup.  The long awaited 24-70 f2.8 L II finally broke cover as well as two wide prime lenses with IS, the first of their kind.  Much has been made about the projected $2300 price point for the new 24-70 though which is about $1200 more than you can currently get the previous version for.  In the last couple of years Canon have updated some old lenses and introduced some new ones, all of which I have found to be exemplary so my gut feeling is that for pros, the price point will be justified.  I was never that enamored with the wide open quality of the MKI version of this lens, it’s one of the few L series lenses that I have never owned so the prospect of a higher quality version is something I have looked forward to for some time.

Canon also showed the ‘first ever’ wide angle primes with IS, a 24mm f2.8 IS and a 28mm f2.8 IS.  I have to say this came of something of a surprise to and initially I wasn’t quite sure what I’d use these for but more on that in a minute as things become a little clearer when you have it in your hand.

Unusually I was able to get my hands briefly on all three of these new lenses within a few days of their announcement.  Of course the first one I looked at was the 24-70.  Physically there have been some changes to the lens and it comes in noticeably lighter.  The weight difference is 150g , roughly 16% lighter but if you’d told me it was 25% lighter I would have believed you, perhaps something to do with the distribution of the weight.  Mounted to my 5dMKII it felt like a perfectly balanced package.  Another physical difference is the 82mm thread on the front element, up from 77mm on the previous version.  I remember the change from the old 16-35 f2.8  to the 16-35 f2.8 II which went through the same increase in diameter.  The end of the MKII 16-35 appeared a fair bit larger than its predecessor, with a bulge in the lens casing.  I’m happy to say though the the 24-70 doesn’t suffer from this at all.  I was worried it would seem a lot bulkier but actually it feels quite svelte and apart from the annoyance of all your 77mm filters no longer fitting, it’s a change that will go unnoticed by most. 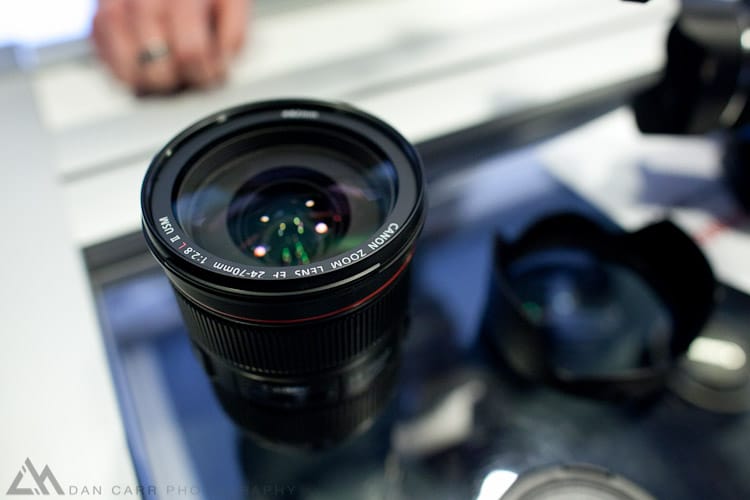 A quick note on lens hoods

All of Canon’s new lenses since the introduction of the 70-200 f2.8 L IS II have featured a release/lock button on the lens hood which is very nice.  The 24-70 f2.8 L II continues this trend AND so do the 24mm f2.8 IS and the 28mm f2.8 IS which I believe are the first non-L lenses to have the feature.  A Canon representative told me this will be on all lenses moving forwards.

Right back to the lens…… Obviously begin and L lens and priced at more than $2000 you get all the build quality you would imagine/ hope for. In this area there is really nothing much to report on as it’s simply as good as it gets.  Nice resistance to the focus ring and smooth motion on the extension of the lens during the zoom.  Thankfully they didn’t reverse the focus and zoom rings like they did with the 70-300 L IS !

The lens was marked with serial number 00000036 and I was told that it was a hand assembled prototype therefore no real judgement should be made of its images.  Unfortunately I was also confined to a small and very dark room while I examined it so it really was tough.  What I am seeing though is a lens that looks to be damn sharp when wide open which is the only way I tested it.  This was the floor in the previous version and also the low light in the location meant I needed that f2.8.  Take a look at the image below and the 100% crop from its focus point.  This image has no additional sharpening added to it in Lightroom and no noise reduction applied.  And before you ask…. it was shot on my 5d MKII! 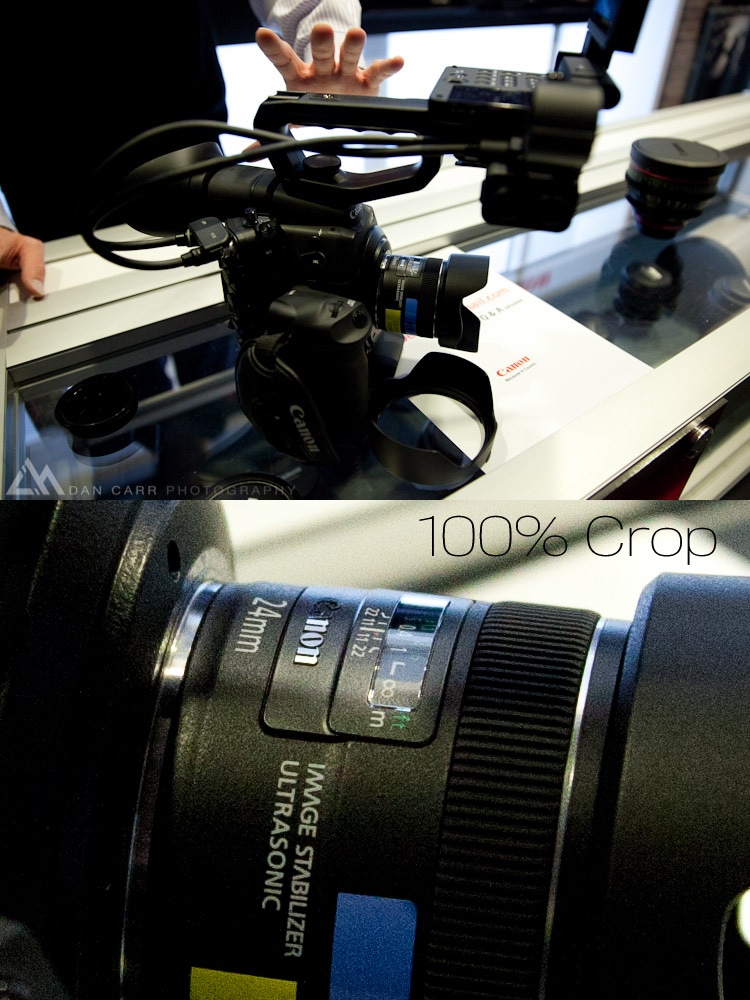 There is two things you can see from this image, two things I am very glad to see.  Firstly for a zoom lens wide open at f2.8 this is SHARP!!  Secondly there appears to be essentially no chromatic aberration even in the high contrast black on bright white areas.  This was the same on all the images that I took and clearly this is something they have worked very hard to eliminate with this lens.

Despite its high price I expect that this lens will be in huge demand once it’s launched.  I’d advise getting in line with a pre-order at one of the following vendors. 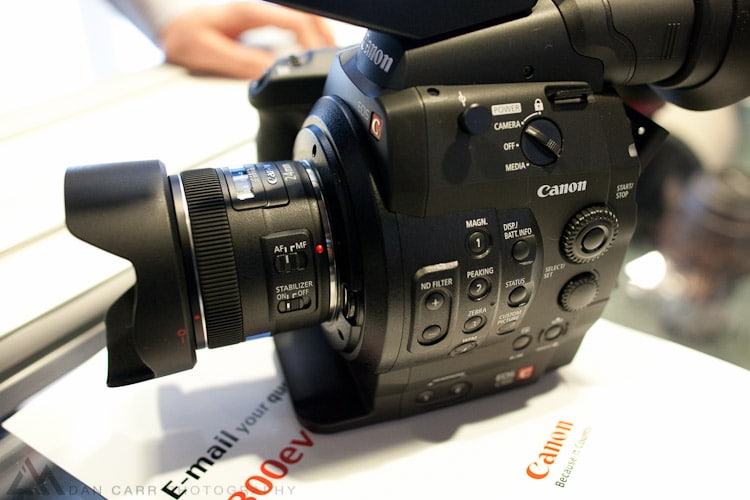 When these lenses were announced I wasn’t quite sure about them, it seemed to be a bit of an oddity.  Having handled them now though , a couple of excellent uses spring immediately to mind.  The first use is shown above, though the camera doesn’t need to be a C300, any video shooting DSLR will do.  IS is extremely beneficial to hand held video recording and whilst many people love to make out of focus shallow DOF videos the reality is that keeping a subject in focus at faster apertures than f2.8 is VERY hard indeed.  Especially if you are using still lenses instead of cine lenses.  An f2.8 prime with IS makes a lot of sense in this regard. 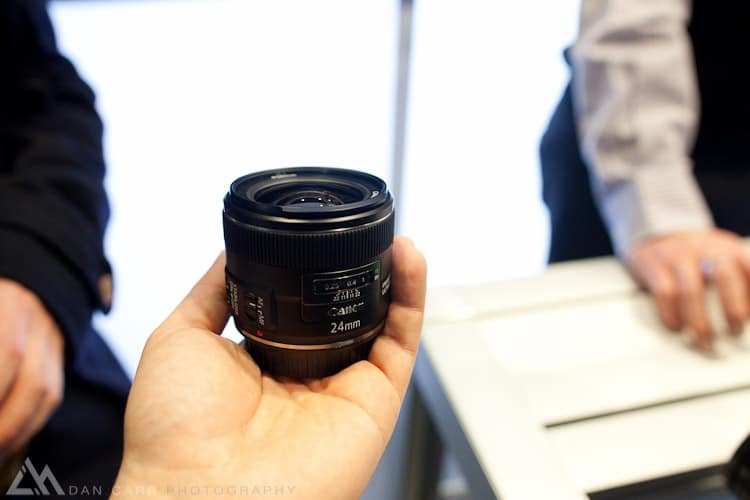 As you can see from the photo above, these are small lenses and also very lightweight.  They don’t have the build of an L series lens but they feel solid enough which is a good thing as they plan to sell them for $800 and $850.  I don’t think people will feel short changed though when they have a play with these lenses.  I often gravitate to my 24mm f1.4 II as my everyday lens, I used it to take the photos above for example.  But this is a big lens and I’ve often wished for something smaller, especially when I travel on vacation.  The diminutive size makes it a wonderful companion for everyday travel usage.  I’m not sure which I would choose though ?  24mm or 28mm?  It’s a bit strange to me that they introduced two lenses so close together.  Why not a 24mmm and a 35mm ?  Then people might even buy both ! 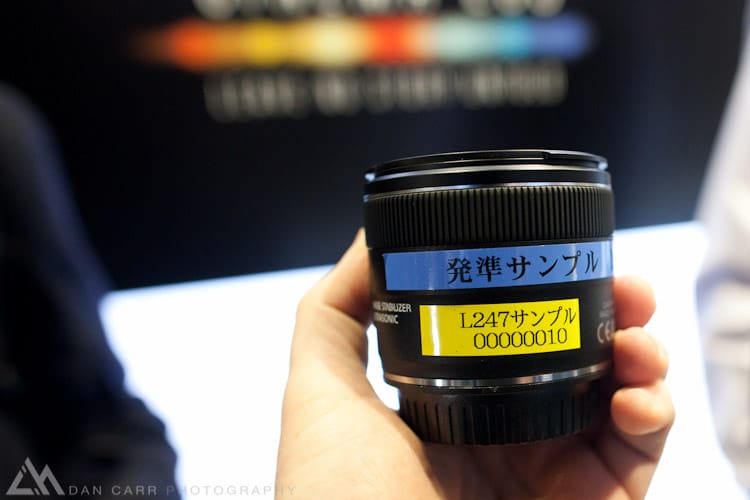 Again these were prototype lenses and unfortunately the IS was not operational in them so I was unable to test that. 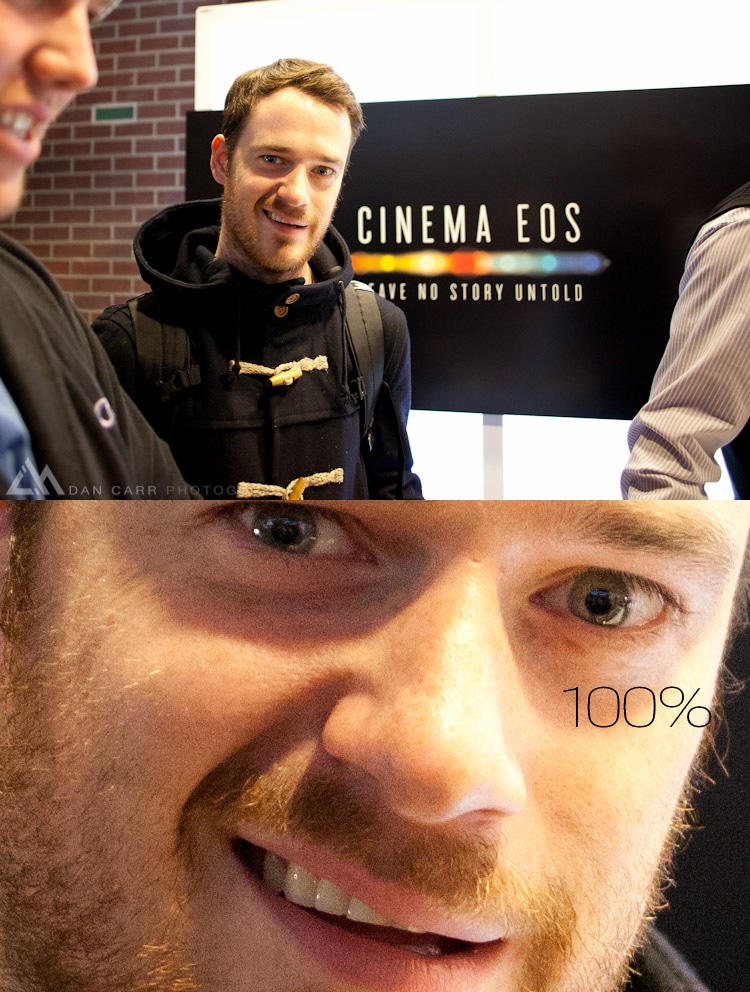 Again I only had a brief try with the lens and I opened it wide up to f2.8.  The result looks to be pretty good to me!  I wouldn’t hesitate to use something that is that sharp for my work and to have it in such a tiny package is pretty remarkable.  When you take into account that this image was shot at iso2500 as well then I expect it to produce some beautiful results in brighter conditions and of course when stopped down.  If you can get 2 stops of extra hand hold-ability from the IS then you should be able to shoot in a light situation similar to shooting with an f1.4 lens!  The more I think about it the more I think the 28mm version might just find a place in my bag this year…..

Wide open I definitely saw some cyan colored chromatic aberrations against the whites but it certainly wasn’t anything to worry about and not even as bad as some L lenses I have used in the past.  Given its minimal nature I expect it would be gone by the time you’ve stopped down only a small amount. 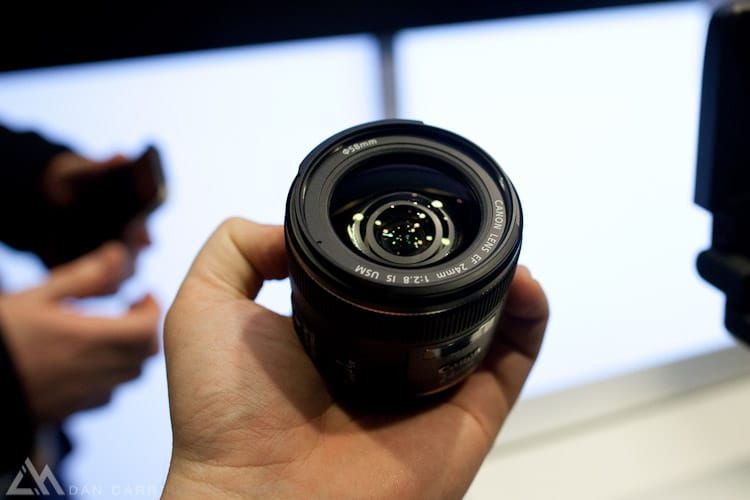 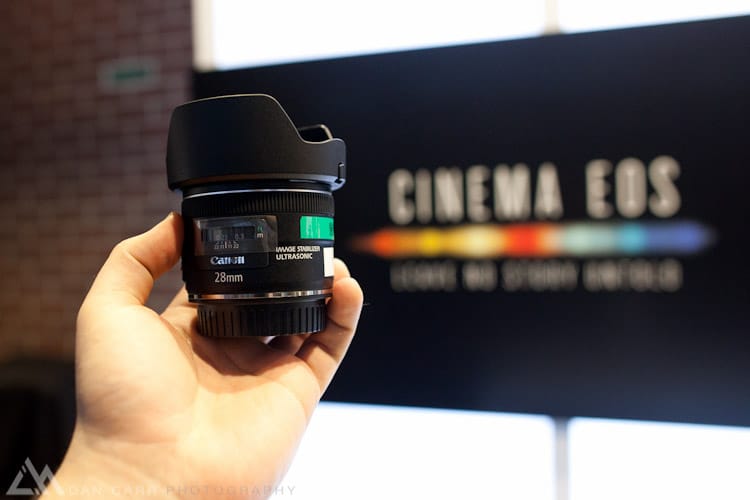 The 28mm version. Note the release button on the lens hood. 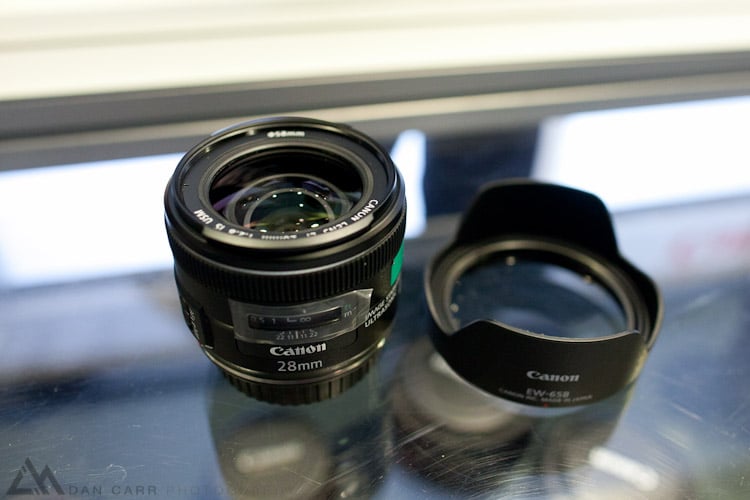 Still has the plastic cover on it! Fresh from the prototyping lab.

Pre-order the IS primes

You can pre-order these two new primes from your favorites stores with the links below.