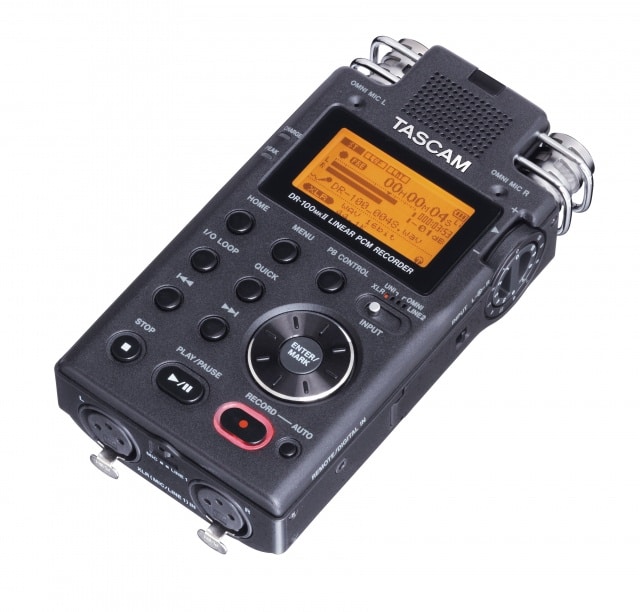 Getting around the deficient audio in DSLR video production is always a tricky problem for one reason or another.  There are several ways to do it , depending on which camera you are using but it also depends on whether you want to shoot separate audio tracks and sync in post using Plural Eyes , or whether you want to record straight into the video track on camera.  The latter route will never be as high quality but sometimes you just don’t have time for the extra step in post of syncing and managing the audio files.  Of course the first step to better audio is just to use better microphones and those all have XLR outputs on them so you need a way of connecting XLR’s to your camera.  A popular solution has been the ZOOM H4N and it’s been good at that price point though it was never really designed for this use.  The H4N is several years old now, predating the so-called DSLR revolution in fact, and was designed to record music, both live and at line level through 1/4″ plugs from guitars.  One of the problems with it is the sensitivity of the 1/4″ line in signal is not at a typical line in level so inline pads are required as well as xlr-1/4″ TRS conversion of you want to record a line level signal and bypass the pre amps in the H4N.  For me, no line level XLR input on the H4N is a big shortcoming for the flexibility of it’s usage.

The Tascam DR-100 was also used by quite a few people instead of the H4N but the original version also lacked the line level input that I would like to see.  Tascam has just recently started to ship two new recorders though that BOTH feature mic and line level XLR inputs.  The updated MKII version of the DR-100 and the brand new DR-40 which now takes over from the H4N as the most affordable XLR recorder on the market at around $200.  Let’s take a look at their main features: 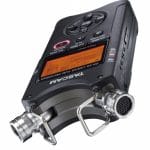 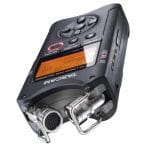 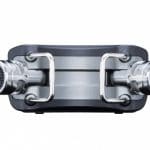 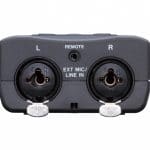 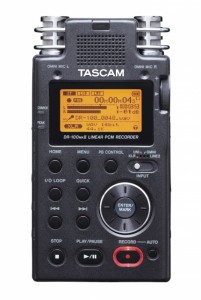 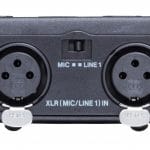 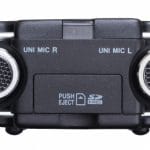 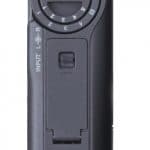 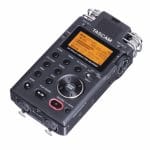 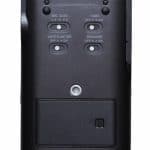 So What’s The Difference ?

The recording functions of both units are very very similar but the DR-100MKII has a lot more physical buttons.  The DR-40 on the other hand is very menu driven.  Buttons cost money !  So the DR-40 had to loose a few in order to come in at a $200 price point whereas the DR-100 MKII is $330.  The physical gain dials on the side of the DR-100 in particular are a very nice addition.  Another big difference is that the XLR input levels of the DR-40 are linked together whereas the DR-100’s can be adjusted independently.  This is the most important difference to be aware of in my opinion !  If you are plugging two different microphones into a DR-40 , they will have to be at the exact same level.  They can be increased and decreased, but only by the same amounts.  If you intent to run an external mixer into the DR-40 then no problem but if you want to mix 2 mics together then the DR-100 is going to be a better bet for you.  The DR-40 also has position changeable mics as you can see from the images.  They can be flipped inwards for a tighter field or outwards to capture more ambient from a scene.  This is a really nice feature to have if you intend to just use he on board mics.

A lot of people have taken to running the line out from a recorder into the mic input of a DSLR to provide a scratch track for syncing, or just for a faster solution in general.  On a Zoom H4N this is possible by using a -25db pad cable to get the line level back down to a mic level input on a DSLR.  For a Tascam recorder you need a -35db pad cable .  The problem has been though that you loose the headphone jack for monitoring with the H4N and the same is to be said for the DR-40 as it only has a headphone jack as a line out.  Some manufacturers are selling -25db pads with a headphone splitter for the H4N but I haven’t seen a -35db version for the Tascam yet, though it could be made.  A benefit of the DR-100 MKII though is that it has BOTH a line out AND a headphone socket.  So you can monitor audio and , using the –35db cable send the audio to record directly in camera.

Other differences include a small size and weight difference and the DR-40′s ability to accept 1/4″ TRS plugs within the XLR socket.

Which One To Buy ?

I’ll try and keep this simple for the sake of brevity.  If you are looking for a good, well priced ambient recorder and intent to use the onboard mics the new DR-40 looks to be a winner over both the H4N and the DR-100 MKII.  If you intent to send the audio directly into the camera via the line out then I would take the DR-100 MKII over the other options.  If you intend to use more than one XLR mic then I would take the DR-100MKII with the one caveat being unless you are running an external mixer.

In short, to me the venerable Zoom H4N has been replaced as the go-to digital recorder for those looking to make the first steps to better audio. Aside from the inability to apply separate gain to both XLR inputs, even the cheaper DR-40 seems to be a better proposition.  The price difference between H4N and DR-100 MKII is worth it for having proper XLR line inputs (not just mic level) and also for having more physical buttons and gain dials , plus the extra line out socket.