It’s not very often that Canon announces multiple SLR cameras on the same day, and even rarer that the two place next to each other in the product lineup.  Canon just announced (FEB 2011) the new T3i and T3 DSLRS, also called the 600D and 1100D depending on whether you are in N.America  or Europe.  For the rest of the article I will refer to them using the N.American nomenclature of T3i and T3 but the European models are just the same! 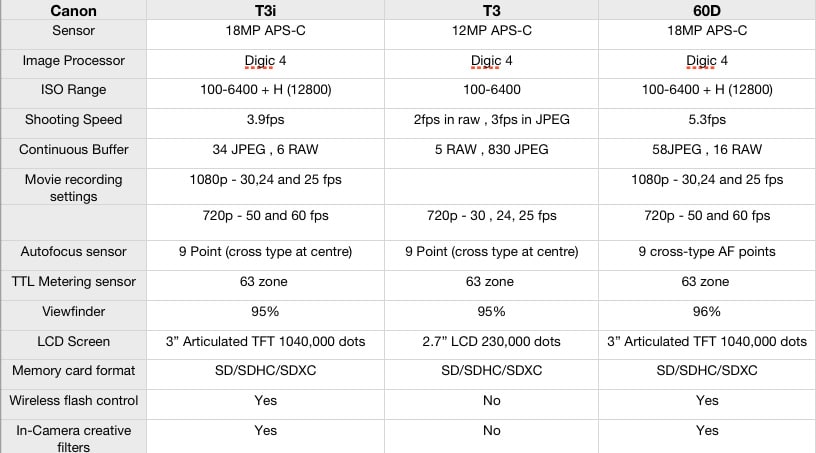 The consumer DSLR market has become incredibly competitive over the last few years especially with Sony flexing their muscles on the scene now and the increasing popularity of the mirrorless interchangeable lens cameras from Olympus, Panasonic, Samsung etc etc.  All this is great news for consumers though as everyone tries to one-up the competition by squeezing a new feature into their new model, or bringing the price point down a notch.  What we see here from Canon are two cameras that use tried and tested features along with a few extra special ones to spice things up a little.  Essentially the T3i is internally the same at the T2i which was launched less than a year ago.  It maintains the same 18Mp sensor and 9 point AF system.  The main changes come from improved ergonomics and a fantastic little vari-angle LCD screen which we have seen on the Canon 60D.  The T3 is a fairly stripped down camera in terms of it’s feature set, but still makes improvements from the T2.

So which one is going to be right for you?

You’ll notice that I also included the Canon 60D on the specs table.  The 60D has been very very popular since it’s launch last Autumn and it’s worth keeping an eye on that one too if you feel the T3i might be the one for you.  The T3 is probably Canon’s most stripped down camera to date.  They really went all out to get to a low price point with this camera and try and tempt people into SLR territory if they are just getting started.  Incredibly they have managed to hit a $599 US price target INCLUDING an 18-55 IS lens!  If money is your main concern and you just want something to take a good clean photo then this is a steal of a deal.  The T3i comes in at a much steeper $900 for the body only so it represents a much bigger commitment to SLR photography , though still something of a good deal for a camera that shoot great photos AND great video ( more on that in a bit).

There’s no doubt the T3 price point was helped by a lesser build.  The shell is plain plastic and feels a little toy-like in your hand.  It doesn’t inspire confidence at all so you’ll have to take good care of it.  The T3i on the other hand is almost as sturdy as the 60D and has increased in weight from the old T2i.  If you are an adventurous shooter and like to travel with your camera I would recommend the T3i for it’s added durability.  If you think you might be getting wet , or snowy , then you might even want to consider the 60D for it’s excellent weather sealing.

The T3 can only shoot 720p videos so they aren’t quite as high resolution as the 1080p ones from the T3i.  Having said that, many people are using the internet for video distribution and sharing these days and you’ll not notice much of a difference if you just upload things to Facebook anyway.  If you just want to shoot the odd family video then the T3 will do an ample job.  If you intend to make fully edited videos , or even professional videos then the T3i will be a better fit with it’s 1080p and also 50 and 60p slow motion settings at 720p.

For me the T3i is such a good deal that I would probably tell 90% of people to go with that one.  The T3 is great if it’s your first SLR and you just want to give it a try as a next step from a point and shoot.  If you’ve had an SLR in the past though, skip the T3 and go straight to the T3i.  If you want to shoot a lot of action and sports then you might want to look at the 60D.  Whilst the T3i does offer almost all the 60Ds features, it doesn’t have such a good autofocus system or such a fast shooting speed.  If action is your thing then ignore the T3 altogether , it really is too slow.  In terms of low light capabilities you can expect the T3i and 60D to be pretty similar , and both will only be slightly better than the T3.  Probably not a feature that is going to make or break any decisions between these cameras.  Even the 12MP sensor size of the T3 is plenty big enough for most people.  18MP is a down-right BIG photo and most people will never take full advantage of it so again I don’t really count this as a discerning feature.  Ergonomically the swivel LCD on the T3i is going to be great for shooting movies and the screen really is beautifully crisp.  The 230,000 dot screen on the T3 is pretty low end spec these days.

It might sound a little negative for the T3 but that’s just because it really is so stripped down to hit that price point.  There’s no doubt that it will take a great photo though, just without all the bells and whistles.

B&H  Photo has the T3i listed

B&H Photo has the T3 listed

AMAZON has both cameras available for pre-order right now: 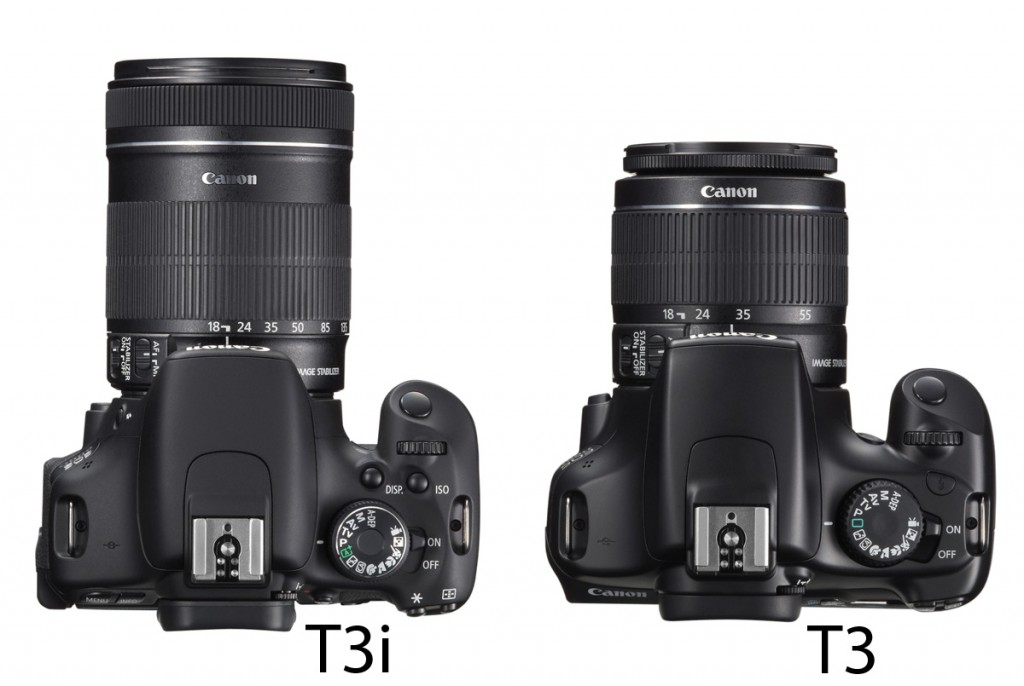