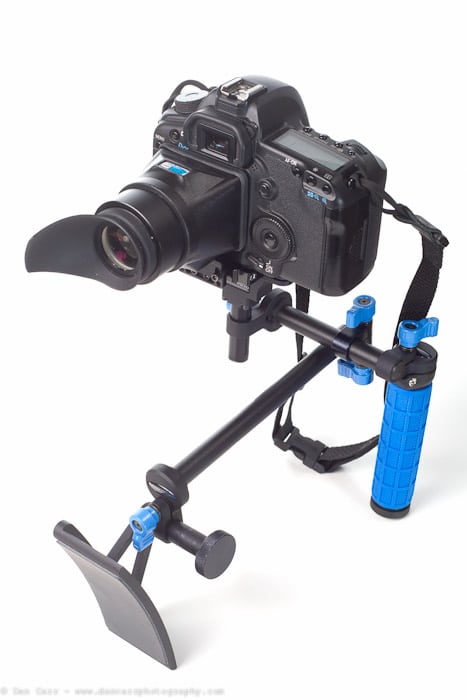 The ergonomic difficulties associated with HDSLR movie making is something we take as a given.  We accept it without much complaint because the end results can be well worth the trouble it takes to put together an HDSLR rig that suits your needs.  Cameras like the Canon 5dMKII and 7d were not intended to be used for pure video production purposes so there are a number of problems that need to be tackled if you are going to produce quality work with them.  The first such problem is a way to view the screen, which I have already touched on with my review of the Letus Hawk Viewfinder, the best VF out there at the moment in my opinion.  The second thing you need to tackle is stability.

People coming from something like a Panasonic HVX, which like most videocameras features built in image stabilization, will quickly see that even the simplest shots on an HDSLR could benefit from a steadier platform.  Tripod shooting is all well and good when the situation calls for it, but many people are looking to HDSLRs for so-called “run and gun” shooting.  Particularly photojournalists who have suddenly found that their editor is requiring them to wear two hats to work.  Photographer AND filmmaker. 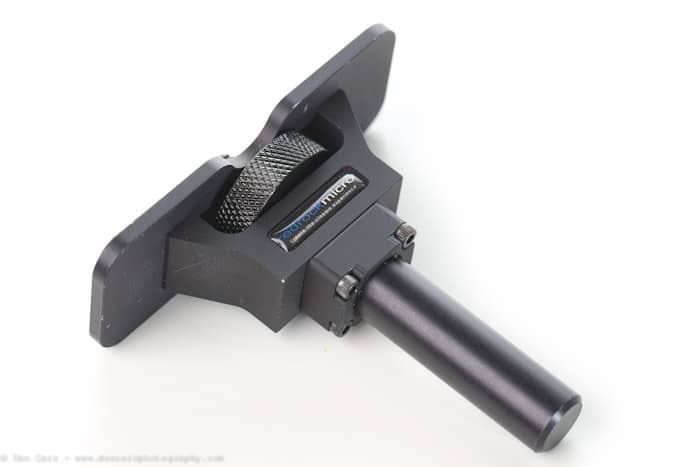 This happens to be the first piece of Redrock Micro gear that I have used and I was immediately impressed by the quality of the parts that go into making the Running Man rig.  I particularly like the soft rubber grip on the handle and the smooth satin finish to the rods.  It look and feels great, though it was a little heavier than I was expecting it to be.  Redrock Micro already has an extensive line of full sized DSLR rigs for those that want to attach matte boxes or a follow focus onto a standard double rod configuration.  The Nano lineup is intended more for those that need a smaller package and would work great for a photojournalist or even a wedding shooter who primarily wants to shoot photos, but also needs a solid rig in their bag to shoot quality video with when the time is right.  There are currently 7 Nano rigs in the lineup but of course you can customize until your hear is content, with the huge range of parts available.  One thing of note is that you CAN still attach a follow focus to your Nano rig by using the Low Down rig and putting the follow focus above the lens instead of the more traditional below-lens configuration. 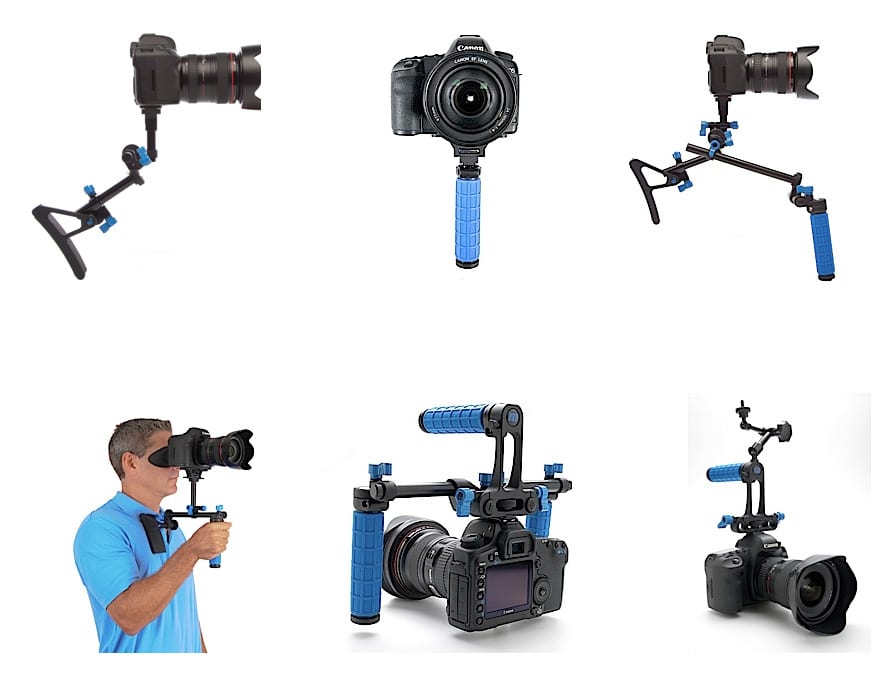 The spring loaded levers on the rig allow you to quickly loosen it to reposition or collapse it into your bag and if you really need to pack it tightly you can break it down into it’s component parts in a little under a minute.  The 8” rod clamp is long enough that you can position the camera far enough away from your body to use the rear screen of the camera without a viewfinder.  In this configuration the 8” rod is more perpendicular to your body.  Adding a viewfinder necessitates bringing the longer rod closer to the vertical to get the eye piece close enough to your eye, but there is still just enough angle on it to use the grip to push into your body with the body pad.  It took a bit of time to find the most comfortable positioning for all the parts, and no doubt everybody will be different.  But once you have them figured out there are few enough pieces that it’s easy enough to remember how you want to have it set up. 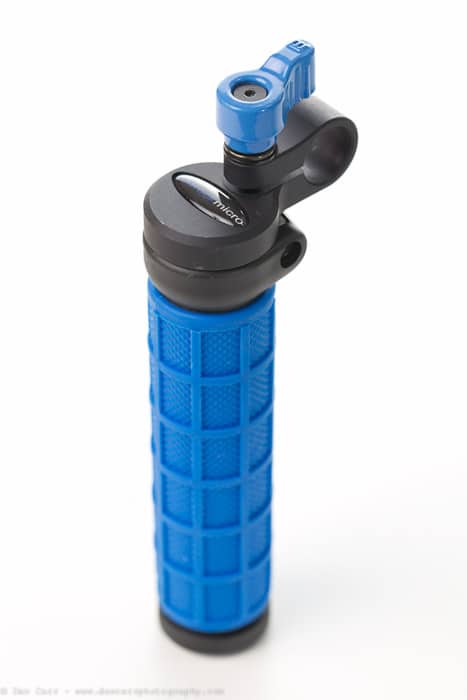 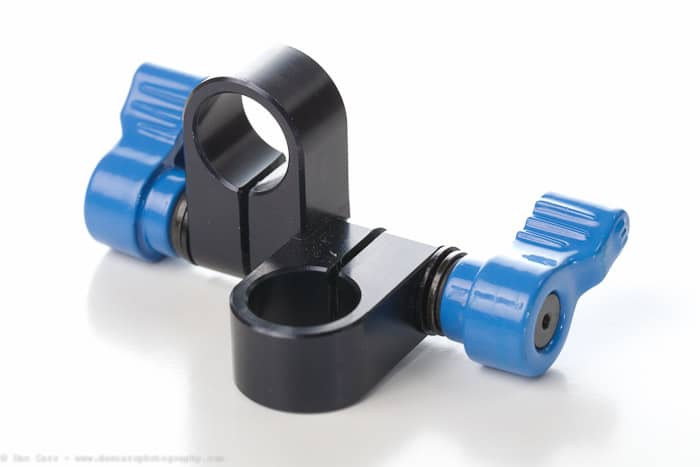 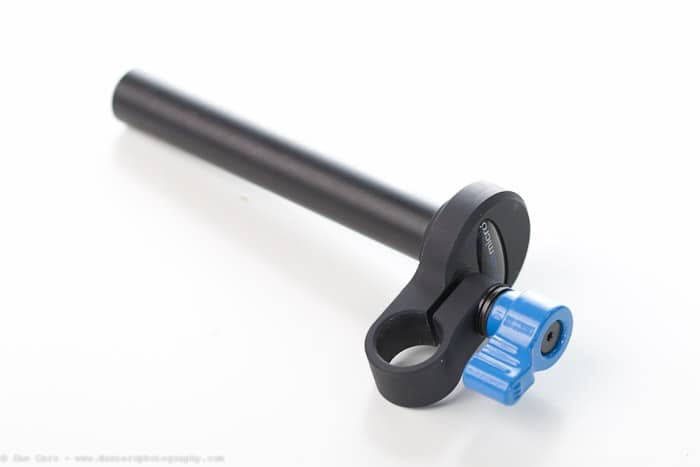 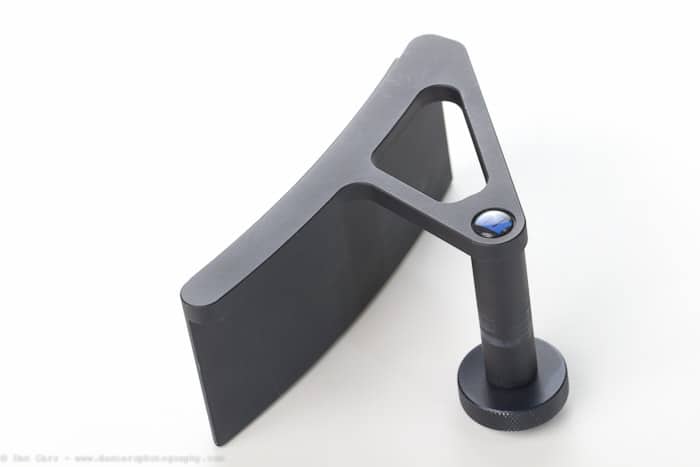 I am right handed but I shoot with my left eye.  This puts me in the minority, more than 60% of people shoot with their right eye and indeed all the Redrock Micro promotional photos show a right-eyed shooter using the rigs.  I experimented with several orientations of the parts to line the viewfinder up with my left eye but in the end the most comfortable was to simply have the body pad bracing against a more central part of my chest, instead of closer to my armpit as is shown by most of the models in Redrock Micro’s photos.  I would like to have have been able to move the camera further to the left on the rig but the 4” rod clamp is too short to allow this to happen.  One solution would be to switch the 4” Grip rod for a plain 6” rod and another microMount and this is possible because all of the component parts (and many more) are available singularly on their website.  Once you have it all set up though the rig does a great job of stabilizing your shot, particularly if you have another point of contact on your face with a viewfinder.  There are no protruding parts while you are shooting and with one hand on the focus ring and one on the rubber grip your elbows fall close to your body meaning you can easily move through a crowd of people with little less mobility than if you only had the camera.  Whilst the blue accents to the Redrock Micro rigs are not exactly stealthy, the size of the Running Man rig is, and if you really want stealth they also make a special camouflaged version(!) or you can buy black microGrips. 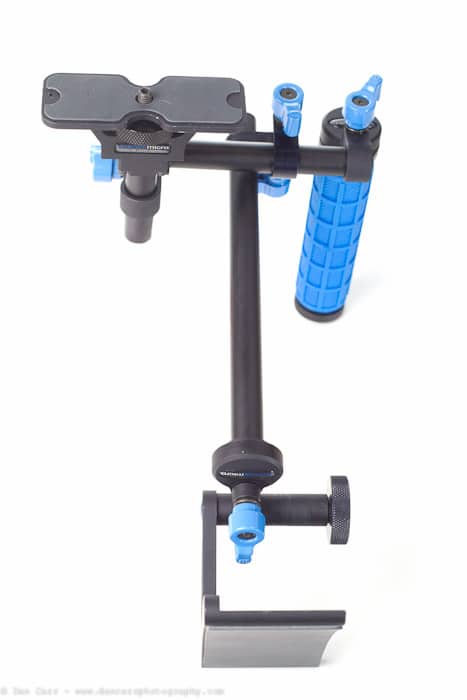 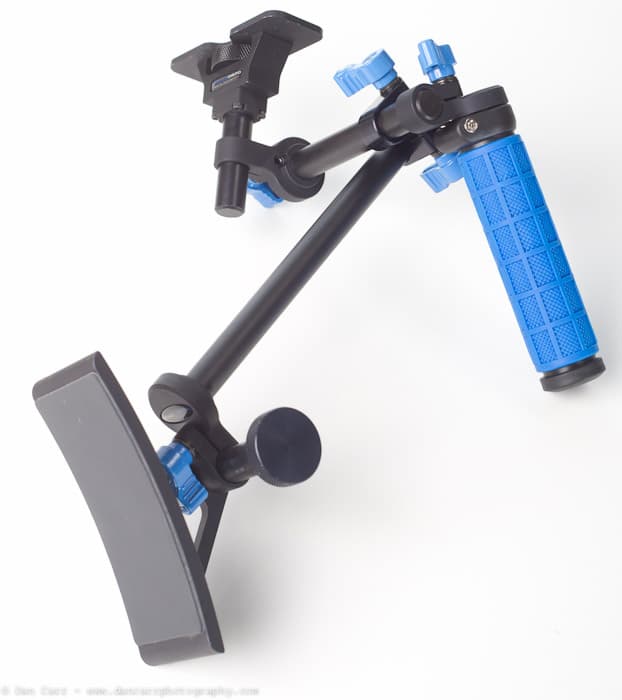 With a viewfinder attached the rig ends up looking a little more like this with the 8″ Grip rod inclined a little more vertically to position the VF over your eye. 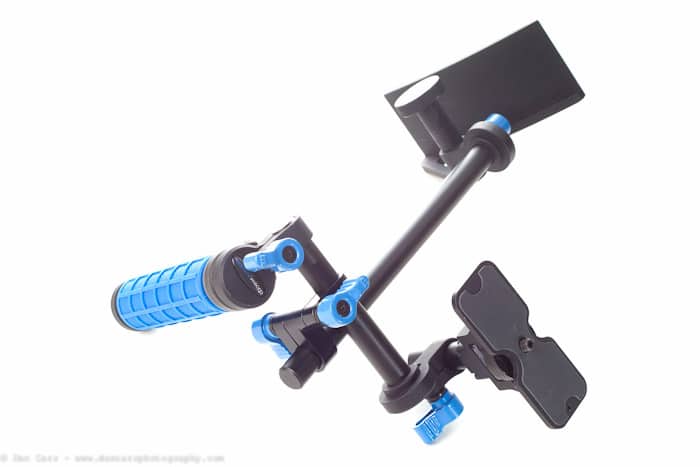 It would have been nice to see a built in quick release system to remove the camera from the Nano baseplate but you can always add a third party QR system.  I highly recommend the ones from Really Right Stuff.  The Nano baseplate does slide off the rig with a quick turn of a lever, but this still leaves the vertical rod protruding from the bottom of your camera and you will quickly see the need for a quick release if you are continually switching from stills to video which is an area where this rig otherwise shines.  Redrock Micro has just released a new component for their dual rod rigs, called the microRSS, which allows you to incorporate a Really Right Stuff Quick Release plate directly into a Redrock system.  Perhaps in the future we might see a Nano version, though it would be fairly easy to simply attach the QR plate onto the Nano baseplate anyway. 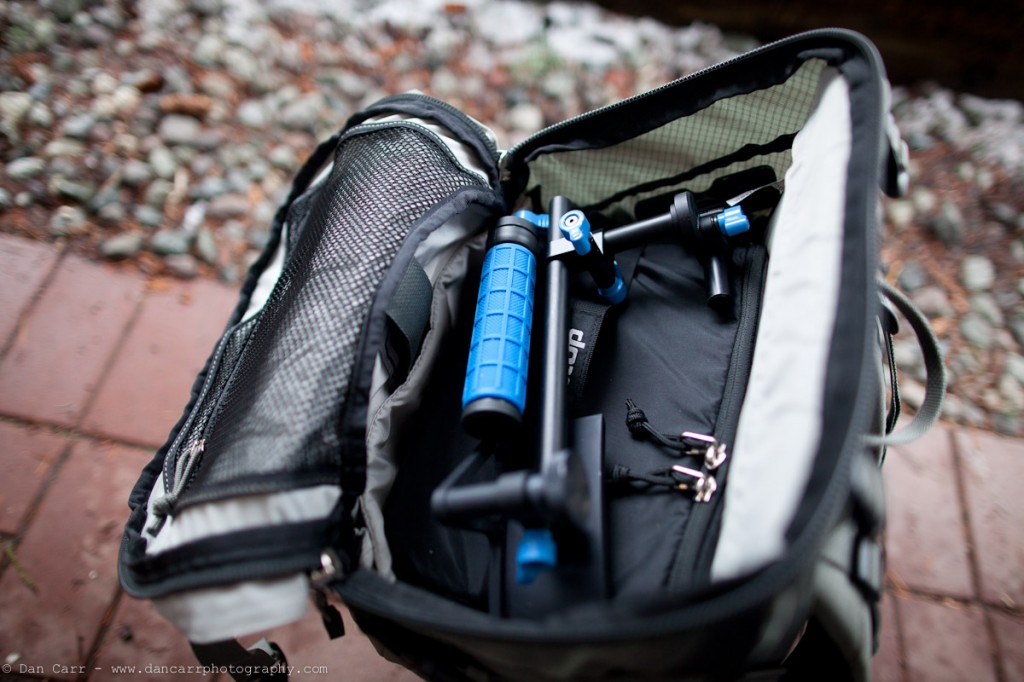 Running Man collapsed flat into the top of my photo pack

Coming at this review as a stills photographer who occasionally shoots videos I likely have different requirements and expectations to someone who is primarily a filmmaker.  I suspect if you are the later, one of Redrock Micro’s other DSLR rigs would be a slightly better choice, unless having a stealthy lightweight rig was your MAIN priority.  On the other hand, if you are like me and tend to shoot a combination of stills and video, this rig provides you with a tremendously more stable platform for very little extra weight and even less bulk in your pack.  As you can see from the picture above, the Running Man rig folds flat by loosening a couple of the levers and easily stows in the top of my photo pack (an F-Stop Tilopa).  Of course all of the parts are interchangeable between the various types of rigs and in this case the only unique part is the Nano baseplate.  If you already have a larger Redrock rig you might even be able to construct this one by simply purchasing the Nano baseplate and then you would have the best of all worlds.  And that woks both ways too if you want to upgrade to something larger in the future you can just add the necessary parts to create your own perfect setup.

I did a little looking around for comparable rigs from other manufacturers.  Zacuto makes a setup called the Striker which is very similar in function, though it sells for twice the price of the Redrock Micro rig.  Being able to brace the rig against your body with the body pad makes a real difference to the stability you can achieve and apart from Zacuto’s Striker, all of the other run and gun rigs from other manufacturers simply went for a 2-hand grip design instead so I’d say the Running Man is right on target with price and function.  Highly recommended!

If you enjoyed reading this review please consider using one of the links below to purchase your gear, it helps me to continue to add to this site.