Panasonic has today launched the new GF2 Micro Four Thirds camera to supersede their popular GF1 model.  The MFT (Micro Four Thirds) standard has been gaining market position quickly over the last couple of years and Panasonic’s cameras have been at the forefront of this popularity boom.  The previous G models (G1, GH1, GF1) were very popular and well received by the press in general.  At Photokina in September Panasonic too the wraps off the new DMC-GH2 and initial reports of that camera have found image quality and autofocus speed to be of excellent quality.  When the original GF1 was announced it surprised a few people by managing to cram nearly all the features of it’s larger brother, the GH1, into a much smaller package. With the GF2 they have achieved much the same thing but with a few key differences.

I don’t always report on all the EVIL style cameras because I don’t always have time, this is not my day job after all….for now at least.  So I pick stories and concentrate on the things that interest me.  These tend to be things that I could see being useful to my photography business.  I only reported very briefly on the GH2 launch because whilst it is much smaller than a DSLR, it is still bulky enough that I consider it to be in roughly the same category.  For me it is not small enough, that I wouldn’t just take my 5dMKII instead.  With the GF2 though we are starting to get into a different area.  The GF2 is roughly speaking the same size at the Leica X1 that I reviewed the other day, or the Olympus EP2 depending of course what lens you fit to it.  At this smaller size I can see it being a great travel camera to have on me all the time.  A step up from a point and shoot, but not quite an SLR and it features the great touchscreen found on the GH2 as well.

Obviously the major physical difference is that the GH2 has a built in electronic viewfinder, whereas the GF2 has an optional one that slots into the hot shoe if you need it.  The main specification difference is the continued use of a 12MP sensor as in the GF1, whereas the GH2 has been bumped to a 16MP sensor.  I’m sure this will annoy some folks but I suspect Panasonic wanted to make a clearer difference between the two models than there was last time round and really, 12MP is plenty for most thing so I wouldn’t worry too much about it. 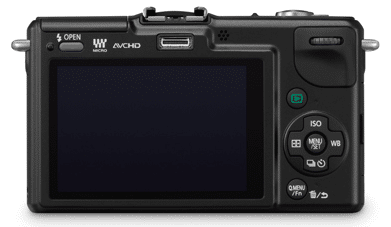 What is clear though is that the GF2 has undergone a fairly considerable diet and come out with 19% less volume than it’s predecessor and 7% less weight.  That’s a decent achievement considering how small the GF1 already way and people are clamoring for smaller lightweight cameras that they can carry unobtrusively around all day, but still maintain the control and quality of an SLR or EVIL.  For me this makes it even more appealing although the main mode dial on top of the camera seems to have been sacrificed to save weight and size.  This means that the shooting mode has to be selected from the touch screen menu which sounds a little fiddly, but at least I tend to leave things in one mode most of the time though I’m sure this will be something to bug a few people.  The camera is now not much bigger than the LX5 and seems to be positioned a bit more towards those looking for an upgrade from a point and shoot, then those who are looking to replace an SLR with something smaller.  The lack of a remote socket means that tripod shooters will want to look at the GH2.

NOW AVAILABLE to pre-order on AMAZON 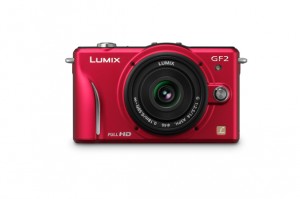 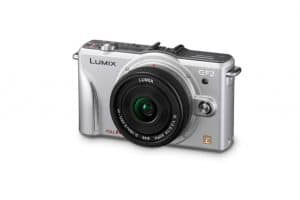 This table compares the features of the old GF1 with both the new GF2 and the GH2: 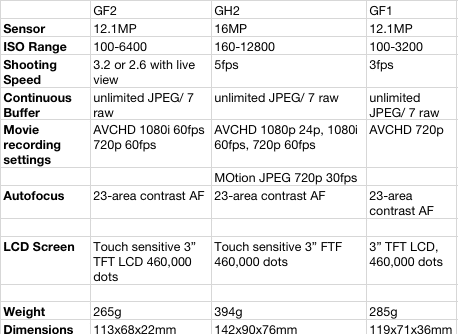 NOW AVAILABLE to pre-order on AMAZON

SECAUCUS, NJ (November 4, 2010) – Panasonic today announced the LUMIX DMC-GF2, the latest of the company’s DSL Micro (DSLM) compact mirrorless cameras, which is Panasonic’s smallest and lightest interchangeable lens system camera – complete with a built-in flash. The LUMIX GF2 is compatible with lenses from the Micro Four Thirds standard, meaning the system is small and compact, while not compromising ease of operation or image quality. Even more, the LUMIX GF2 is compatible with Panasonic’s new 3D interchangeable lens, the LUMIX G 12.5mm / F12, so users can take 3D photos.

“The LUMIX GF2 is key in the Panasonic DSL Micro line-up, as it’s the smallest and lightest model we offer, while still offering superb image quality, which our consumers have come to expect from LUMIX. Compared to the GF1, its predecessor, the GF2 has been reduced approximately 19% in size and approximately 7% in weight yet is still retains its signature built-in flash,” said Darin Pepple, Senior Product Manager, Imaging, Panasonic Consumer Electronics Company. “We expect the LUMIX GF2 to be an attractive model for consumers who want to step up to a more powerful camera that is easy to use, and a camera that is ‘future-proof’ with its 3D capabilities.”

The LUMIX GF2 is extremely easy to operate for consumers at any level, thanks to a newly- designed user interface, which allows for the focus to be set, or shutter released, by simply touching the large 3-inch touch-screen LCD. The touch-screen LCD with a 460,000-dot-resolution makes taking great photos intuitive. Once a user locks on a subject by touch, the LUMIX GF2 tracks the subject with the AF tracking function, even if the subject moves – making it easy to take photos of moving subjects, like children playing. The contrast AF system adopted by the LUMIX DMC-GF2 is not only accurate and easy to use, but also very fast. Users can choose from a wide range of AF (Auto Focus) modes, including multiple-area AF with up to 23 focus areas, 1-area AF with a selectable focus area, Face Detection, and AF Tracking.

The touch operation also dramatically shortens the time spent navigating the menus. With the LUMIX GF2’s newly-designed Touch Q-menu, the user can customize the camera’s shortcuts with the most commonly used settings. Together with the simple button components, including dedicated buttons for video recording and iA (Intelligent Auto) mode which lights in-use, users can operate the camera intuitively with ease.

While achieving breakthroughs in compactness of design and outstanding photo and video quality, the Panasonic LUMIX GF2 can contribute its professional-level imaging performance to well-balanced engine and sensor technologies. For the image processor, the Venus Engine FHD is incorporated, featuring exceptionally high performance signal processing capabilities in both photo and movie recording. With the advanced noise reduction system employing the 3D NR and CNR (Chromatic Noise Reduction), users can capture clear, naturally-balanced images even when shooting at high ISO sensitivity levels to help prevent the color bleeding.

Panasonic’s Venus Engine FHD enables Intelligent Resolution technology, which means that three areas – outlines, detailed texture areas and soft gradation – are automatically detected. Then, the outline parts are enhanced effectively to give edges more clearness while giving a moderate accentuation to the texture areas to look more finely detailed. To the soft gradation part, noise reduction system is applied to make it smoother. Apart from the uniform enhancement of sharpness, the innovative technology Intelligent Resolution precisely performs signal processing pixel by pixel, resulting in images that are naturally clear and crisp in both video and photos. The 12.1-megapixel Live MOS sensor featured in the LUMIX GF2 offers the best of both worlds – the superb image quality of a CCD sensor, plus the lower power consumption of a CMOS sensor.

All of Panasonic’s LUMIX G-Series DSLM cameras are equipped with the highly-efficient Dust Reduction System.  If dust gets inside the camera when the user changes lenses, it could cling to the image sensor and show up as a spot in photos. The Dust Reduction System helps to reduce this risk by placing a supersonic wave filter in front of the Live MOS sensor. Vibrating vertically around 50,000 times per second, the filter repels dust and other particles.

The Panasonic LUMIX GF2 is artistic not only in form, but also in function, as it provides an array of features that lets users capture true-to-life images while also creating their own expressive, beautiful images. The LUMIX GF2 features My Color mode which is integrated with the conventional Film mode. My Color mode offers a total of eight preset effects — Expressive, Retro, Pure, Elegant, Cinema, Monochrome, Dynamic Art, Silhouette, plus Custom mode, which lets users manually set the color, brightness, saturation and contrast levels. Also, with the Full-time Live View function, users can see how these settings will affect the images before they shoot, which makes it easier to capture the exact effect desired. The LUMIX GF2 has 17 Scene modes, most which can be used during video shooting, too.  The exposure meter can be displayed in the P/A/S/M shooting modes for entry-level users to visually learn the correlation between shutter speed and aperture to enhance their photography skills.

The Panasonic LUMIX DMC-GF2, with a quality and solid aluminum body, will be available in black, silver, white, and red models with the following kit options: DMC-GF2C – 14mm F2.5 Lens Kit and DMC-GF2K – 14-42mm Zoom Lens Kit.  The LUMIX GF2 will be available in January 2011 and pricing will be announced approximately 30 days prior to shipment.