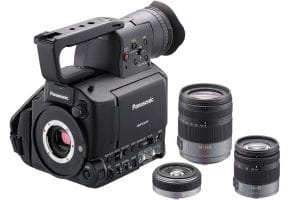 Panasonic launched the AG-AF105 Four Thirds video camera today in Japan.  Originally the camera was show as a prototype at NAB.  What we do know is that it is coming in December . Pricing was initially rumored to be about $10,000 but now it seems that it could be as little as half that.  I will update when more info is available.

Confusingly it seems in Japan it will be called the AF105 , in Europe the AF101 and in N.America the AF100.