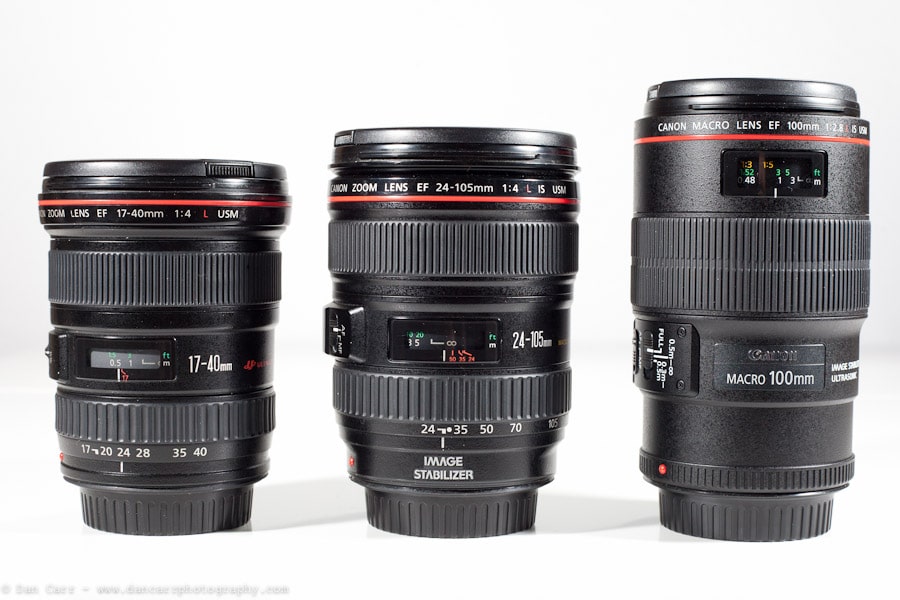 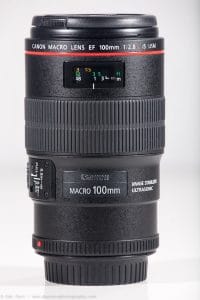 Canon launched the brand new 100mm f2.8 L Macro in September 2009.  It’s not very often that Canon launches an entirely new lens, most being updates to already existing designs, so this was one that I wanted to check out as soon as I heard about it.  There was already a 100mm macro lens but it was not part of the famed Canon L lineup, so what is different in the design of this version to justify inclusion in the L category?

The major feature of this lens is the first implementation of Canon’s new Hybrid-IS system.  Canon first released information on this system a few months before the release of the lens and the important detail of the system is that not only does it compensate for angular shake like the old IS system, it also compensates for linear shift shake as they call it.  This is basically vertical movement of the camera parallel to the focal plane.  For macro shooting, movement in this direction is particularly noticeable in photos if you are not using any kind of camera support.  A new acceleration sensor not found in previous IS lenses detects the amount of vertical shift and combines this (via some mathematical trickery) with the information from the angular sensor that has always been present in previous stabilized lenses. Putting the lens to the test for the first time you can immediately hear the Hybrid-IS system working very hard.  If you make slow deliberate movements vertically you will instantly hear it ramp up and try to counteract it. 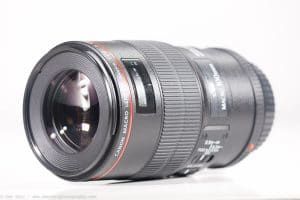 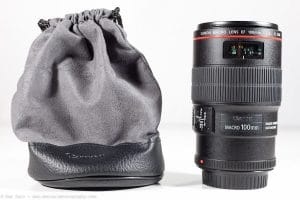 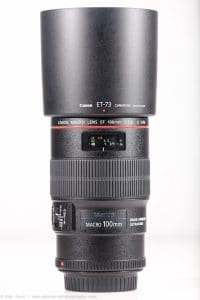 The lens also features a new type of construction for Canon.  The focus ring and lens mount are made from aluminum but the rest of the lens is made from a high grade “Engineering Plastic”.  It has a very solid feel to it but it surprises with its light weight when you first pick it up.  It’s not a big lens by any means but if you are used to very dense feeling L lenses then you will find that this one feels significantly different.  The plastic body also has an attractive dappled texture on it which is continued onto the lens hood.  After a month of use the plastic seems to offer a good resistance to scratches and in particular the newly textured lens hood is a great improvement over the easily scratched glossy hoods on most of the other short L lenses.  The lens only weighs 625g which although 25g heavier than the regular 100mm macro, is still a relative lightweight.  With a 67mm filter thread its also on the slimmer side of things too so I found that I could always comfortably find a spot for it in my bag.

The following images are 100% crops from my trusty $5 bill test chart. 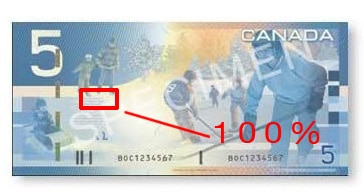 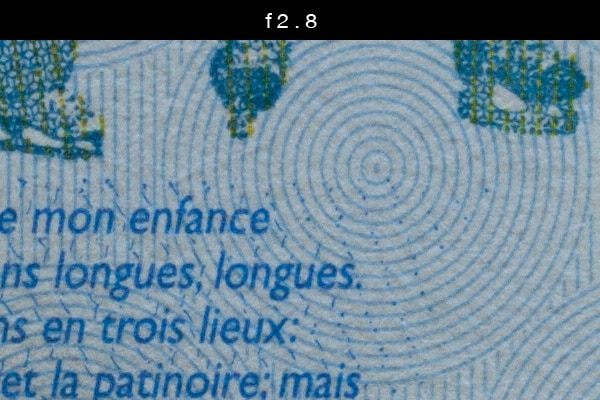 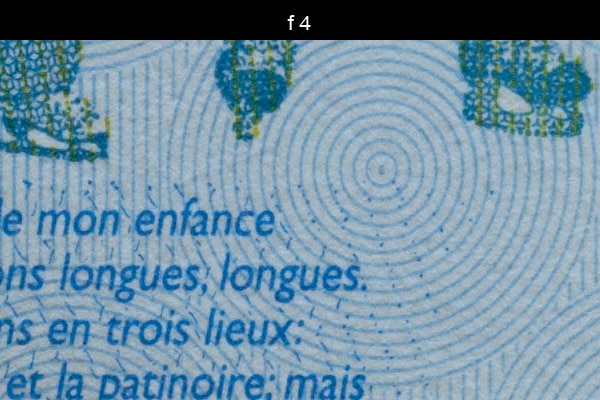 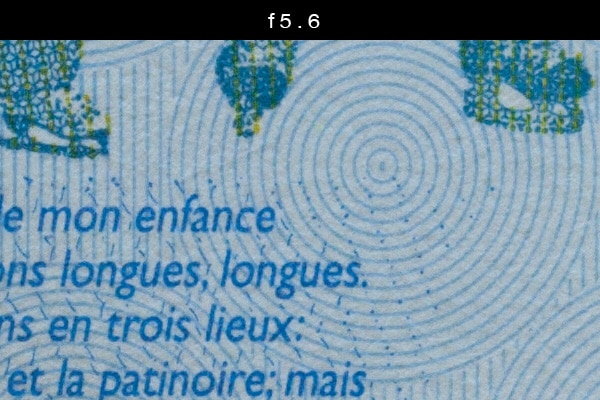 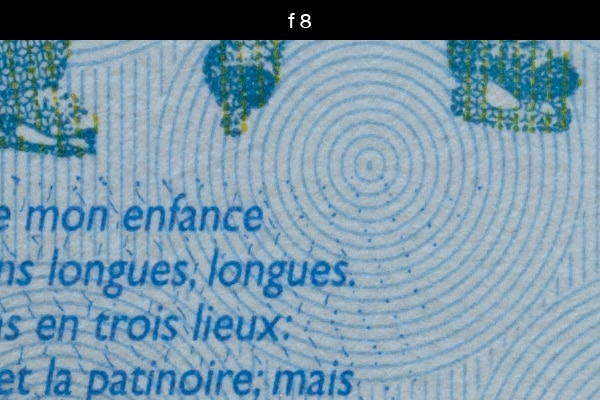 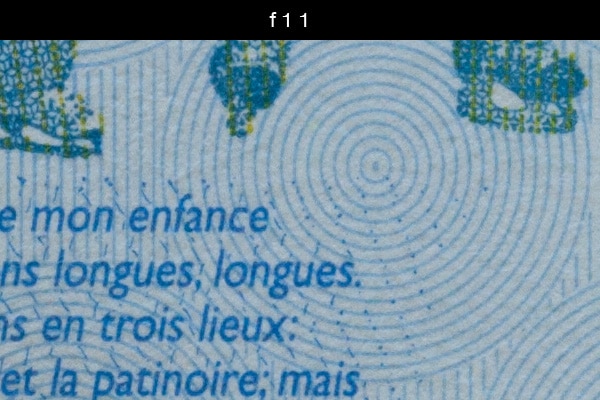 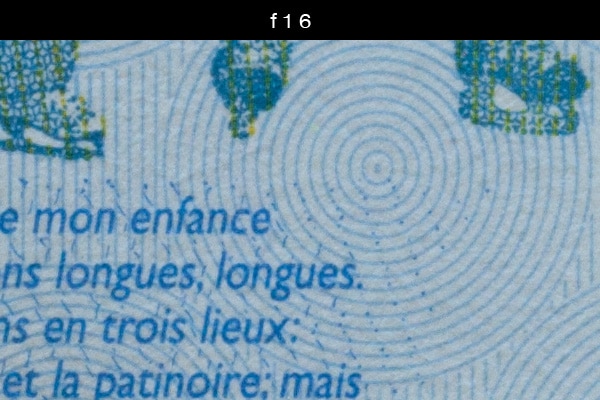 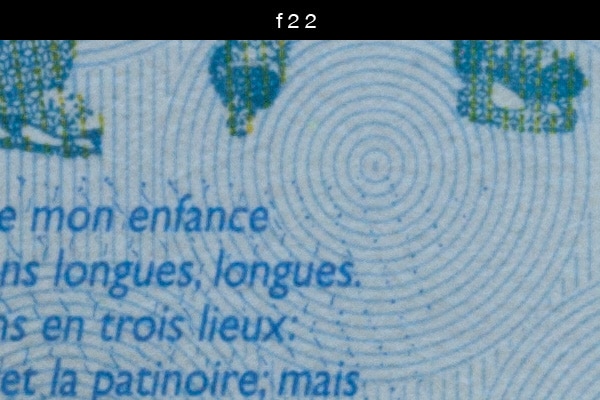 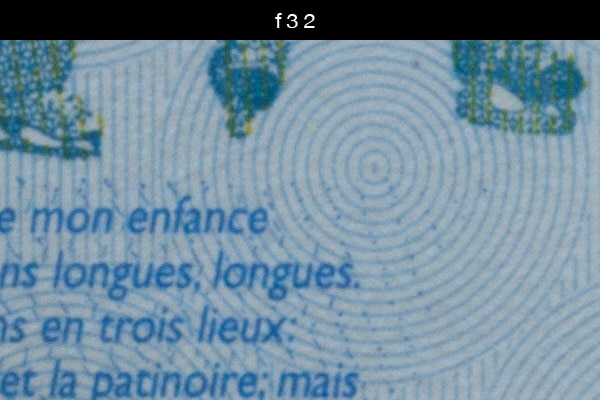 So what are we seeing here ?  You could be forgiven for thinking that I have simply uploaded several of the same images here but I assure you these are labeled correctly.  Simply put, this is the sharpest lens I have ever seen wide open at f2.8.  In fact there is basically no difference in the sharpness of this lens from f2.8 up to f8. Above this point there is a small degradation down to f22 and then a slightly bigger drop to f32.  In fact the combination of Canon 5dMKII and Canon 100mm f2.8 L Macro has reproduced such an enormous amount of detail from this $5 bill that it has almost made my test subject redundant.  After using the lens for a few weeks I had an idea that it was pretty sharp wide open but I still did not expect results like this.  Even the legendary 300mm f2.8 L IS shows a greater difference in wide open images than this lens!  For a lens that is selling for less than $1000 it really is quite remarkable.  Another important thing you can see in this test is that softness caused by diffraction does not have any great effect until beyond f16 and is still very good at f22. This is especially important for a macro lens because when shooting close up subject you often need to stop the lens down much more than normal to get great enough depth of field on your subjects.  F16 to f22 is much more common in macro photography. 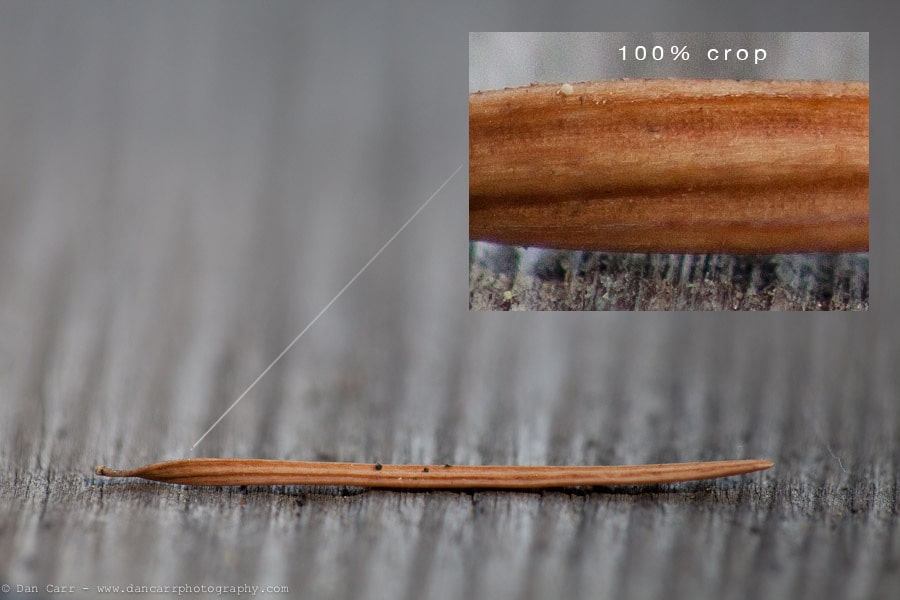 As you can see, color and contrast from the lens are nicely reproduced and the bokeh (out of focus area) is beautifully smooth.

The same are of the $5 was then moved to the corner of the frame and the test repeated.  For brevity I am not going to include all shots up to f32.  The first half should give you enough of a clue as to the relative corner sharpness compared to the center. 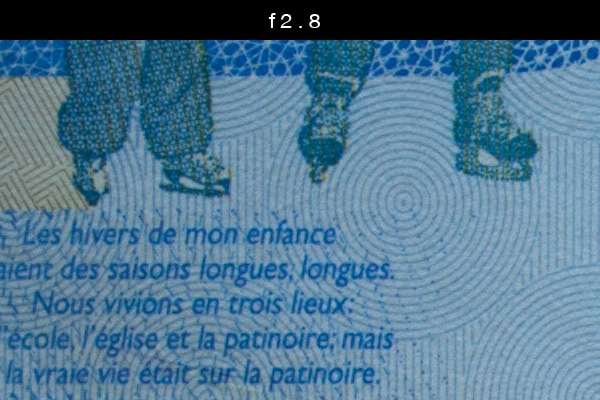 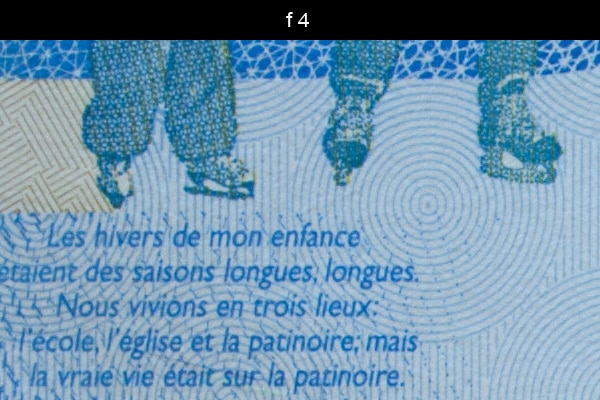 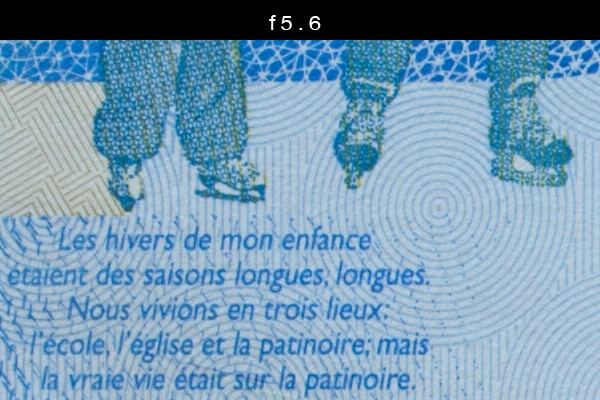 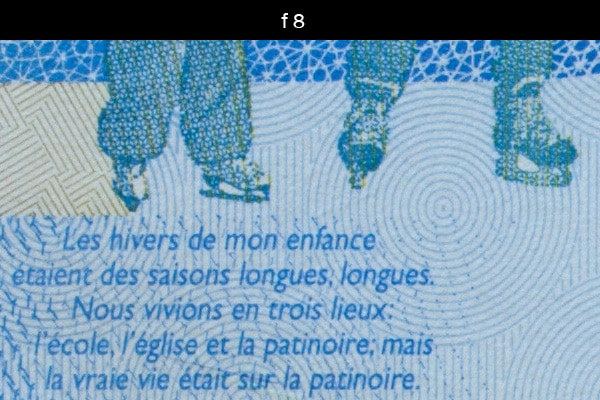 From a sharpness point of view there are no complaint from the corners.  Not quite as sharp as the center but still up there with the sharpest most detailed images I have ever seen.  What is disappointing though is the huge amount of vignetting at f2.8.  Vignetting is minimal at f4 and almost gone by f5.6 but the f2.8 result is a real shame. It seems to vignette a lot more than many of my other lenses when it is wide open.  What I have also noticed is the extent of the vignetting across the whole frame.  Most lenses display vignetting just in the corners but with this lens I was very aware that the darker areas extended well in toward the center of the image.  More than I have seen before with any of my other lenses. most people doing macro shots this will not be much of a problem though as f2.8 produces such a razor thin DOF with close up subjects that they will routinely stop the lens down well beyond f2.8 and I wander if Canon had this in mind when they were making the lens.

Since the lenses introduction there has been a lot of talk as to its suitability for shooting video.  Canon DSLRs do not feature any inbuilt mechanical or electronic image stabilization like most video cameras do.  As a result they are very susceptible to camera shake when being hand held and as with all camera movement it is most visible with lenses in the longer range where all movement is magnified.  A 100mm lens would definitely fall into this range, especially when shooting close up subjects.  Hand held video shots are noticeably smoother whether you are holding the camera still or panning.  I made a quick video to demonstrate which you can watch below.  The IS is very noisy though as you will hear in the video, there is no way you can get away with using the on board microphone.  Even using a hotshoe mounted mic would be pushing it unless it has a very focused direction to it.  Hopefully we will see Canon put this type of stabilization in a mid range zoom lens.  That would be a fantastic lens….. 24-70 f2.8 IS anyone ??

Hybris IS test with Canon 100mm 2.8 L Macro from Dan Carr on Vimeo.

Canon rates the IS to give somewhere between a 3-stop and 2-stop advantage to you depending on the shooting distance from the subject. objects at a 1:1 ratio hand held is a very difficult thing to do because depth of focus is so shallow but at least the IS helps you to see a much clearer and less shaky image through the viewfinder so I was able to gauge more accurately when the subject was in focus.

Other things you can shoot with this lens 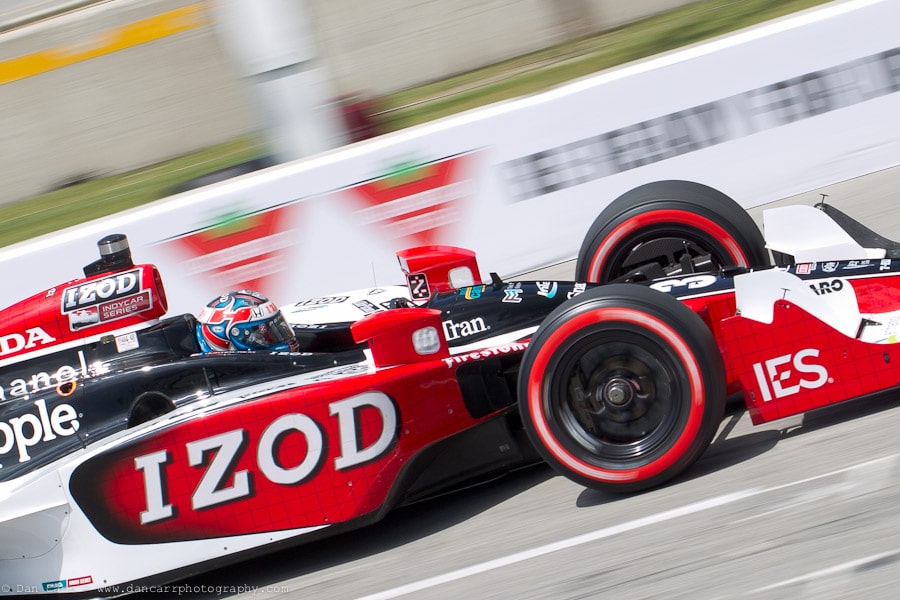 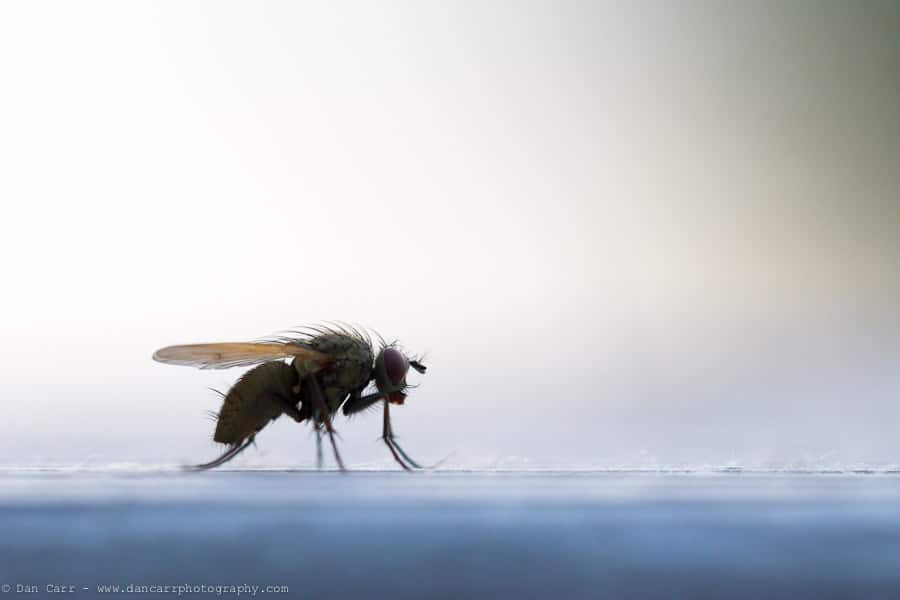 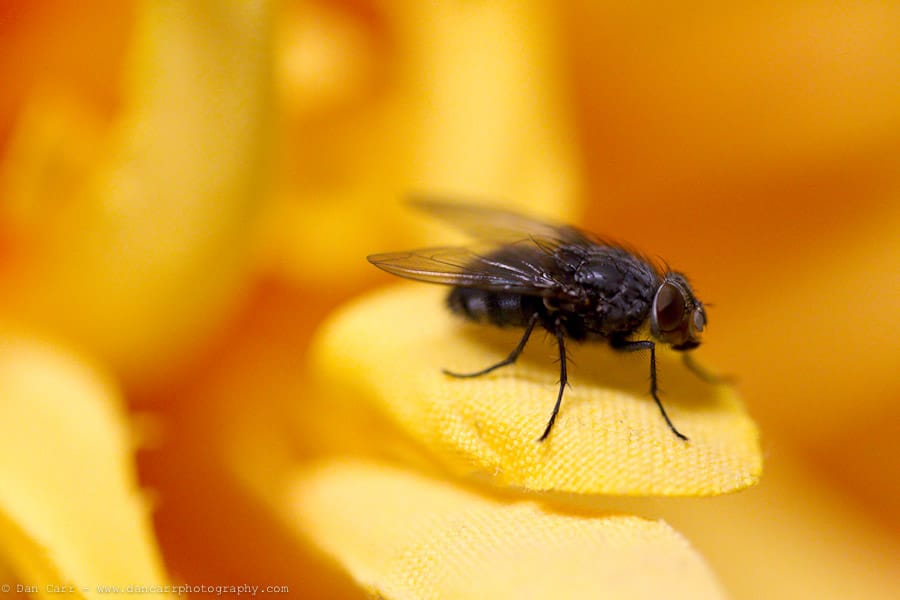 The IS definitely comes in to play here this shot of the fly was at 1/60 of a second which is pretty good for macro distances where every tiny movement is amplified. 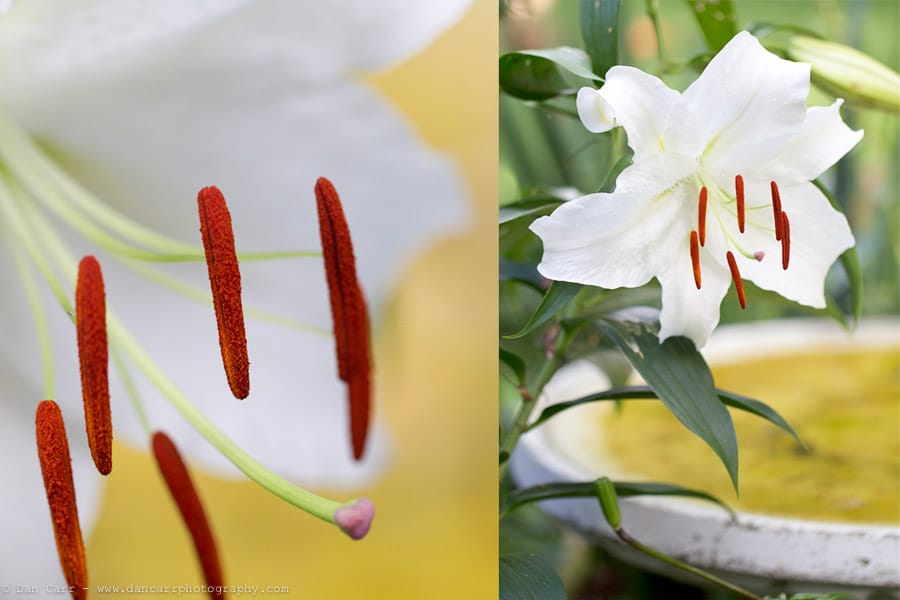 The first thing to say about this lens is that it is extremely fun to use.  I’m not a regular macro shooter but I found myself looking for photos that I wouldn’t normally try to shoot.  Any lens that gets you out shooting more is good in my book!  Until the 100mm f2.8 L Macro came along my recommendation for best value Canon lens was always the 85mm f1.8.  The 85mm is a VERY sharp lens but I think now I will also tell people to consider this lens too.  The 100mm is probably the sharpest lens I have tested and incredibly it is almost equally sharp across the whole aperture range.  It is quite a bit more expensive than the 85mm but its weather sealed and has macro capabilities and IS.  For an L lens it is one of the cheapest and definitely the best value L lens from Canon.  As you can see from some of my shots there are many uses for a lens of this focal length.  On a full frame camera or 1.3 crop it can make a pleasing portrait lens.  I think on a 1.6 crop though it might be a bit too long.  With a 2.8 aperture you can also use it for indoor sports and the sharpness will render any landscapes in spectacular fashion.  The Hybrid IS system is a step up from any other lens based stabilization that I have tried before.  It used to be the case that macro photography required a tripod.  You need to stop down a long way in some cases to get enough DOF for a subject but with this IS and the high ISO capabilities of cameras like the 5dMKII and 1dMKIV (my test cameras) I happily ran around without a tripod making the images you see above. This permits you great freedom and it was a lot of fun.  My go to lens for quick trips or general use was the 24-105mm f4 but with this around I always found myself reaching for it instead of the zoom.  Obviously it is leagues ahead in sharpness, and what it lacks in zoom versatility it makes up for in close focusing versatility and exceptional video results.  What are the bad points of this lens then?  Well the new plastic finish might not be to everyone’s liking and for some reason I found that the rubber zoom ring really attracted an abnormally large amount of dirt.  An inexplicable feature that I have never come across before, for some reason dirt just seemed to be attracted to it!  Not a big deal though.  Vignetting at 2.8 is quite noticeable but all but gone by f4.  I really think this is one of Canon’s most impressive offerings so far and it is refreshing to see it offered at what I would consider to be very good value.  If the Hybrid-IS is a sign of things to come then we will be seeing some very interesting lenses in the future.  This is a highly recommended lens that makes a nice addition to anyone’s bag, especially if you don’t already have a medium length prime or a macro.