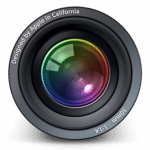 This sort of follows on from the review I did a few days ago of the Gisteq PhotoTrackr. I was not overly enamored with the software that came in the box with the PhotoTrackr but it did allow you to export the GPS track to a .gpx file and that meant you can upload it to other software. With the introduction of Aperture 3.0, Apple added compatibility with geotagging to the popular photographic organizational tool. The new “places” tool in Aperture 3 lets you sort and view your photos by location, and also lets you geotag your photos either by uploading a .gpx file from a third party tracking device or by syncing with information in your iPhone photos. Once Aperture has cataloged a photo that contains GPS coordinates it then uses what apple terms “reverse geocoding” to translate a GPS location into familiar place names or names of a place of interest. For example, the photos that I tested the PhotoTrackr with were all shot at Whistler Blackcomb ski resort in British Columbia. When the shots were imported into Aperture 3 their location was listed as exactly that “Whistler Blackcomb ski resort, Britihs Columbia”. Using this information, Aperture allows you to sort your photos in the Places interface, using drop down boxes for things like country, state and city. Finding every photo that you ever took while on holiday in Egypt for example, would be a breeze. As would narrowing things down to find all the photos you took of the Pyramids while in Egypt, so long as everything was geotagged.  In fact even if it is not, you can assign a location by simply dragging a photo or collection of photos to a location on the map, and whilst this is not quite as accurate it is useful for updating a back catalog of photos that likely spans a period when you did not have a geotagging device. 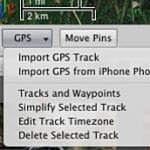 So how do you go about geotagging your shots in Aperture 3 then? Well as polished as the rest of the program seems now, the places feature is still a little lacking. It would have been nice if Apple had implemented support for a simultaneous import in the catalog, whilst matching photos with coordinates from a .gpx file. There are other pieces of software that can do this so i’m not sure why it wasn’t included here. instead of this though you just go ahead and import your shots as you normally would and then click the places icon at the top of the screen. This opens the map display but also still allows you to browse your projects in a pane below the map. At the bottom left of the map is a button marked GPS. Clicking this reveals the option to import GPS Track. Using this option you can select the .gpx (or NMEA) file from your tracking device, and the whole track will then be shown on the map. The next step is important, and something that I got wrong a few times before I figure out what was going on. You need to select the photos you wish to tag from the browser pane, either as a folder or by selecting individual shots with thumbnails. You then need to drag those shots onto the map while holding down the mouse button. Drag the shots to the track that has appeared on the map and you will see the pin “snap” to the track. Whilst still holding down the mouse button, move the pin along the track line until the tiny box next to the pin reads an offset of 0 hrs and 0 mins. By doing this you are showing aperture where the first shot was taken and from there it will ask you if you want to assign locations to the other photos based on time. I’m not sure why Aperture requires you to point to the location of the first photo though, again it seems like an unnecessary step in the process that other similar software does not require you to do. Nonetheless, it seems to work once you have done this, and pins are marked on the map at the location f your shots. 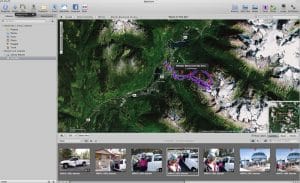 All photos shot with you iPhone automatically include GPS data so when you import those into your Aperture library they will show up on the map. If you do not have a separate GPS tracker for your regular camera you can use the data in your iPhone photos to place the images from your other camera. Simply snap a quick photo on your iPhone at the location of your other photos. Then select Import GPS from iPhone photos on the menu. This will bring up all your photos currently on the iPhone and allow you to select the ones related to the current project you are tagging. Once selected, they appear as purple waypoints on the map, and you simply drag the other photos from the same location, onto the waypoint to assign the GPS data. This works as a good solution if you are taking a lot of photos in one particular location, for example at a scenic viewpoint, or some sort of tourist attraction. If you want very specific location data though from a hike or a long journey then a separate GPS tracker is far more accurate.

I think Apple has done a good job with offering a feature to people who do not necessarily own a stand-alone GPS tracking device. The implementation of the iPhone based tagging is nice, as is the speedy location search bar at the top of the map which really makes it easy to find that tiny town somewhere in Europe where you spent a family holiday 8 years ago. Assigning a location to non-geotagged photos is a breeze then, apart from the necessity to point to the first photo location when matching things to a proper GPS track file. Unfortunately though it seems that these GPS locations are stored on the Aperture library file and NOT embedded into the metadata of the photo immediately. Upon export from Aperture, it does write the GPS information to the file but only at this point. So if you export a JPEG from Aperture after tagging it in Places, then it will display the correct information if imported into another photo organization program such as Lightroom 2 or 3. BUT if you select to “export Master” from Aperture , it does not contain any GPS data. It means that if you ever decide to make a switch from using Aperture to organize your files, none of the RAW files you painstakingly tagged with GPS data would have that data with them in another program. If Apple can fix this it will be onto a real winner.