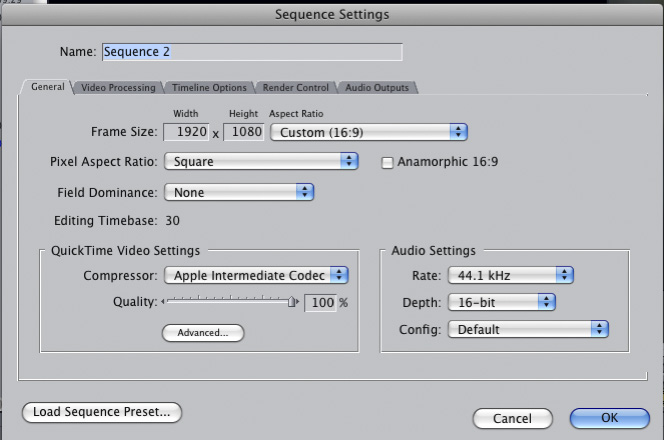 So once you have all of your video in a format that you can work with, import it all into Final Cut and set up a new project. This is where you need to tread carefully, depending on which version of FCP you have. I have Final Cut 5 and that caused some problems to begin with because I had no clue what I was doing. In FCP 6 and later, when you drag a clip into the timeline, it automatically converts the timeline/sequence settings to conform to the setting of your clip. In this case 1920×1080 , 30fps, AIC. In FCP5 though, this does not happen and it caught me out for a while. I had changed the Video&Audio settings under the file menu, but I was not aware that there is a settings panel for the sequence under the “sequence” menu, or ou can hit Command+zero. In this menu, you also need to specify the video size (1920×1080), the codec used (in my case AIC), and also the frames per second (30fps NOT 29.97fps). You will have to enter the “advanced” menu to find the drop down menu for frames per second and change it from the 29.97 default to 30fps. 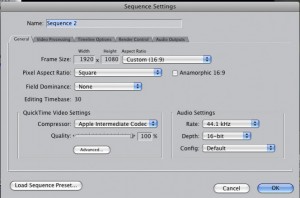 If you forget to change these settings, when you export the finished product you will be left with video that has been stretched from the default 720p size up to 1080p and it will look terrible! This took me a while to figure out….which some of you will no doubt find amusing. But bear in mind I am speaking as a person who only just opened Final Cut Pro for the first time and there’s a lot to take in!

As you now have your timeline set up as an AIC timeline, all the transcoded clips you made will now play and edit in real time. Once you have that setup its plane sailing. With a reasonable amount of RAM in your computer (i’d recommend 4gb or more) you will be able to throw clips around and add transitions to them in no time at all. For me, once I had those steps figure out, it all started to come together. Video with a 5dMKII is not that daunting after all.

Tomorrow I will post the first video that I made and also some practical information about the physical shooting side of things. Lens choice, shutter speeds and ND filters.