Skieur -Schuster is bigger in France 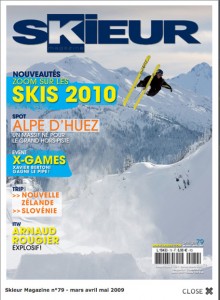 I got an e-mail this morning from Frank Raymond to say that I had the cover of the Skieur magazine in France. The photo was shot last winter in the Whistler backcountry with the Theory-3 crew while filming for their movie ” The Journal”. You can see another version of the shot from the magazine scan I posted from the Norweigen magazine yesterday. They are actually 2 different shots, I figured it would be nice to have a portrait and a landscape version of the shot so Joe did this trick a few times. It was a great day for shooting photos, the shot is actually taken shooting almost straight into the sun but there was a thin layer of cloud in front of it. It turned the whole alpine into a giant softbox so the highlights weren’t too harsh and I could still bring out detail in Joe even though he was backlit. Shot with a Canon 1dMKIIN, 70-200 2.8 L IS at 90mm , 1/1000, f8.0 ISO 200.