Behind the Shot: Fire Crane Flight 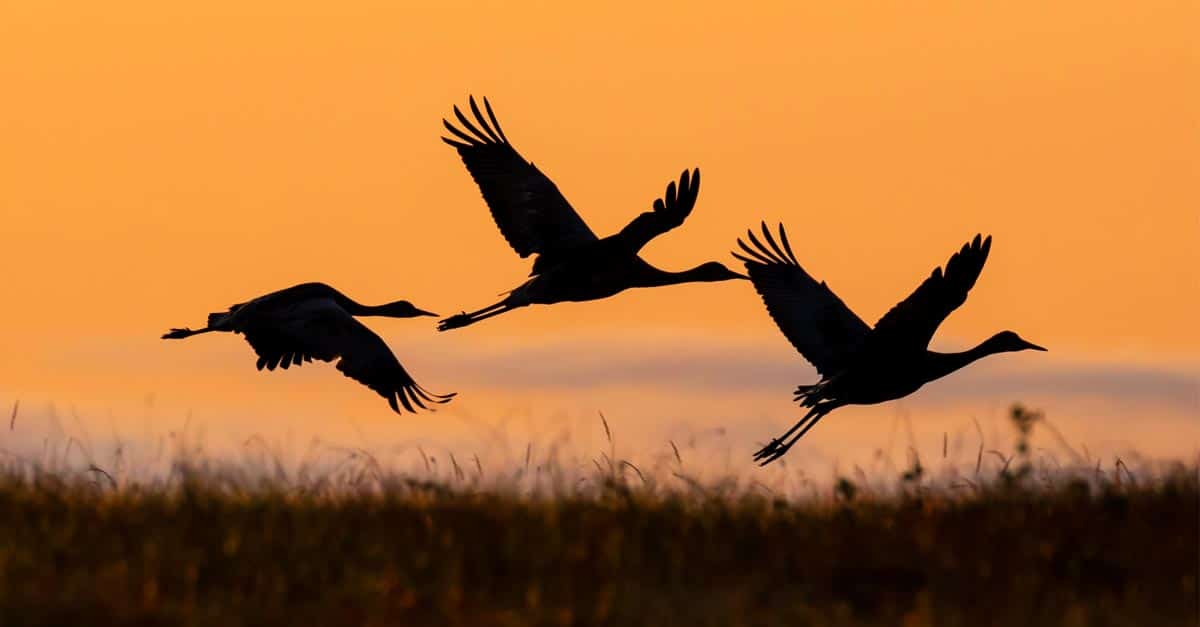 Gear used for this shot

The key to this shot was preparation and pre-visualization of the final image. I was driving back down through the Yukon on the Dempster Highway, returning from a trip to the Arctic Ocean. On trips like this I often adjust my sleep schedule so that I don’t miss the best hours of the day, and in this case, I had slept through the middle of the day and then hit the road in the evening.

Not only does that mean I’m driving during the nice evening and morning light, but also at the best time to see wildlife, and when the roads are quietest. Although the Dempster is generally pretty quiet anyway, and it’s likely there won’t be a single other car passing from 8pm to 8am.

On this day I photographed some landscape images in the evening and then pulled up to the viewpoint on the Arctic Circle to make some food and have a short nap as it got dark. At around 3am I began driving south again, hoping to reach a specific view for sunrise that I had scouted on the drive up the same road ten days prior.

When I saw these sandhill cranes in the long grass near the road I stopped the car. At this point I already had the final shot in my mind, and began to stack the deck in favour of success.

From previous experience I knew these birds would take flight fairly quickly, so the first thing I did was to switch my autofocus to AI Servo tracking. One shot focus is rarely the best option for birds in flight because they move too fast and usually erratically. I then set my drive speed to maximum and chose a broad set of AF points in the centre of the frame, switching away from my usual choice of a single AF point since I had no idea how the three birds would line up together in the air.

The next thing I did was set my exposure mode to manual so that I had total control over the brightness of the sky. I knew I wanted a silhouette, and camera’s don’t usually understand that concept when you need them to. Had I left the camera in aperture or shutter priority, it’s probable that the resulting image would be much brighter, destroying the deep orange sky and the silhouette.

Next I adjusted my aperture to f/7.1 to give me a good amount of light but also some depth in case the birds did not fly close together. Then chose an ISO that would allow me a fast enough shutter speed to freeze the motion of the bird’s wings.

Finally, I chose my lens. Whilst I did have a 400mm prime lens with me that had a wider aperture, I actually chose to go with the Canon 100-400mm zoom for this shot. The reasoning was that I had no real idea which way the birds would fly when they finally took off. If they had come towards me, the ability to zoom out with the 100-400 would have given me a few extra opportunities for a shot as they got closer.

All of this preparation was done quickly in my car so as to make as little movement as possible outside, and then I crept out onto the tundra, stooping low and trying to stay hidden behind the large tussocks. I knew they could take flight at any second, but essentially all of the thinking for the shot had already been done, and I just needed a little bit of luck in the positioning of the three birds in their formation – which I got!

Almost nothing was done to this shot in Lightroom apart from adding a little contrast and saturation and then cropping. I shot it at 400mm, but could have done with a little more reach in an ideal world. That said, after cropping it, I used the staggeringly clever Gigapixel AI software from Topaz labs to interpolate it back up to the original pixel dimensions and now I could easily make 5ft prints out of this. Maybe I will… this is one of my favourite shots of the year.