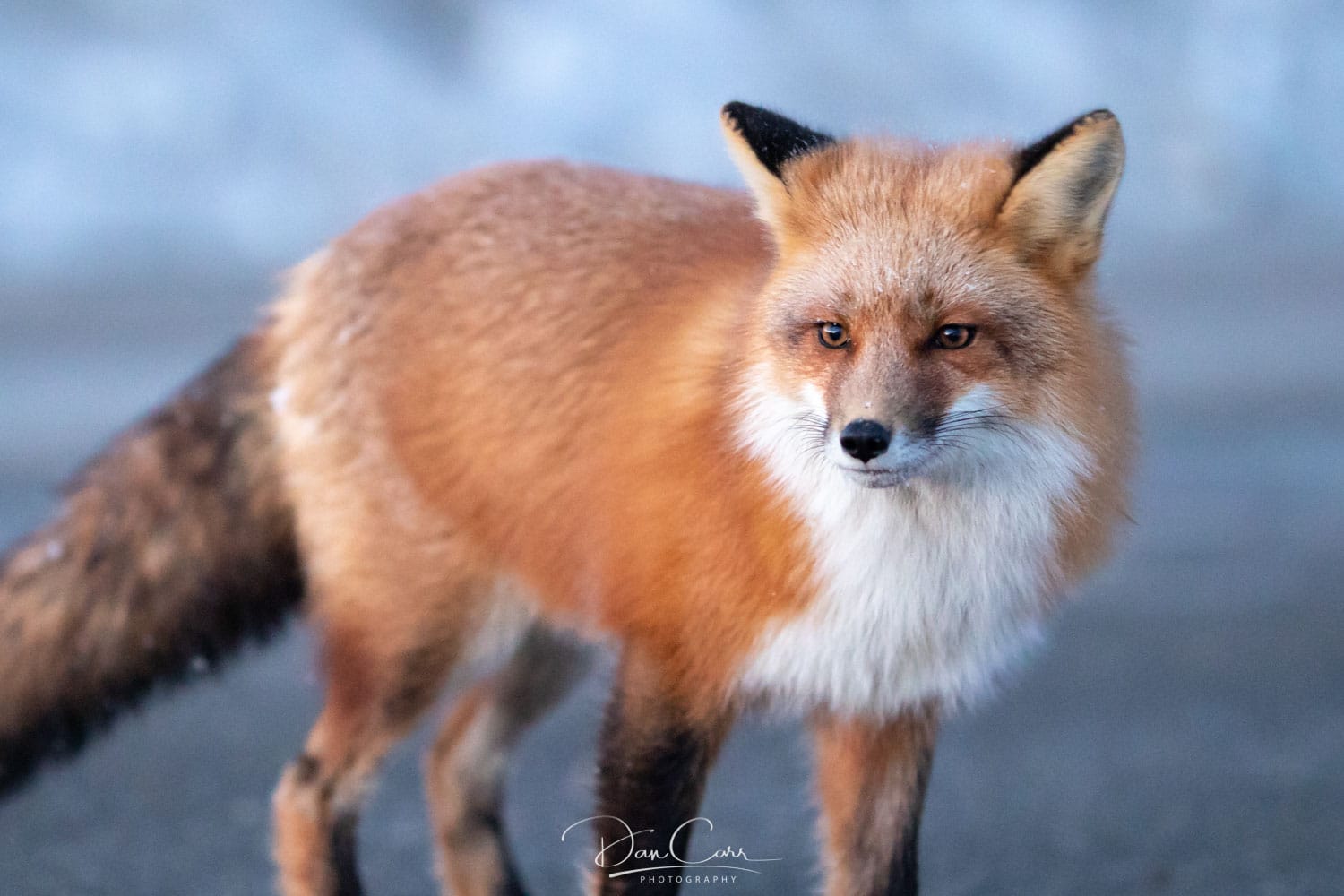 I’m currently testing the new Sigma 105mm f/1.4 ART lens for a full review. One of the things I wanted to try and get was some wildlife images with the incredibly shallow depth of field that this lens is becoming famous for. That’s quite a tall order because 105mm is not all that long of a focal length on a full frame camera!

This week I drove a few hundred kilometres East into part of the Yukon that I haven’t had much chance to explore before. We haven’t had snow in a couple of weeks and this meant some of the roads were in reasonable condition and made traveling fairly easy.

Snow might not be much of a problem where you live, but I’m still getting used to life up North and in the winter months many of the roads outside of the main population centre just don’t see much traffic and maintenance isn’t a priority. Several times on this quick trip I would pull over on the side of what is technically a main road (there aren’t even that many roads up here), and see no other passing cars for an hour or more.

With such a vast expanse of wilderness up here, often your only chance to be somewhere at sunrise is if you camp out in that area. There can easily be many hundreds of miles between motels! Such was the situation this week, so I camped just off the side of the highway even though temperatures would be -30Celsius (-22F) – the sort of temperatures you might reasonably expect to find in the Antarctic.

Obviously this can be fairly dangerous if you aren’t properly prepared – those kinds of temperatures can kill you fairly quickly. With that in mind, I thought I’d share with you my current sleep system which is working well for me.

The Mondoking Mattress is 6 inches thick when inflated, and has an R-Value of 11.4. Anything with an R-Value of more than 4 is considered to be “4-season” so this is some serious insulation beneath your body. Whilst it’s technically a “self inflating” foam mattress, it won’t self inflate in severe negative temperatures and you’ll have to use a pump sack to give it a helping hand. DO NOT blow into it with your moth in cold temperatures. The moisture in your breath will freeze in the mattress and you’ll have a bed full of ice that will be significantly colder. In the summer I obviously use a smaller and lighter sleeping mat, but in the winter, putting this kind of layer between you and the cols ground/snow will make all the difference to your comfort.

The Parsec sleeping bag is a 3-season bag that I use year round. In the winter I pair it with the Corus down quilt which attaches directly to the Parsec bag using straps on the blanket and pre-sewn loops on the sleeping bag. With this system you can really regulate your temperature nicely. It means I have a 4-season system, but in the height of the summer I can just use the Corus Quilt. In the shoulder seasons I use the Parsec bag and in the winter I combine the two. Those that sleep a bit cooler should consider the Thermarest Oberon bag instead, but I sleep pretty warm and this combination works for me if I’m dressed in a nice dry set of thermals inside the sleeping bag. I also wear a merino wool balaclava from Ice Breaker and a wool hat, with my favourite Nemo camp pillow stuffed into the bag’s hood.

I have always been a Thermarest customer for my sleeping pads but over the past couple of years I have been hugely impressed by their expansion into the sleeping bag market. Their bags are very high quality and I partcularly like the roomy fit

Sleeping out in the wilderness in these kinds of temperatures certainly won’t be for everyone, but it allowed me to be in the right place for sunrise and sure enough I found all kinds of wildlife at that hour of the day. Including the curious and beautiful fox you see in the headline image.