Behind the Shot: Moraine Lake Sunrise 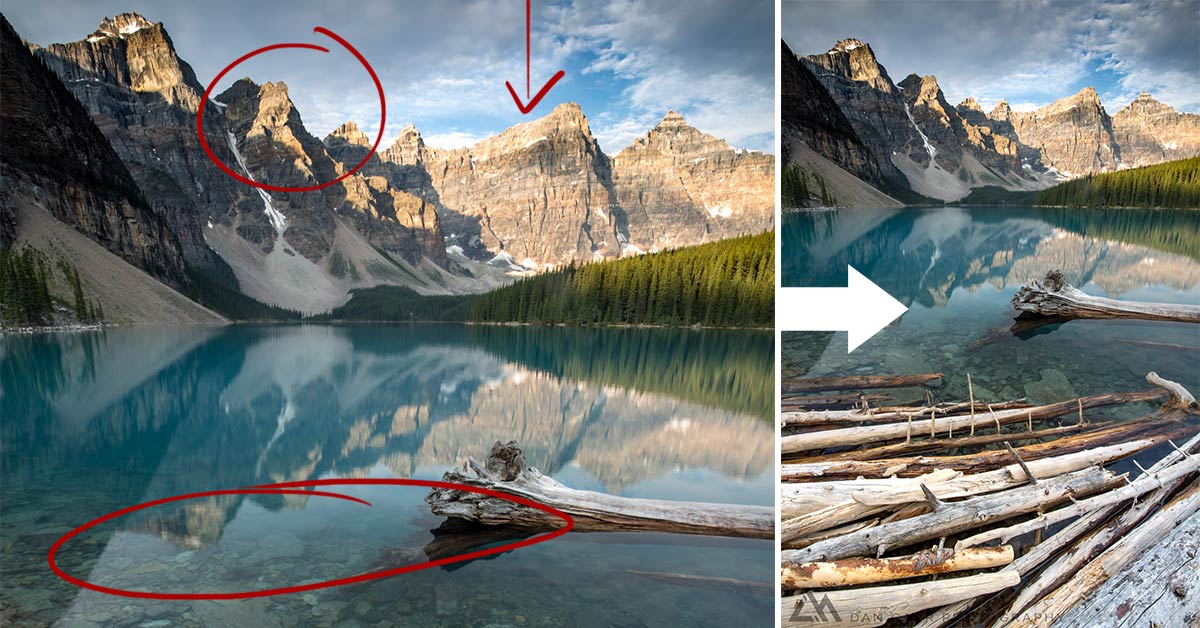 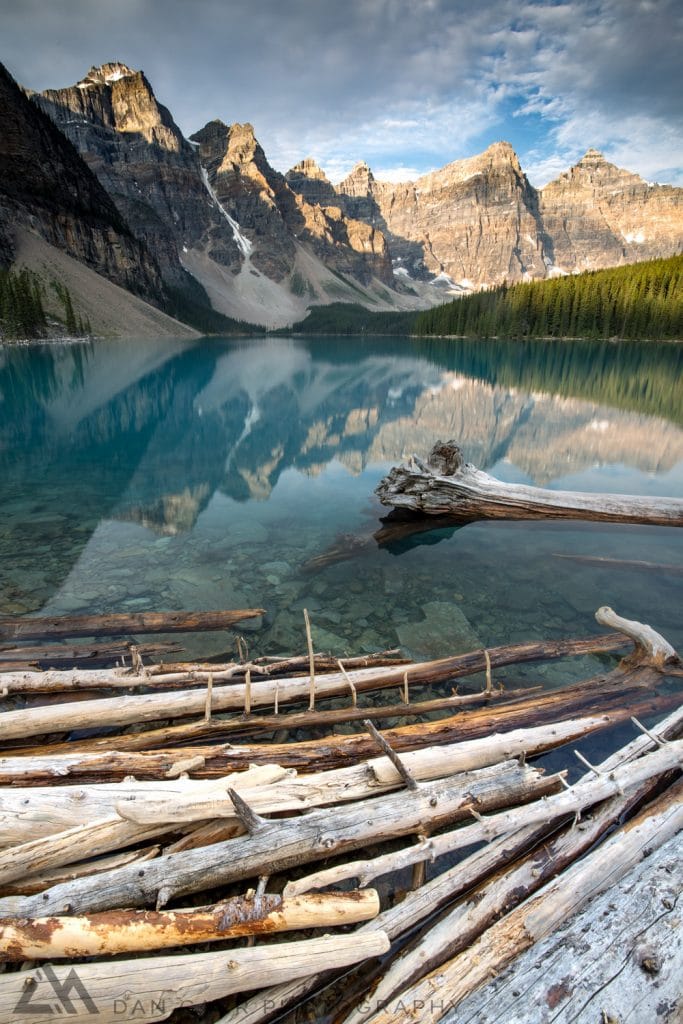 Moraine Lake is one of the most photographed lakes in the world, but this was actually my first time visiting it when I took this shot. Despite the remote looking landscape, there’s easy vehicle access in the summer months, and that means that it’s teeming with people during the day. There are nice shots to be had at night and in the evening, but sunrise is the quietest time, and you get to watch the first light of the day creep its way along the famous peaks at the far end of the lake.

The real difficulty with shooting at this location is coming up with something that looks even remotely unique from such a recognizable scene. The majority of shots at this spot are taken from higher up at several lookouts, so I avoided those when the light was perfect, in seach of something new(ish).

In the end I settled on this lakeside location with a nice collection of shoreline timber. Including a large portion of the timber in the shot was my attempt at making something a little different from this location, and I think it worked really well in balancing the compelling visuals of the sunlit peaks in the top half of the frame. The foreground visuals are just strong enough to add interest to the shot, but not so strong that it stops the eye from moving upwards across the image to the mountain peaks.  The lone log in the water and the mountain reflections add two more “breadcrumbs” of visual interest as the viewer’s eye is lead upwards across the image.

I used a circular polarizer which I’ll discuss in more detail further down the article, but I also used a 3-stop soft-edged graduated ND filter to hold back the exposure in the top half of the frame.  Even with this, I still had to add a graduated adjustment at the top of the image in Lightroom CC to lower the highlights a little bit on the mountains. I also used localized Lightroom adjustments to add some clarity to the clouds, and a little more contrast to the mountains on the right-hand side. Since the mountains wrap around the end of the lake, the sun angle varies on the peaks. This left a much higher contrast light on the left side of the frame Vs. those peaks on the right of the frame which had the sun coming onto them much closer to the perpendicular.

With no direct sunlight on the foreground logs, they were looking a little “flat” and dull, so I used a graduated adjustment in Lightroom to apply black and white level adjustments to the logs, as well as a small addition of clarity.

The final Lightroom adjustment was a slight increase in overall vibrance and saturation to bring out the wonderful green in the lake. 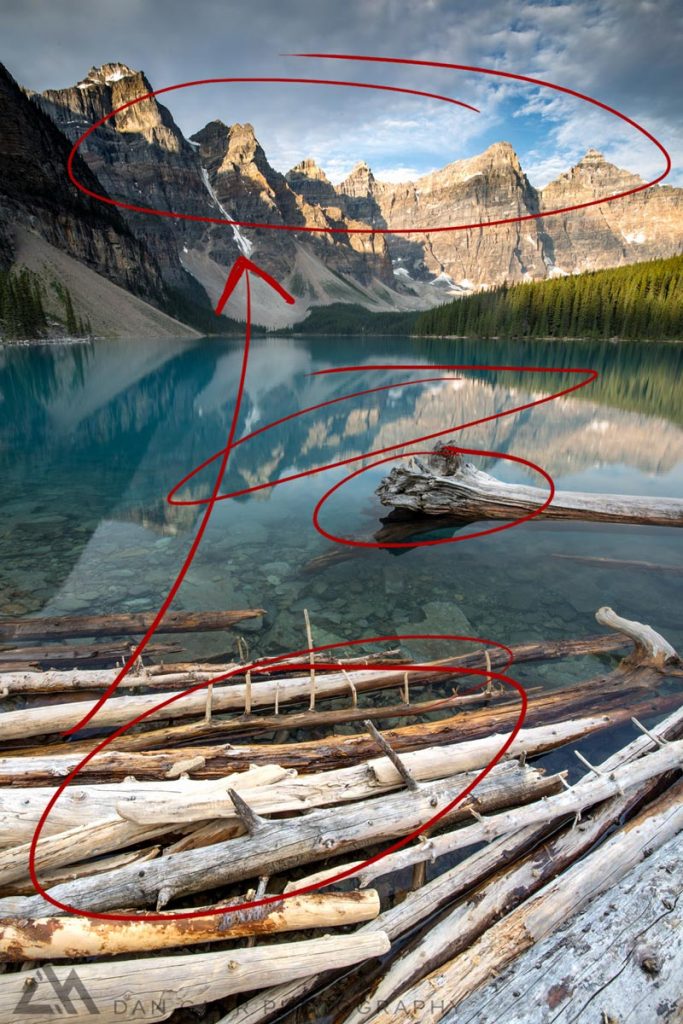 A trail of visually interesting objects to control the viewer’s path. 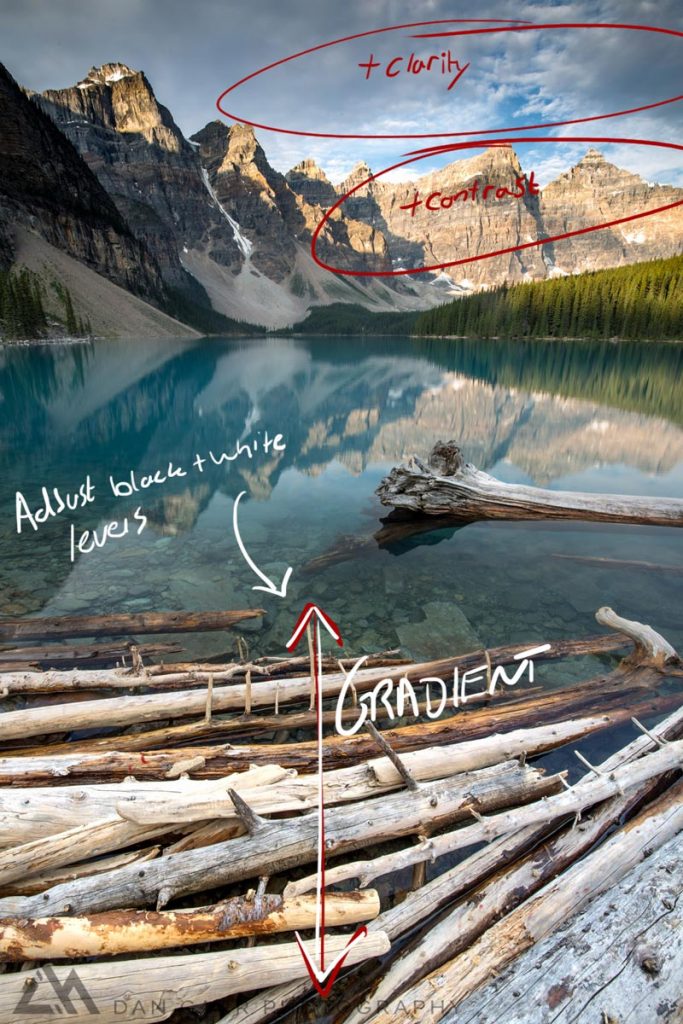 The Importance of a Circular Polarizer

I often recommend a circular polarizer to people who ask me what new lens they should buy. Yes, I know it isn’t a lens, but it can have a much more dramatic effect on your photography than buying a better lens that might simply yield a small percentage improvement in sharpness.

This GIF demonstrates the incredible difference such a filter can make on your landscape photography images that contain water!

With the polarizer engaged, the reflection of the sky on the water is decreased and we can see right into the lake.