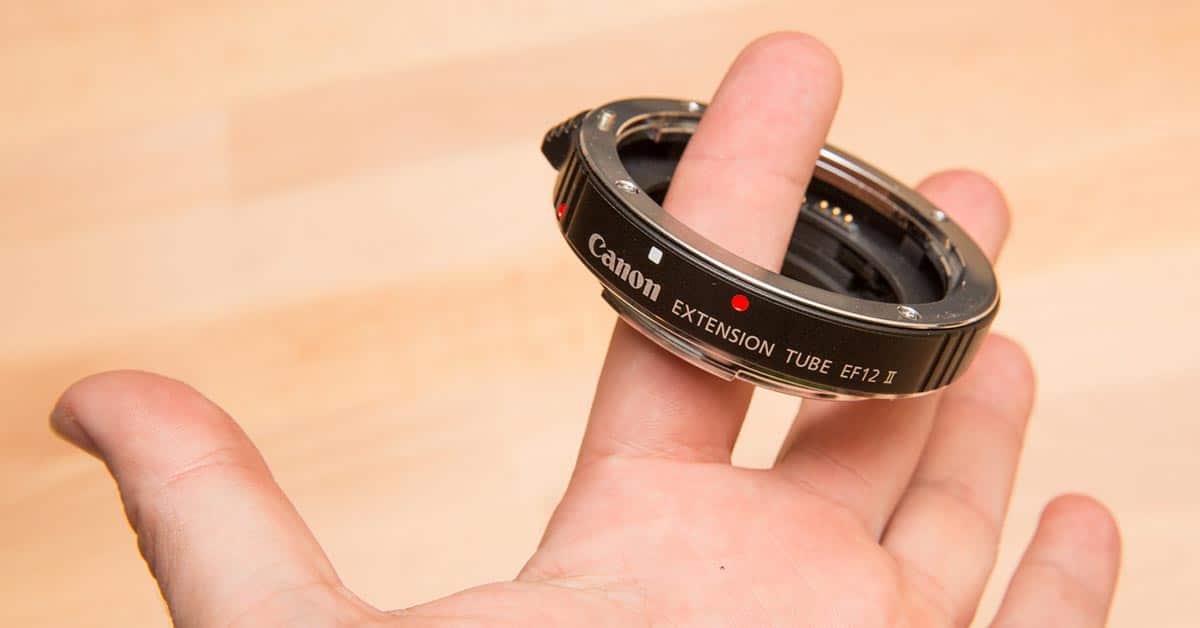 Extension tubes are a great little lens accessory, and I almost always have at least one of the Canon ones in my bag these days. At first glance they look like small, black extenders (sometimes called teleconverters), but actually they don’t have any optics inside them at all. It can be a bit confusing because extenders and extension tubes look similar, so let’s be clear from the start which is which, and what they do: 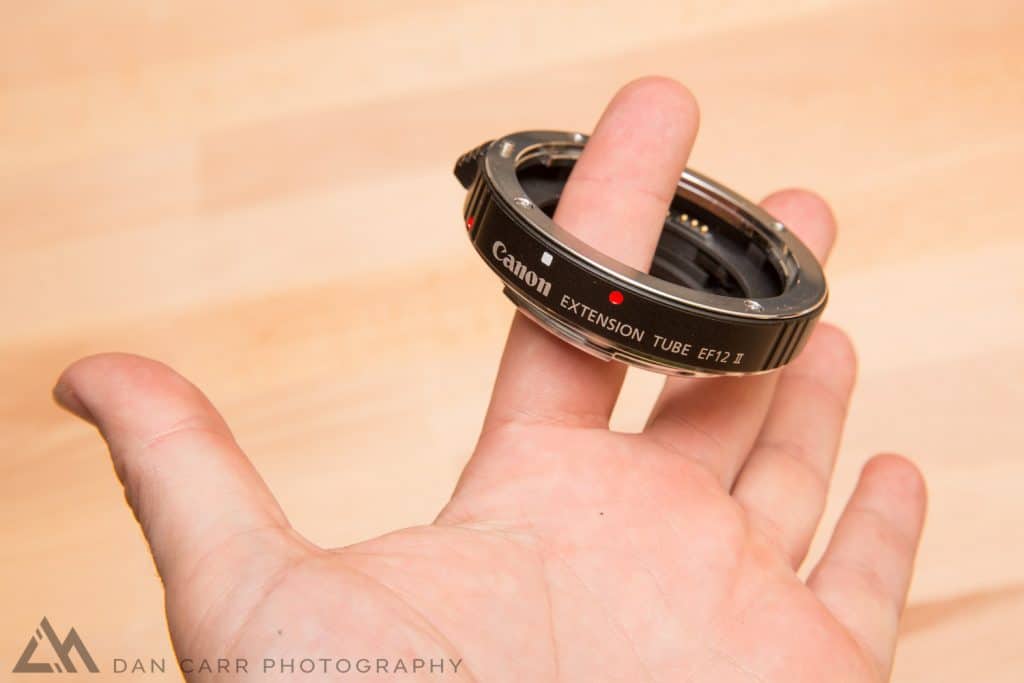 These sit between the lens and the camera body and act as a spacer to move the lens away from the camera’s sensor. This has the effect of shortening the MFD (minimum focus distance) so that you can focus on objects that are much closer to the lens. In other words, you can get macro-like effects from a non-macro lens. The greater the thickness of extension tube used, the closer you can get the lens to the subject. The downside is that you lose the ability to focus to infinity, and a small amount of vignetting can occur if you don’t stop the lens down enough. 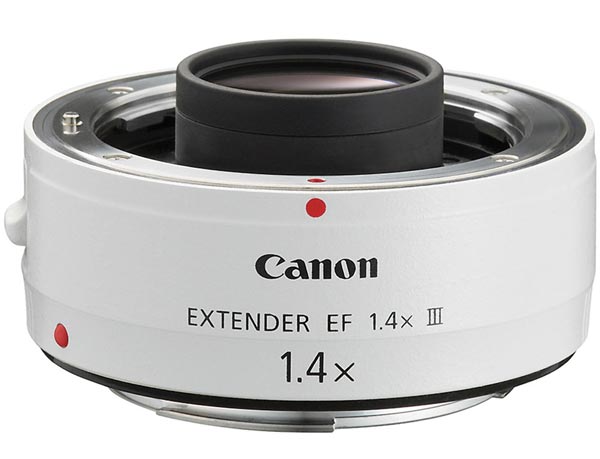 Extenders do have optical elements inside them and they multiply the focal length of the lens that they are attached to. Most often found in 1.4x and 2x varieties. They also sit between the lens and the camera body, but they can slightly degrade image quality, and do reduce the amount of light getting into the lens. They are also a very crucial part of my usual photography kit, but for very different reasons to extension tubes.

Further reading: The Ultimate Guide to Extenders or Teleconverters – my in-depth article on Shutter Muse.

What Are Extension Tubes Useful For?

If you don’t want the weight of carrying around a dedicated macro lens, you can use extension tubes to get similar results using your existing lenses. I have a Canon 100mm f/2.8 L IS macro lens, but I don’t take it with me unless my specific goal is macro photography. Occasionally an unexpected macro opportunity will come along though, and that’s when an extension tube is really handy to use on a lens like my 24-70 f/2.8 L II. Since extension tubes shorten the existing MFD of a lens, it pays to already have a lens that has a close focusing distance. Many people like to use them with 50mm f/1.8 primes because these tend to already have a short MFD, which is then made even shorter. A “Nifty Fifty” and a set of extension tubes is a great low-budget macro setup that’s also lightweight!

Aside from using them on smaller lenses to photograph really small subjects or objects, the other big use for extension tubes is on super telephoto lenses for wildlife photography. Super telephoto lenses tend to have quite long minimum focus distances, so it can be tricky when shooting smaller animals like small mammals and birds. Often you’ll want to get a bit closer to them so that they fill more of your frame, but you can find that your super telephoto lens won’t focus when you get that close. The extension tube will solve that problem and shorten your MFD to allow you to get the subject larger in the frame. The Canon 12mm tube is so small and light that it fits into my MindShift Filter Nest Mini filter holder, so it’s pretty much always with me. If I knew I was deliberately targeting something very small then I’d also pack a 25mm tube.

The second thing that extension tubes are useful for is stacking extenders together to shoot at very long focal lengths. This isn’t something I do very often, but if you need to stack Canon extenders together then you need to put an extension tube between the two so that they are spaced apart enough for the protruding options not to interfere with the connection. In fact what’s more useful is simply connecting them together in my bag for ease of storage. I often travel with the extenders this way. 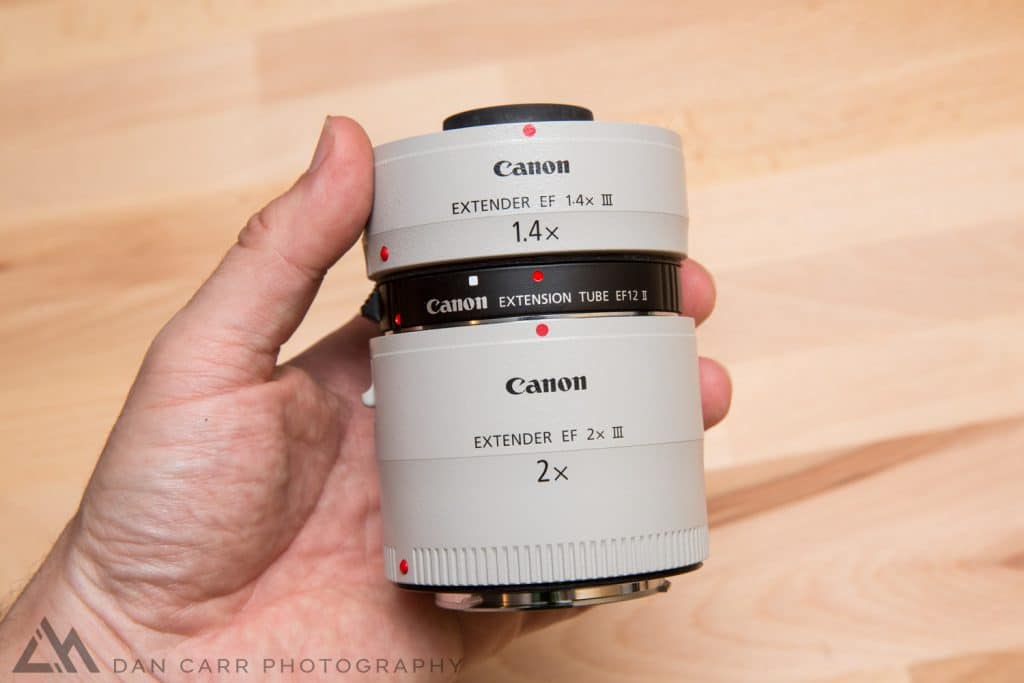 Short prime lenses make great candidates for using with extension tubes, and the venerable “Nifty Fifty” is no exception. The following photos were taken as a demonstration of what extension tubes can do for you. The first photo is simply taken with the 50mm f/1.8 STM at the closest possible point at which the lens would focus on the subject, the MFD (minimum focus distance). The second photo is the same lens, but this time paired with a Canon 25mm extension tube. With the extension tube in place, we can now get MUCH closer to the same subject! Pretty cool, right?

This isn’t quite 1:1 macro, but it’s not far off and the whole setup only costs around $250 for the lens and the tube. 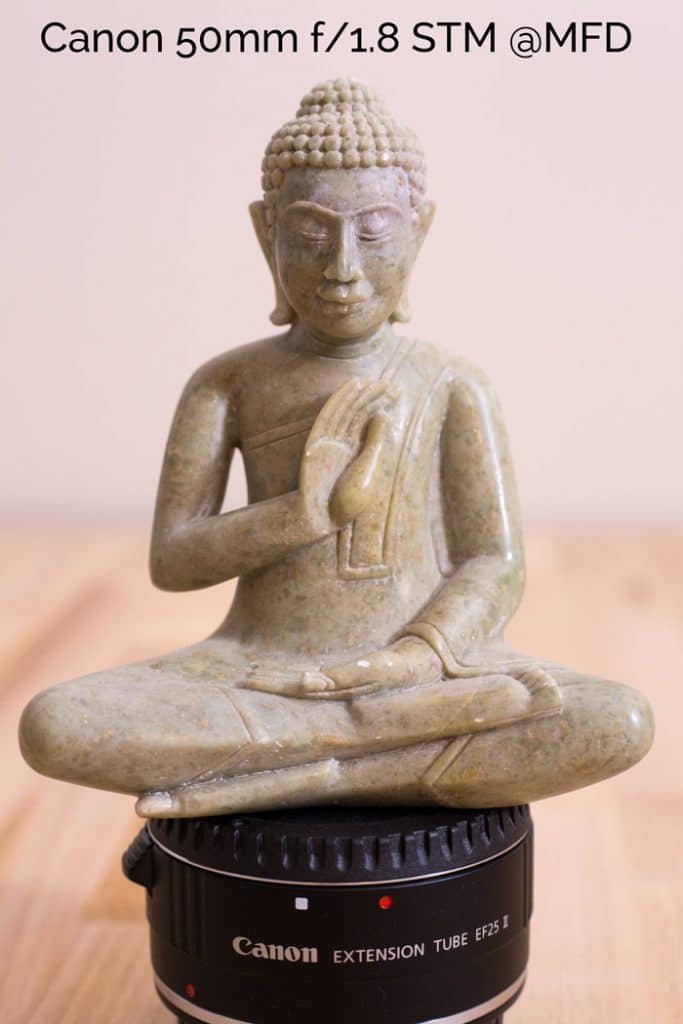 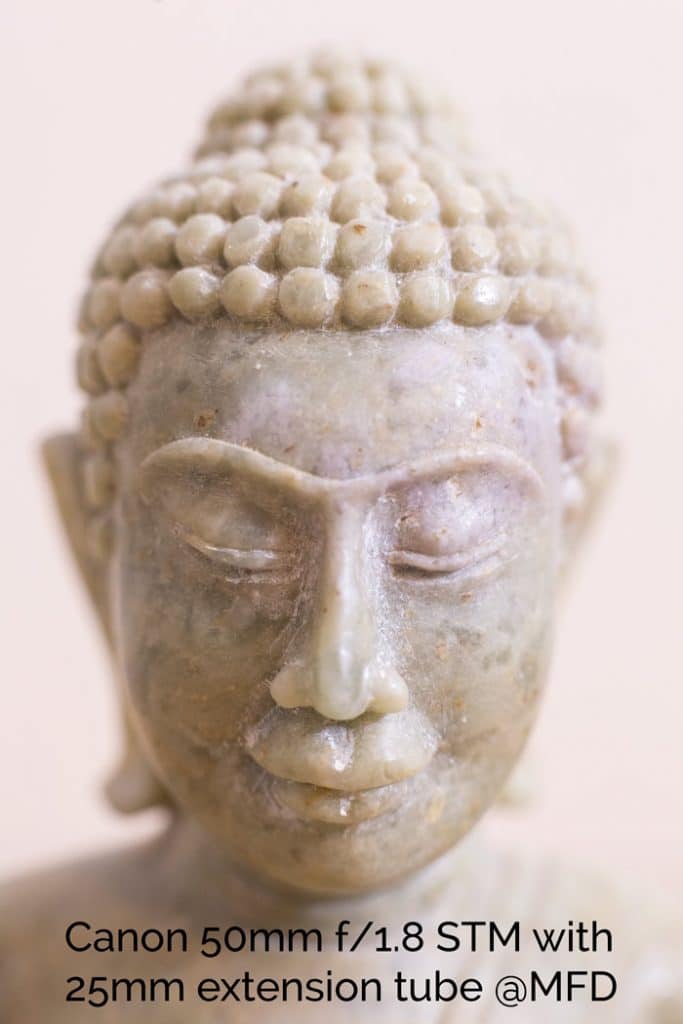 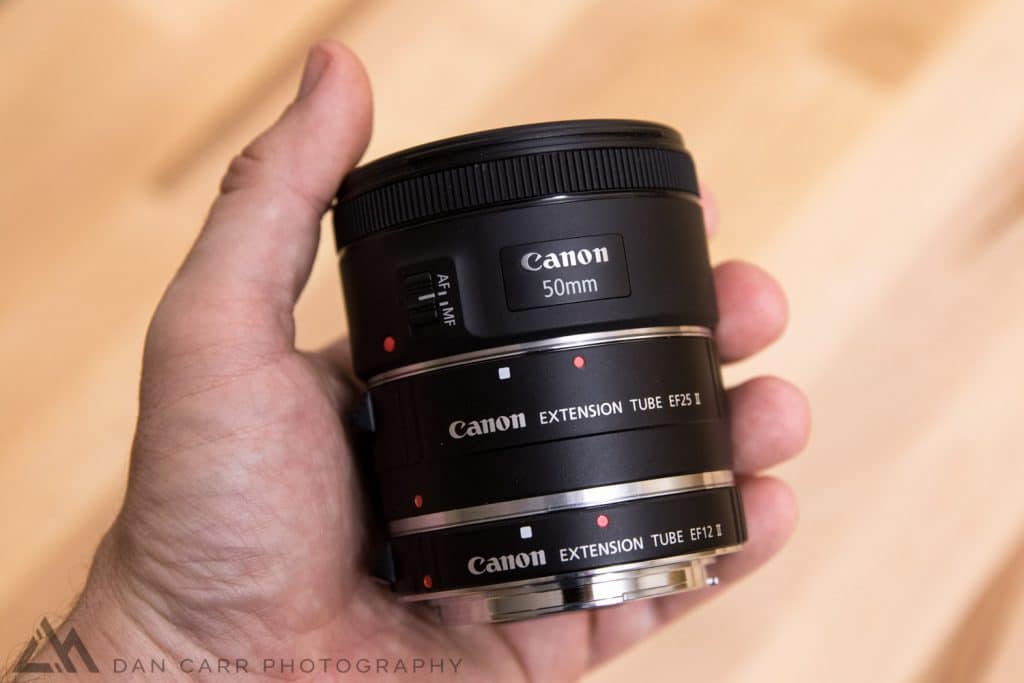 Even with both a 25mm tube and a 12mm tube stacked on the Nifty Fifty, it’s still a pretty small and lightweight package for a macro solution. Not to mention cost-effective.

Tubes come in three distinct types: Official Canon tubes, third-party tubes like the popular Kenko brand ones, and then third-party “dumb” tubes. The official Canon tubes, and many of the third-party tube sets will still allow autofocus and control of the aperture. They simply have electronic contacts that pass the electrical signal right through the extension tube to the camera. This third type, the “dumb” tubes, are a type of extension tube that is MUCH cheaper to buy (around $15), but they offer no autofocus or electronic control of the aperture. Whilst manual focus might not be a huge disadvantage to a lot of tripod-based macro work, having no aperture control is a pain in the ass! Trust me! It means that the lens will be stuck wide open unless you go through the fiddly process of removing the tube, putting the lens on the camera, selecting the aperture, holding the depth of field preview button and removing the lens at the same time. Then you have to reconnect the lens again….I’ve lost you already haven’t I? It’s a real pain, and in my opinion it’s just not worth it. If you can’t afford the official Canon extension tubes that’s fair enough, but just make sure you get one of the ones that has electronic contacts.