Behind the Shot: The Tip of a Snowflake 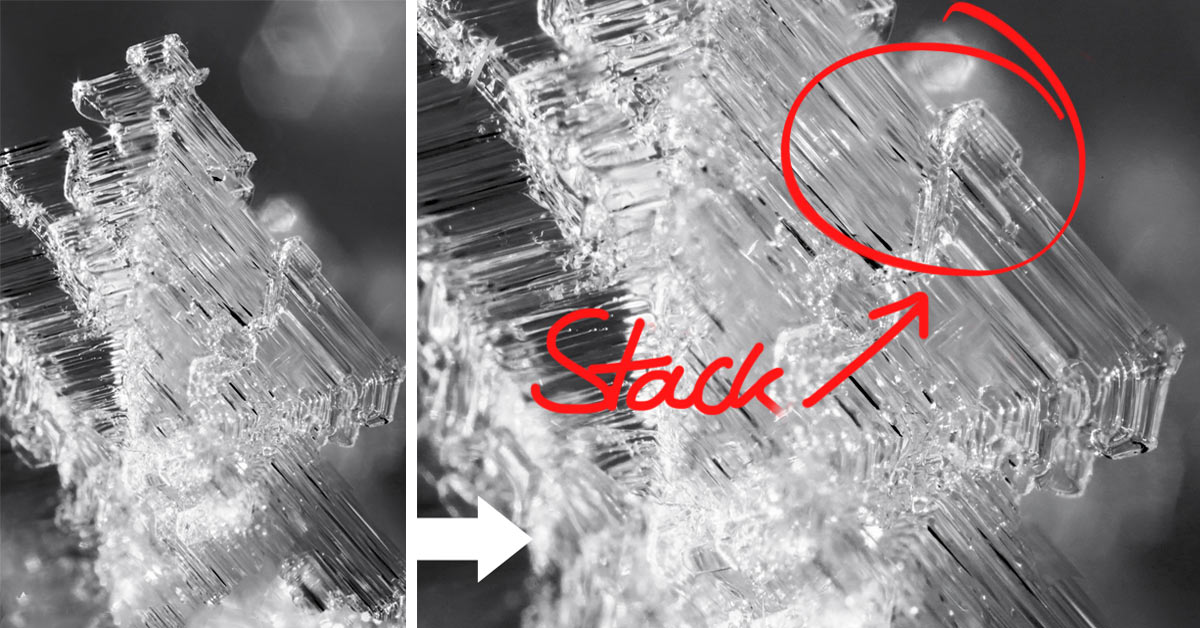 Now, I also own the Canon 100mm IS macro but that only goes to 1x magnification which would have shown the whole crystal.  I wanted to get in even closer, and there really is no other lens for the job other than the fascinating MP-E 65mm.  Even stacking extension tubes on the 100mm macro will only get you to about 3x magnification, so 5x is unprecedented and to my knowledge nobody but Canon makes a lens like this. I mean look at it! It’s the TIP of a snowflake! How cool is that?!

It is a lot of fun when you get it right!  But fair warning….. it’s also one of the hardest lenses in the world to use.  A macro rail such as the B-150 is an absolute must because it has no focus ring on the lens, you can only focus by moving the lens forward and backward, which in this case is done by rotating the dial on the macro rail. I must admit that I am perhaps not a complete expert with this lens, and it takes some mental adjustment as well when you are picking a subject. Normally we would use our eyes and look around for a great subject, but since you can’t see the world at 5x magnification, I find that there’s a lot of experimentation to be done with this lens. Re-framing your shot is touch because the slightest movement of your ballhead sends the subject way out of the frame,  and actually it’s probably easier to move the subject if you can, instead of the camera.

Nonetheless, if you fancy a real challenge, this lens will surely make images that will captivate people’s attention. Even seemingly dull items like graphite pencil tips, suddenly reveal incredible patterns and textures.

The predictable problem with a lens like this is depth of field.  If you think a normal macro lens has a shallow depth of field when you put the subject as close to the lens as it will focus, you haven’t seen anything until you’ve tried this one. It’s paper thin when the aperture is wide, and even if you stop it down a good way, it’s only a few millimetres thick at MFD.

The best way to deal with this is to use focus stacking, which is a technique which involves taking multiple shots at slightly varying distances from the subject, thereby moving the focal point each time, then combining all the images together in Photoshop to manually craft a deeper depth of field. If you ever use this lens, this will absolutely have to be a technique you are comfortable with if you’re going to get the most out of it. This particular shot is a combination of 8 images stacked and blended together in Photoshop using the auto-align feature.