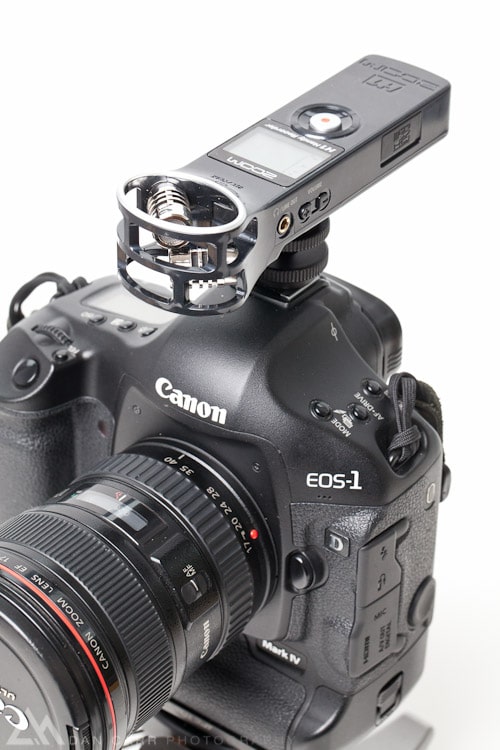 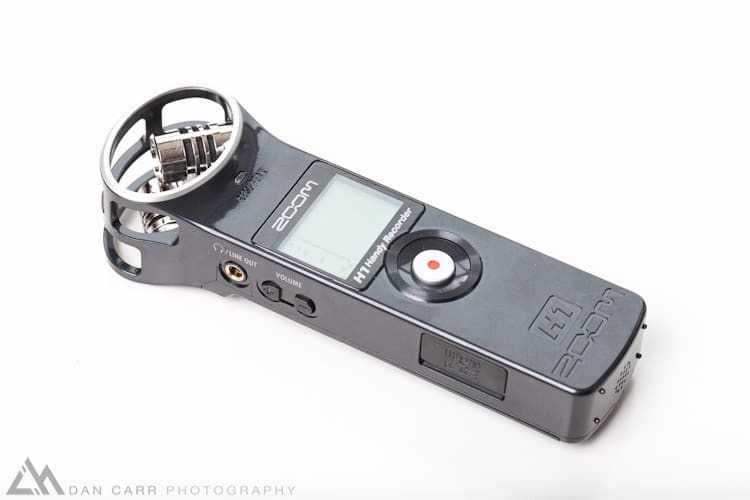 The Zoom H1 has been around for a year or so now and I’ve mentioned it before on this site but only now had a good reason to pick one up for myself.  At the time of writing this I’m packing my gear to head to France to shoot the 24 Heures Du Mans, arguably the worlds greatest motor race.  I decided that the sound of the cars on the track would be interesting to capture for some multimedia content after the event and the H1 looks to be a reasonable solution.  Ever since DSLRs began to record video, photographers have been looking for ways to expand their trade and offer more to their digital clients.  Whether it’s purely video or a melange of video, audio and photos from an event or news assignment, multimedia is here to stay on the internet or in digital magazines on platforms such as the iPad.  The only problem is that the on-board microphones of the DSLRs are….. well they are crap aren’t they!  So you need another solution and there’s two ways to do it.  Either you run an external mic into the camera and record the audio track alongside the video, or you use a separate reorder and sync the sound with the video in post production using software such as Plural Eyes.  The first option has speed and ease on it’s side whilst the second has audio fidelity and flexibility on it’s side.  A separate recorder can be placed anywhere, or simply used to record ambient noise. 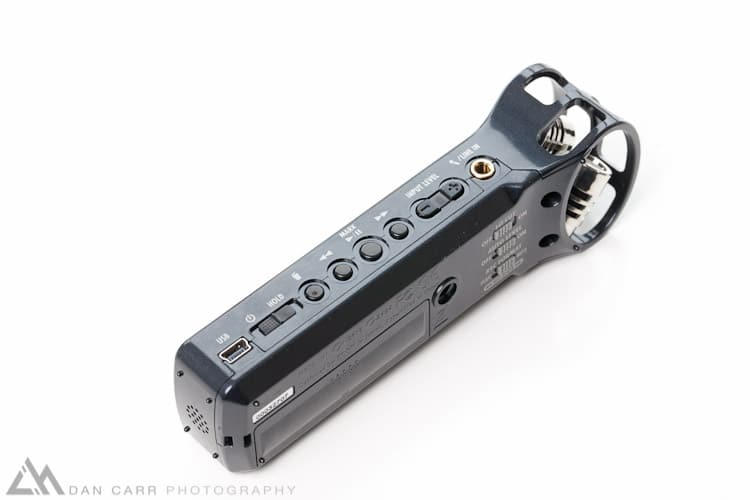 The zoom H1 forgoes a complex menu system for physical switches which is welcome given the limited size of the LCD screen.  Everything you need to achieve can be done with the flick of one of the many switches.  On mine, the input level rocker switch was a little spongy feeling on the negative side, while the positive side had a slight tactile click to it.  Output volume was the opposite.  Corners were definitely cut to reach the $99 price point.  There is a single line-in that allows you to connect a small shotgun mic or a lavalier mic but note that you cannot record the onboard mic AND the external source simultaneously like you can with the H1’s bigger brother the H4N. 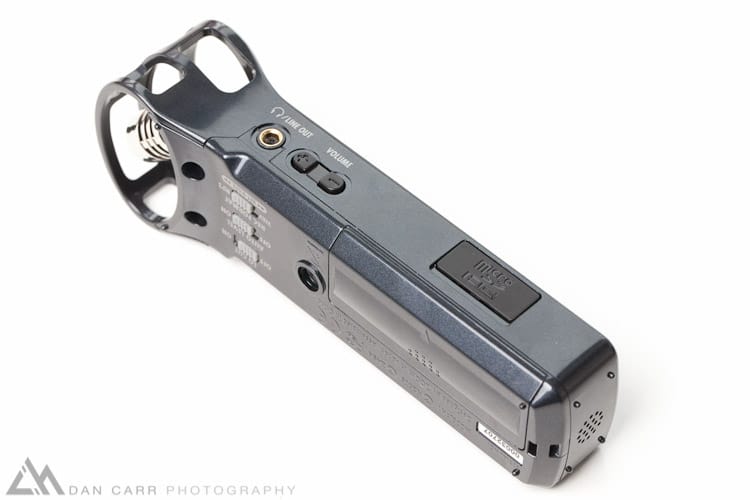 On the opposite side we have a micro SD slot.  The Zoom actually comes with a 2GB memory card which I thought was pretty good and unexpected for this price level.  The H1 runs off a single AA battery which is also provided.  A 2GB Micro SD card will allow you to record between 1 hour and 3 hours of WAV files depending on the compression you select and between 14 hours and 92 hours (!) of MP3, again depending on which of the 10 or so compression amounts you select.  At 320Kbps you can get 14 hours though which is great. 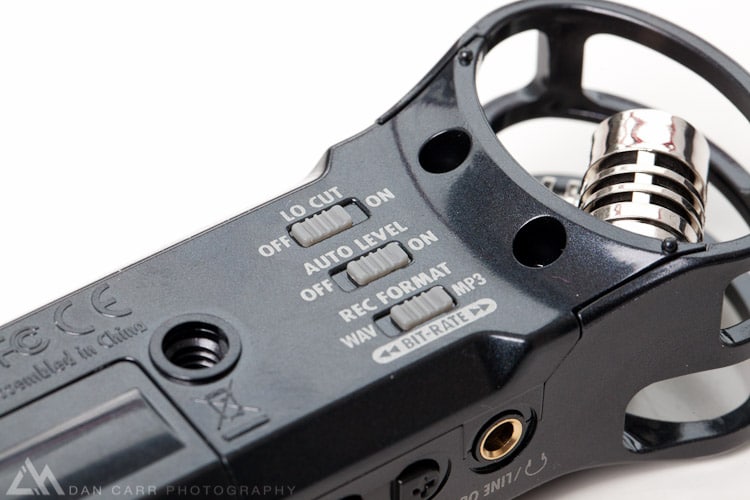 A lo cut filter to eliminate some room noise, auto level selection and recording format are again all simply selected by physical switches. 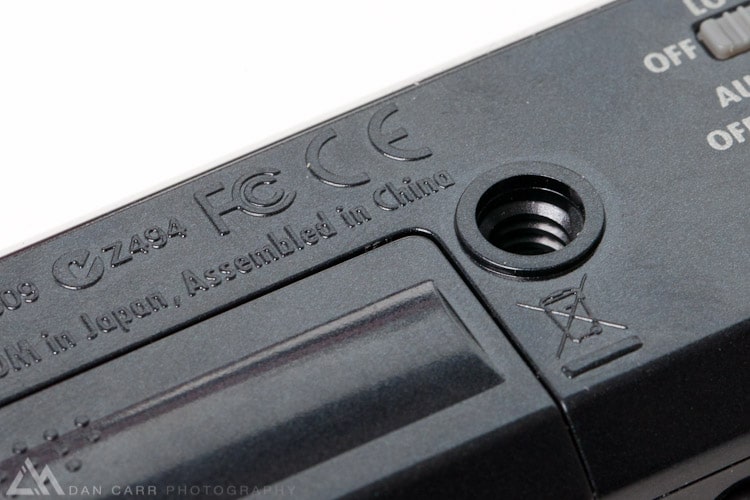 Hands down the worst part of the H1 is the plastic thread on the bottom.  You simply cannot get tight enough manufacturing tolerances for a technical element such as a threaded socket.  I tried several screws in the thread and all but one of them refused to screw in more than 3/4 of a turn.  Any force applied to the situation is likely to simply strip the thread.  I expect this thread to give out long long before the rest of the recorder.

To mount the recorder on the hotshoe of your camera you’ll need to pick up an adapter.  They are readily available from B&H photo though for a few bucks.  This particular one is actually park of an articulating arm from IKAN.

The hotshoe mounted position is great for run and gun movie shooting but it does get in the way if you want to put the viewfinder to your eye and take a photo.  Whilst I will use mine to shoot separate audio on some video, I also want to use it to capture some ambient noises from photo assignments that can be used in multimedia presentations.  For this purpose I need to shift the recorder out of the way of the viewfinder.  In the photo below you can see a good solution.  A short accessory arm from Letus moves it out of the way quite nicely. 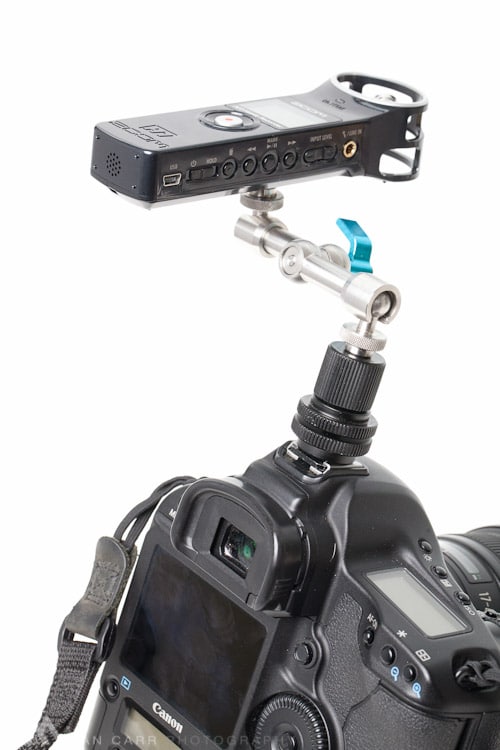 There’s far too many compression/quality options to do them all but here is a couple to give you an idea of the sound quality.

Having listened to the audio recorder by the H1 it’s hard to find fault with it in that category.  There isn’t really anything else to compare it to because nothing else is quite so cheap.  I have mixed feelings though about the product as a whole, and they might prove unfounded in the future….. but I just can’t see this thing holding up to all that much abuse.  And I don’t mean intentional or particularly hard abuse, simply tossing it in and out of a camera bag full of lenses.  I understand that what you are getting for $99 is a bargain in terms of functionality and audio quality but to hit the price point, the build quality seems bottom of the line.  I would much prefer a more solid build and a mid range price point.  The Zoom h4n comes in at $299 and I like it’s build.  If Samson had positioned the H1 at a $150 price point and spent that extra money on a metal thread in the base and some much more solid body construction then we’d almost be looking at a 10/10 product here.  The physical design and easy to use functionality are real winners for me, its a shame you are left holding something that feels like a toy.  I guess the compensating virtue is that it is extremely lightweight though !  You’ll have no idea you even packed it in your camera bag which is not something you can say about the frankly bulky H4n.  As I mentioned though there is nothing else out there in the price range that comes close to the audio quality of the H1 so from that respect this is a great buy.  You’ll just have to take great care of it!  I think if I intended to do mostly recording for video with this I would plump for the H4N and it’s multi track capabilities.  For someone looking to capture a few snippits of ambient sound though for a multimedia slideshow then the slip-it-in-your-pocket size of the H1 is a key feature.  In this day and age, as photogs are increasingly asked to broaden their scopes and bring back more than just photos from an assignment I think this is an awesome addition to my bag, despite the build quality shortcomings, $99 is a bargain.