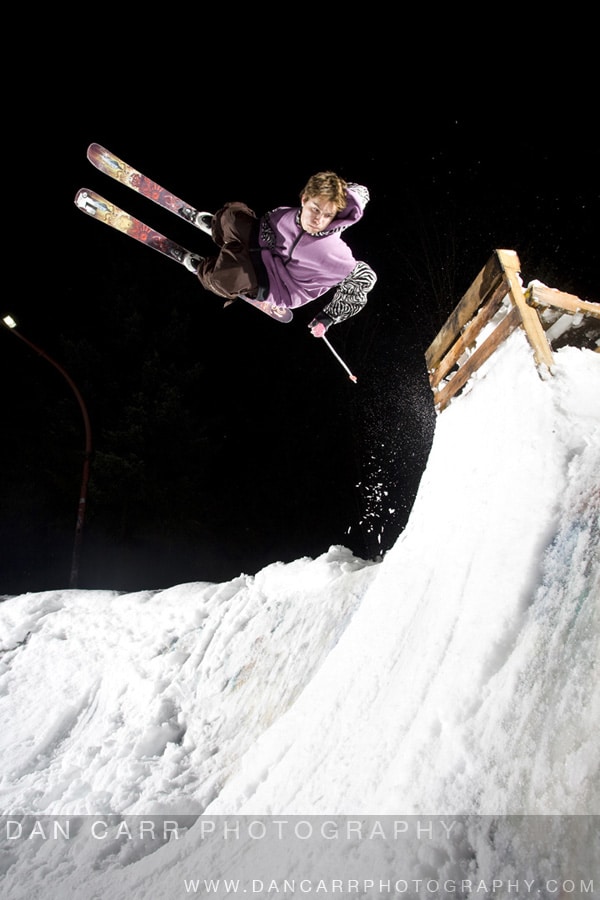 Flash photography can seem like something of a dark art to begin with. Pop-up, hot-shoe mounted, remote, fill and bounce; there are many ways a photographer can use flash to control the exposure and look of a photo. It is more complicated than ambient light photography so before you begin experimenting, make sure you have a good understanding of all the basics of exposure; shutter speed, aperture and ISO.

In ski photography, flash is used in two key ways. Firstly, as a substitute for ambient light for instance shooting rails at night, or tree skiing on a cloudy day. And secondly as fill flash to supplement the ambient light and fill in dark shadow areas where strong sunshine is creating undesirably high contrast or harsh light in the image.

If you have a DSLR then you will almost certainly have a pop-up flash. These are of very limited use for shooting action photos though. Partly because of the lack of control you are given over the settings, and partly because they are very low powered and only have a useful range of about 10ft. Up to this distance you can successfully use them for fill flash on static subjects but if you are serious about taking good photos then you need to buy a separate flash. Your camera won’t know that you are shooting action so be wary of it’s automatic use of the pop-up in some situations. It’s better to turn it off completely until you know that you need it.

With a hot-shoe mounted flash you are beginning to have the necessary control needed to start shooting some ski photos. These flashes have extremely complex brains inside them that evaluate the necessary flash output depending on the light situation. If you always have your flash set to automatic though, you will never learn anything new and I guarantee you that you are not getting the best possible photo.

Whatever type of flash you use, your camera will limit your shutter speed to around 1/250th or slower. For an evenly lit subject, the entire burst of light from the flash needs to occur during the fraction of a second that the shutter is completely open. This maximum shutter speed is called the x-sync and using a speed faster than this can result in a photo that displays dark bands of un-flashed areas. Some hot-shoe mounted flashes have a high speed sync mode that does allow the flash to sync with the shutter at faster speeds. This is achieved by greatly reducing the power output of the flash, which in-turn shortens the duration of the flash burst. Less power means you need to get much closer to your subject so whilst it’s good to know how to use this mode, it’s not always the answer and careful setting of your camera and flash settings can often yield a better result.

In flash photography you effectively control two exposures at the same time. The first is the ambient light exposure, controlled by your shutter speed. The second is your flash exposure controlled by your aperture or by adjusting your flash power. As the shutter curtains open to fully reveal the camera sensor, your flash fires to paintyour skier into the scene with a burst of light. The duration of this flash is much faster than the shutter speed though so the remaining time after the flash burst has fired, is left for the ambient light to paint in the background of the photo before the shutter curtains have fully closed. The action in the photo is frozen by the burst of light from the flash, and not by your shutter.

A single on camera flash is convenient, and a good starting point, but once you have mastered that the next step to creating professional looking shots is to learn about off-camera lighting. With today’s technology, the number of off camera flashes that you can add to a scene is almost endless. Radio transmitters attach to the camera and send a wireless signal to a receiver that mounts to your flash, allowing you to place it exactly where you want to capture the best shot. Many of my ski photos use 5 or more flashes synced to fire simultaneously and some guys take it even further than that. That much equipment is beyond the realms of most enthusiastic photographers but you can create incredible photos with careful placement of only one or two strobes. Learning to use off-camera flash creates those angles between the light and the camera that introduces shadows and texture to the scene, helping you to get a more realistic and three-dimensional look.

Techniques for multiple flash use and more information on x-sync and flash duration will appear in a separate article on this site in the near future.