NZ Trip – What worked and what didn’t

I’ve seen similar post on a couple of other photographers blogs before and always found them to be interesting and useful. When heading off on a long trip it can be tough to figure out how much gear to take and in what combination. On my recent trip I had to do just about every type of ski photography you can imagine. Backcountry skiing, heli skiing, daytime and night time park shooting, product shooting and portraiture. I was trying to accomplish this with only 2 pieces of checked in baggage (32KG each) and one piece of hand baggage and that was a struggle.

Predictably I took too much with me. Some of the gear stayed unused in my bag so here is a few notes in no particular order:

Think Tank Airport International: This is the bag I used to take my cameras and lenses on the plane. You can fit a huge amount of gear in this. Fully loaded with 8 lenses, 2 cameras and other miscellaneous trinkets it weighed in at 20kg but its dimensions are designed to make it legal carry on size. Unfortunately the weigh limit for carry on on air New Zealand was 7kg. My carry on is always over the limit so that’s no surprise. I just do the old trick of taking it all out and hanging cameras round your neck with lenses in your pocket. What did become a problem though is that this bag weighs 6KG when its empty….. leaving you with only 1 solitary KG of gear to be allowed in the bag should it get weighed by the “jobsworths” at the gate. Certainly worth consideration. Rolling cases are great for your back but I hadn’t appreciated how much the empty bag weighed until it was pointed out to me by my friendly gate agent.

Canon 45mm T/S: A new purchase just before I left and first impressions are great. It’s a little softer at f2.8 but by f3.5 is nice and sharp as long as you nail the focus, which is manual only. This thing was absolutely awesome for some of the product photography I had to do for a catalog. Total control of the plane of focus allowed me to control exactly which elements of the product you were drawn to in the photos. Manual focus was not a problem when combined with live view on the 5dMKII. I also found myself reaching for this lens for full length portraits too instead of my 50mm lens. In fact my 50mm lens did not get touched once on the whole trip. Played with the lens a little bit for action shots too, novelty value is there but could get old pretty quickly.

Elinchrom Ranger: Apart from the traveling problems I experienced with this, it worked flawlessly as usual and I used it nearly every day for product shots , portraits or action. Taking this with me on a trip is a no-brainer. One decision that I did make before I left was to only take metallic reflectors with me and leave other light modifiers behind such as softboxes. I had no problems with this, the light quality from the ranger with a bare bulb is beautiful and it did the job admirably. I took the huge sports reflector with me but found that I could have easily coped with the smaller standard reflector and the medium sized one with a 20 degree grid.

Support: 1 tripod, 1 monopod, large 12ft lightstand, 4ft lightstand and a manfrotto magic arm. I could have left the monopod at home, only used it a couple of times. I took it to use shooting some pipe but in the end i could have accomplished the same thing with the 4ft lightstand. The magic arm didn’t get used more than once but i’d still take that with me. I find that when i need that thing, there is nothing else that will do the job and it’s saved me a few times in the past. I ditched the regular sized super clamp this time and just took the new nano clamp to go on the end of it but this was a mistake. It is not strong enough to support a 1 series camera and I snapped off the end of a spigot inside one of the threaded holes on the clamp. Next time I will take the super clamp too and just keep the nano for holding small flashes.

Long lenses: I had my 300mm lens with me but I was surprised how little I actually used it. When sledding in the BC backcountry I use it all the time but I could probably have left it behind this time. To save a little weight one day I took my 1.4 teleconverter with me and my 70-200 f4 L IS. I had never used this combination before, not since I sold my 70-200 f2.8IS. With the 2.8 version of the lens I was never happy with the 1.4x, in fact I hated it. However this time, with the 70-200 f4 IS I was amazed at the quality! With the old 2.8 lens you could tell from a mile off which shots had been taken with the teleconverter, but this time, with the f4 lens I actually had to check the EXIF data most times to figure it out!! You need to stop it down a tiny bit, but overall I was very impressed by it and wouldn’t hesitate to use it again.

Small Flashes: I took 4 Nikon SB-80DXs with me. I could have easily managed with just 2 of them

Pockewizards: I gave the TT1 transmitter one last try but the only time i tried to use it, it failed to learn the channel I needed it to and then I couldn’t get it to transmit at all. Still total junk. All my old plus IIs and multimaxes were just fine though.

Pelican 1610: This is the case that I pack my flash gear into. Before I bought the case I studied the specs on several cases. The trick is to get a case that gives you a good volume to weight ratio. Some of the larger cases are so heavy even when they are empty that it leaves you very little allowance to put gear in before you max out at the 32KG limit enforced by airlines. The 1610, packed with a ranger system including a spare battery, 4 pocketwizards, 4 small flashes, and a couple of small light stands weighs in at exactly 32KG. The Ranger head and the battery pack are packed into modular inserts made by F-Stop. 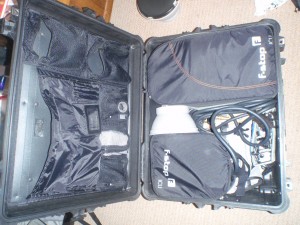