Those of you who follow this blog will remember that a couple of weeks ago I sold my beloved 70-200 2.8 L IS lens. The lens that has shot the majority of my ski photos for the last few years. I replaced it with it’s smaller and lighter brother the 70-200 f4 L IS. Having spent a couple of weeks using it now I thought I would confirm my initial suspicions. I LOVE this lens. As I sold my old lens I have no way of doing any direct comparisons but if that’s what you want to see then check here.

At first I just couldn’t believe how small and light this thing felt compared to my old one. It weighs 760g compared with the 1470g of the 2.8 version but it feels even lighter and is fully half the diameter.  The difference in the weight of my pack feels considerable and everything fits inside much better now since i don’t have to carry the frustratingly large hood for the 2.8. Below is a shot taken with this lens just yesterday in Whistler along with a 100% crop of the skier in the shot (Riley Leboe). Just take a quick look, it holds plenty of detail. So far no regrets, I have also picked up an 85mm 1.8 lens to fill the short tele large aperture gap that I had by selling the 2.8 and i’ll put that to the test very soon too. For now though, this is my new favorite lens! 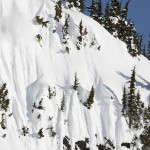 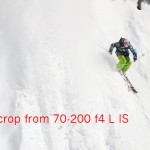